You are here: Home / Archives for Representative Alan Gray

A new bipartisan caucus has been rolled out to track information and cleanup efforts about places in Missouri with nuclear waste.

For years, many St. Louis County residents near Coldwater Creek have reported a number of health problems, including cancer, autoimmune disease, children born with deformities and some cannot have children. They say World War II era nuclear weapons waste and underground fire fumes from a nearby landfill are contaminating the ground, air, and water. 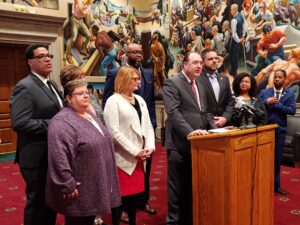 The Environmental Protection Agency is forming a plan to dig up and remove radioactive material posing a public health threat at the West Lake Landfill in the St. Louis suburb of Bridgeton. The plan calls for excavating about 70% of the contaminated waste and permanently capping the site. That percentage is expected to increase as crews begins digging. Work is not expected to begin there for about another 18 months.

EPA officials are scheduled to meet in about two weeks with local members of Congress and the community. The hope is to have a start date on the work during that meeting or shortly after.

During a press conference today at the Missouri Capitol, Chairman Doug Clemens, a St. Ann Democrat, says the turning point for him to form the caucus came when he saw copies of a report in recycle bins at the Capitol detailing Missouri’s radioactive waste sites. He says the launching the caucus is a big step in holding the federal government accountable.

“No one knew what they were. We need a body that provides institutional memory after Representative Chappelle-Nadal is gone, after I’m gone. We need somebody else who understands the situation to be able to sit on top of federal government oversight and possibly design legislation if need be,” says Clemens.

He says the feds have not been good about letting residents know what lies beneath.

“We have backyards in north St. Louis County, which have this stuff in it, right there next to somebody’s house. They haven’t cleaned them up yet,” he says. “One of the things that we need to combat here is ignorance about the situation – just letting people know. There’s more to this than what appears on the surface or what we’ve heard about.”

Clemens says the group wants the U.S. Department of Energy to get a budget increase or reallocate funds to Missouri to cleanup these sites sooner.

Representative Maria Chappelle-Nadal, a Democrat from University City, whose district includes St. Louis County, has been raising these concerns for years.

“In my investigatory work, I have found other landfills that have nuclear legacy waste in them,” she says. “One of those places – there is an Amazon distribution center sitting right on top of it today.”

Chappelle-Nadal is sponsoring House Bill 2225 this session that would require public hearings to be held prior to building on top of a landfill, to determine if testing for radioactive materials should be done. Testing would have to be conducted before a land use permit could be issued. The measure would also require St. Louis County to compile and keep a list of historic landfills in the county and make the list available to the public.

Chappelle-Nadal has held numerous town halls about radioactive contamination problems in her area and has learned a great deal of information from citizens about the history of nuclear waste sites, health problems area residents are having, among many other things.

As a young girl, she remembers going down St. Louis Avenue and seeing nice, new houses.

“Little did I know, until a couple of years ago, that the reason why these homes are experiencing subsidence, is because there is a landfill underneath them. I don’t think it’s right that people are living on top of landfills,” she says.

Another related measure that has been filed this year would strongly urge the U.S. Army to explain chemical testing that occurred in St. Louis in the 1950s and 1960s. Representative Kevin Windham’s proposed resolution, HCR 69, would request the federal government to conduct a study on the health effects of such tests.

Other caucus members include:

63043 is the zip code next to West Lake Landfill referenced in the link directly below with elevated childhood brain cancers.