You are here: Home / Archives for Rep. Louis Riggs 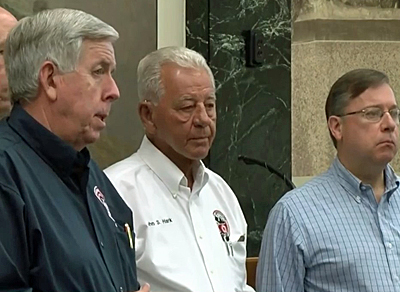 The Mississippi River has been receding in Hannibal, where the levee held and the town was protected. The river topped at one foot shy of the record flooding in 1993.

After hundreds of volunteers, National Guard troops and inmates helped flood-threatened areas in northeastern Missouri, residents are expressing their thanks and relief.  (See coverage from TV partner WGEM)

Now the next step: the damage must be assessed and cleaned up. State Representative Louis Riggs, R-Hannibal, tells Missourinet “the damages are considerable.”

“The cleanup itself is the easy part, assessing the damage is not.”

This will be considered the second major flooding event for the state, and a second, separate disaster declaration and federal aid request.

“The process itself is rather burdensome,” Riggs says, “and involves crunching numbers, authenticating them and six to nine months, even up to a year.”

For farmers, the harvest is missed or cannot get down the river.

River traffic is slowly returning, but not the most important water transportation to this area: barges to carry grain to market.

“I have not seen any barges on the Mississippi now for months, Riggs says.  “Hundreds of thousands of some of the best acreage in the world will not be producing this year so that is one set of damages to sort out.”

In the meantime, Riggs and Hannibal residents are looking to the river to relinquish some ground for something to celebrate.

“We’ve been told that we can expect to be down to normal flood stage as early as June 29, depending on rainfall, so probably close to July 1. July 4th is the biggest event of the year, so it would be nice to have our riverfront back by then,” Riggs adds.