You are here: Home / Archives for Raytown School District 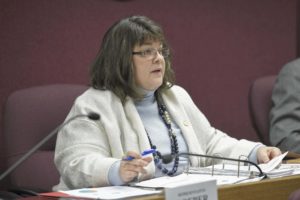 “Had been released from the hospital somewhat recently and we thought she was on the mend,” Haahr says. “She was on a family vacation in Colorado and passed away in the night.”

Roeber, who was first elected in 2014, chaired the House Elementary and Secondary Education Committee. She supported legislation that would have allowed charter schools to expand to Missouri cities and charter counties with a population larger than 30,000.

Speaker Haahr says Roeber “will forever be remembered for being a champion for Missouri’s students.” He says she had a passion to see children develop the tools to succeed in life.

“An incredibly kind person, incredibly talented and cared so much about education, about giving kids the best opportunity forward and it’s a tragedy for the House to lose her,” says Haahr.

Before being elected to the House in 2014, Roeber served as a teacher in the Raytown school district for 17 years. Raytown is a Kansas City suburb.

Haahr tells Missourinet that Roeber was respected by lawmakers in both parties.

“Even when she could be firm, she never seemed angry or upset with people that she worked with and she was just liked across the aisle, universally by everyone,” Haahr says.

After the crash, Roeber did not return to the Statehouse in Jefferson City for the rest of the 2019 session. Speaker Haahr told Missourinet in May that she would need to learn to walk again.

Funeral arrangements for Representative Roeber have not been announced yet.