You are here: Home / Archives for rape

A rift has formed between U.S. Senate Democrats over the best way to improve the military’s handling of sexual assault cases. 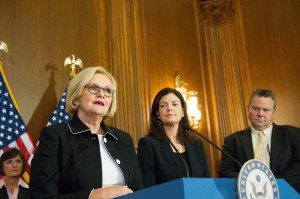 Military unit commanders have the say in whether prosecution of soldiers under their command for serious crimes, proceeds. One proposal from Senator Kirsten Gillibrand (D-New York) would give that final decision to Judge Advocate General attorneys.

Senator Claire McCaskill (D-Missouri) backs proposals that she helped write,  in a defense bill approved last month by the Senate Armed Services Committee. Those make other changes but keep the decision whether to proceed with prosecution with commanders.

McCaskill says it will better serve victims in several ways, including affording greater protection to victims from retaliation.

McCaskill also refutes arguments made by backers of Gillibrand’s proposal that countries using systems that hers would mirror would see more reporting and prosecution of assaults.

“None of the nations that have changed their systems have had an increase in reporting. The data does not support that position. Secondly we know that literally dozens and dozens and dozens of cases just in the last two years, prosecutors turned down the cases and commanders said, ‘Go ahead.’ We know that if prosecutors are the last say, that we will have fewer prosecutions.”

Several retired military women joined Senator McCaskill at a media conference to offer their support for the proposals. 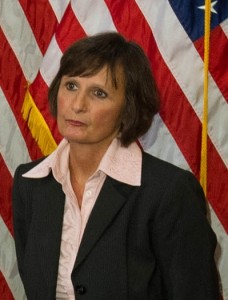 Retired Army Judge Advocate Lisa Schenck says those proposals would empower victims, including through the requirement that a Special Victims’ Counsel be provided to offer legal advice and assistance to service members who are victims of sexual assault by a member of the U.S. military.

Both plans have bipartisan backing.

McCaskill’s position has earned her criticism from some former supporters, including a Navy veteran who was raped in 1986, campaigned for McCaskill last year and now has been featured in a half-page ad in the St. Louis Post-Dispatch calling McCaskill’s approach misguided.

The Armed Service Committee’s proposals would still strip commanders of authority to dismiss court-martial convictions for most offenses and require that any case in which a commander overrules the advice of a Staff Judge Advocate to proceed to court-martial be referred to the civilian Service Secretary for a final decision.

Other changes they would make are:

· Require a commander, when serving as a convening authority in a military court-martial, to provide written justification for any modifications made to a sentence

· Require a commander, when serving as a convening authority in a military court-martial, to receive input from the victim before arriving at any decision during clemency proceedings

· Require that a person found guilty of an offense of rape, sexual assault, forcible sodomy, or an attempt to commit any of those offenses receive a punishment that includes, at a minimum, a dismissal or dishonorable discharge

· Ensure the military has the authority to move an individual accused of sexual assault from a unit to protect a victim from unwanted contact with their alleged attacker, while sustaining a victim’s right to request expedited transfer

· Provide for study of the military’s ability to create a database of information regarding those accused by victims in restricted military reports-meaning the victim chooses to not have the information given to law enforcement, commanders, or others to facilitate potential prosecution-such that serial offenders might be identified and victims might be encouraged to make unrestricted reports that allow for prosecutions in those cases

· Remove the past performance and character of an accused from those factors that may be considered by a commander, when serving as a military courts-martial convening authority, in deciding whether to refer a case to court-martial

· Provide that in sexual assault cases in which a Staff Judge Advocate and a Commander, when serving as a military courts-martial convening authority, agree that a case should not proceed to court-martial, the next higher military commander also review this determination

Missouri’s Republican Senate Candidate wasn’t at the Republican National Convention, but he’s expected to have a presence at the Democratic National Convention. Democrats and Republicans alike continue to criticize Todd Akin for saying a doctor told him that a woman’s body can biologically “shut down” a pregnancy when she is raped. 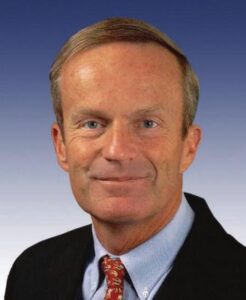 National Republican Convention delegate Chris Howard of Ballwin says he expects a lot of time to be spent on those comments at the DNC. “Ironically, I think they have to be very careful. They could push it way too far and the backlash actually saves Akin and he still beats Claire McCaskill, if they push it too far.”

Republican National Committee member Catherine Hanaway says Akin’s comments were indefensible. “Absolutely everything that he said in characterizing rape as anything other than a heinous crime I vehemently disagree with, but the point that an innocent child’s life should be protected I completely agree with. You can’t punish that child for the crimes of his or her father.”

Hanaway says voters should remember several things about Akin. “The fact that he is not the only candidate running in Missouri, he is not a close advisor to (former governor Mitt) Romney or Congressman (Paul) Ryan, and he isn’t the person that will be sent to the White House … that this election really is about who’s going to lead the free world.”

Hanaway urges Republicans not to lose sight of the party’s goals over the Akin controversy. “We need to beat Claire McCaskill and take a majority in the United States Senate.”

With activities on the first day of the Republican National Convention postponed, discussion continued to focus on the comments last week by U.S. Senate Candidate Todd Akin about abortions in cases of rape. 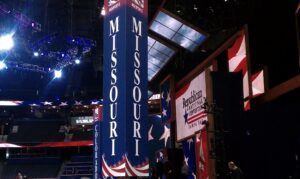 Missouri Republicans hope a full slate of activities today at the party’s National Convention will draw discussion away from Todd Akin’s comments regarding abortion in instances of rape.

Two prominent Missouri Republicans say they believe a Republican can still beat Senator Claire McCaskill in November.  They continue to call on Akin to withdraw and make way for some other candidate.

Senator Roy Blunt says, “I think we win the Senate race if Todd is not the candidate.” Blunt says Akin, “is a good man who needs to think about the impact he’s having on the greater national interest.”

Former senator Kit Bond says, “Not only if (Akin’s on the ballot) is the Senate seat gone, he endangers the whole ticket.”

Bond says of Akin’s comments, “I have been a supporter of the right to life position … but what he said was not only insensitive, but wrong. He’s apologized but it’s still there.”

Bond says based on the latest polls, “(Akin) has actually brought Barack Obama up to lead Mitt Romney in Missouri, and I understand they’re going to feature Todd Akin in the Democratic convention as a means to get the nation to vote Democratic.”

Blunt says the Akin situation is detracting from debate of more pressing issues in the Senate race, and other races, like,  “Jobs, and energy and healthcare and the things that Governor Romney has said this should be about.”

Cross says Akin misspoke when he suggested that doctors have told him that when a woman is raped her body has ways to prevent a pregnancy from occuring. “I wish what he had done was say something along the line, ‘There is a theory out there,’ and quote the doctor … that would have saved him a lot of embarassment.” Cross adds, “I do believe he sincerely has apologized. He certainly has apologized enough for me.”

Cross dismisses the idea that Akin staying in the race hurts the Republican party, saying instead that Akin withdrawing would hurt the party by dividing its vote. “They were saying, ‘You step down or we’re going to have a write-in candidate.’ Well as soon as we have a write-in candidate, guess what? Half of them vote for Akin, half of them vote for the write-in and we get Claire McCaskill again … for the good of the party we ought to get behind him.”

Republicans on both sides of the Akin debate hope the return to the business of the Convention today will take some attention off of that issue. Most events on Monday were postponed due to concerns over Tropical Storm Isaac.