You are here: Home / Archives for Randy Asbury

Missouri stakeholders are taking a “wait and see” attitude about the study of a proposal to funnel water from the Missouri River into western Kansas to irrigate crops and replenish the Ogallala Aquifer. The proposal is that during times of high water or flooding on the Missouri, as much as 4 million acre-feet of water could be diverted. The study is expected to begin next year and take 18 months. 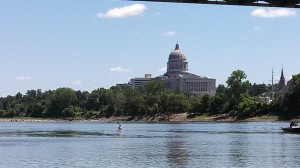 A kayaker travels on the Missouri River past the State Capitol at Jefferson City.

Randy Asbury is the Executive Director of the Coalition to Protect the Missouri River. He says the concern among Missouri stakeholders is that once an aqueduct is built, its beneficiaries will lobby to increase when it is used and how much water it provides.

“Is this just the camel’s nose coming under the tent?” asks Asbury. “At a time when water is needed, if the infrastructure’s in place, if the aqueduct is operating, would they then want water not only in flood events but also at other times?”

He says stakeholders in Missouri have seen such escalation with other issues regarding River management. He says an example would be when the Master Manual for Management of the River was developed.

“We saw at that time that as people had opportunity to push for something for their state’s interest, many times they didn’t want what they originally requested, they wanted more.”

Asbury says 4 million acre-feet is no small amount of water.

“That amount of water, taken at an inopportune time, could be very devastating even to municipal water supplies or to electric generators in this area. They have to have water to get into their intakes.”

Asbury says while the issue is only the subject of a study, stakeholders in Missouri are watching to see what develops. He says there is a belief that the project will prove too expensive to pursue, after a 1982 study put the cost at $3.6 billion dollars at that time. That cost today could be as high as $25 billion.

The “wait and see” attitude could change quickly, however.

“I’m confident there would be many attorneys lined up by many organizations to fight this, so it’s not something that would be conceded at any point if ever there was the opportunity for this to actually take place. There would be legal challenges galore around it.”

Kansas officials are preparing for legal challenges, however. The Shawnee Dispatch in Shawnee, Kansas reports State Representative Sharon Schwartz (R-Washington) recommending, “you might want to put money in our litigation fund,” at a recent rollout for the study.

The Shawnee Dispatch also reports that Officials in Kansas view the Missouri River diversion as the best option for bolstering the Aquifer that stretches from Nebraska to Texas. A groundwater management district in Garden City, Kansas, has considered filing an appropriation for water rights from the Missouri River in anticipation of litigation.

Asked whether Missouri stakeholders should be speaking up more now, Asbury says to do so might have them getting ahead of themselves.

“I think there is adequate time here, if there is a need to oppose it, to do so.”

Governor Jay Nixon has not held back his disagreement with the proposal, however, penning a letter last week to Kansas Governor Sam Brownback urging him to scrap the plan.

Two pieces of legislation have advanced in the House that stem from what has been learned about the failure of the Mamtek sugar refinery project in Moberly. Both were offered by the representative who chaired the committee that studied that deal, Jay Barnes (R-Jefferson City). 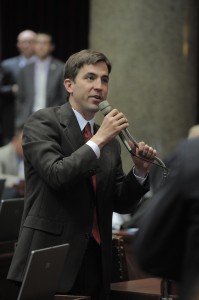 One is an amendment to HB 1455, which changes the Manufacturing Jobs Act. The other is a stand-alone bill, HB 1865. There are differences between the two, but some key provisions are found in both. They would require up-front verification of financial information by start-up companies applying for incentives, the sharing of “adverse” information received about a company and the creation by the Economic Development Department of a rating system for proposed projects. Barnes says he wanted to offer both so that the language has two opportunities to become law.

The proposals met with some opposition, especially from lawmakers who say they’ve heard from economic developers in their districts that the language goes too far. Barnes disagrees, “What my fear is, is that we haven’t gone far enough. There are a lot of other provisions our committee decided not to put forward because we wanted to put forth a proposal that should have overwhelming support from a body that generally supports protecting taxpayers. What we have is not as long as I’d like it to be.”

One of those who opposed the bill is Representative Denny Hoskins (R-Warrensburg). Of the provision that “adverse” information about a company should be shared, he said, “It seems like a big judgement call for these economic development corporations, also the Department of Economic Development, to determine what is ‘adverse’ and what is not ‘adverse.’ This might mean that all the companies would have to disclose all the information, and therefore be to the detriment of economic development in the state of Missouri.”

The representative whose district includes Moberly, Randy Asbury (R-Higbee), opposes the proposals. “As I read this legislation I’m unconvinced the outcome would have been any different had this new layer of beaurocracy been in place prior to Mamtek’s debut.”

Asbury disputes the requirement that start-up companies provide verification of financial information. “Just because we request financial verification for start-up companies does not mean anyone at any agency is qualified to make a better decision based on that information.” Mamtek provided a financial statement saying it had $7.2 million in cash or equivalent, but that was never verified by a third-party.

Both pieces of legislation can advance to the Senate on another positive vote. Both are likely to be voted on today.