You are here: Home / Archives for Rainy Day Fund

Missouri’s state auditor used a Tuesday press conference in Jefferson City to call on Governor Mike Parson (R) and the GOP-controlled state legislature to create a new budget tool to ensure the state is prepared for a recession. 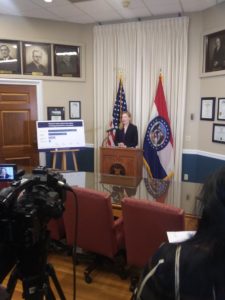 The governor’s chief of staff dismissed the press conference as political.

Democratic Auditor Nicole Galloway tells Capitol reporters that the state’s “Rainy Day Fund” is maintained at a level well below other states.

“The report I am releasing today shows that Missouri is woefully unprepared for an economic downturn. In fact, Missouri is among the least prepared in the nation to weather a recession,” Galloway says.

The official name for the “Rainy Day Fund” is Missouri’s Budget Reserve Fund (BRF). Galloway says the state is using the fund for day-to-day expenses, like payroll. Galloway says state lawmakers and Governor Parson’s administration “have failed to responsibly plan for the future.”

“According to a 2018 stress test from Moody’s Analytics, Missouri rated 43rd in the nation in terms of preparedness for a moderate economic downturn,” says Galloway.

Galloway says more than $360 million has been borrowed from the fund every fiscal year since 2011, which also dates back to former Governors Jay Nixon (D) and Eric Greitens (R).

She is warning that the state will have to cut critical services or raise taxes during a recession, unless lawmakers take action to protect the Budget Reserve Fund. Galloway tells the Capitol Press Corps that governors have relied on the fund to supplement cash flow throughout the year.

“And in both fiscal years 2017 and 2019 when Missouri’s economy has been stable and growing, the state borrowed more than $500 million from the budget reserve fund,” Galloway says.

The BRF was approved by 59 percent of Missouri voters in 2000. Galloway says the Budget Reserve Fund’s balance was $616 million, at the end of the 2018 fiscal year.

It was preceeded by two different funds, the Budget Stabilization Fund and the Cash Operating Reserve Fund, which were created in response to the recession in the early 1980’s.

Galloway is the likely Democratic gubernatorial candidate in 2020 against Governor Parson. The governor’s chief of staff, Aaron Willard, issued a statement to Missourinet after the press conference, saying it was political.

“It is no surprise Nicole Galloway is following the national liberal Democrats’ playbook attacking Missouri and our country’s booming economy, especially given the fact that she opposes pro-growth policies that have led to the largest increase in real incomes, historically low unemployment, and nearly 40,000 new jobs created in Missouri. She also has ignored the truth that Governor Parson left over $100 million in his budget specifically for cash flow purposes and that Missouri enjoys a AAA bond rating. The Auditor also never used her official office in a capacity to criticize Governor Nixon, whom appointed her, over the BRF when budgets were tighter and reserves were lower. It’s obvious that truth and results matter less to Nicole Galloway than political stunts mimicking tactics used by (U.S. House Speaker) Nancy Pelosi and (Senate Minority Leader) Chuck Schumer,” Willard’s statement reads.