You are here: Home / Archives for Quality Jobs Program

A House Committee has held its first hearing digging into the Quality Jobs Program. 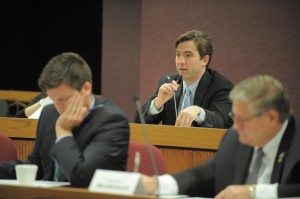 Representative Jay Barnes (speaking) says the committee on Government Oversight and Accountability will meet Friday, February 8 in Kansas City to talk about the Quality Jobs program and “What to do about Kansas.”  (Photo courtesy; Tim Bommel, Missouri House Communications.)

The House Committee on Government Oversight and Accountability was originally formed to study the failure of a project to bring a sucralose refinery and more than 600 jobs to Moberly. Its chairman, Representative Jay Barnes (R-Jefferson City), acknowledges the Quality Jobs discussion began with the Mamtek investigation.

“It was just a catalyst to allow myself a platform to get people asking the first real questions about the Quality Jobs Act.”

Barnes notes there have been some success stories, however, and says his goal is to find how to have more of those and fewer failures.

He says one way to achieve that might be to give the Department of Economic Development more discretion in what projects are approved for Quality Jobs incentives.

“Right now, as we heard the testimony, there is no discretion. You come in, you make certain promises, you get the tax credit automatically. What we know happened in Mamtek is the executives from Mamtek used that and some other things as leverage to put pressure on local communities for the offering of local government bonds which ended up in a tremendous failure.”

Proponents of Quality Jobs argue that in failures such as Mamtek, the project received no incentives because certain thresholds in job creation and other factors were not met. Barnes says there’s more to it than that.

“There’s two responses to that. The first is that the Quality Jobs Act authorizations are used in some scenarios to leverage local government resources or other resources in which taxpayer money is expended up front. We know from Mamtek that is what happened. The second issue is that these programs have caps … and every dollar authorized for a business that has no business receiving the authorization is a dollar that can’t be spent on a business that might actually create jobs.”

He also says the time spent by Department employees on failed projects is also wasted.

The committee also heard from the Director of the Institute for the Study of Economics and the Environment at Lindenwood University, Professor Howard Wall. He told the committee that academic economists view tax credit programs as “completely ineffective.”

He says the Department’s claim that Quality Jobs has created more than 11,000 new jobs over its life is hard to back up.

“There’s a credit authorized and a factory is set up then people are employed. That’s usually what’s called ‘jobs created.’ Maybe those were created by the credit, maybe they would have existed anyway. Also, that’s not taking into account the negative effects on employment everywhere else because those workers typically came from other jobs, other employers who might now shut down because they can’t get workers.”

“Politically speaking I believe it would be impossible. I have much sympathy for the professor’s position that it ought to be scrapped in total. However, I know that it has bipartisan defenders in [the Capitol] and I know that’s not going to happen.”

Barnes says the next step for the Committee will be a hearing at Union Station in Kansas City to discuss, “What to do about Kansas.”

He says the two topics are, “absolutely related, because the Quality Jobs Act is used as a measure of competition with the State of Kansas.”

Barnes says discussion of improving the quality jobs act will be one of the subjects at that hearing, as well as reducing taxes, which he says would do more to create jobs than all jobs tax credits combined.

The House Committee that last year dug into the failed Mamtek deal at Moberly will now turn its attention to one of the incentive programs administered by the Department of Economic Development.

Representative Jay Barnes (R-Jefferson City) says work by the Committee on Government Oversight and Accountability last year, and a report by the State Auditor’s Office, say the Quality Jobs Program could be oversold and under-performing.  Barnes chairs that committee.

He says the Auditor reported two things. “They first is that they had lax oversight and the second was that the program did not deliver as advertised on the front end … that there were a lot of ballyhooed press announcements and press releases on the front end but then when you came back a year or two years or three years later, there weren’t any jobs created. I think when you look at the record of massive announcements like in Mamtek what you find is a string of epic failures.”

The Committee in January announced it had reviewed a list of 91 projects that received more than $1 million in state incentives in the past six years. Those projects reported creating only about a fourth of the more than 20,000 jobs they projected. Among them, Mamtek had been awarded $7.6 million in Missouri Quality Jobs Program tax credits and produced no lasting jobs. Barnes said at the time that raised questions about the performance of Quality Jobs.

Barnes says as Governor Jay Nixon calls back together his Bi-Partisan Tax Credit Review Commission, and as some state senators push again for tax credit reform, the Quality Jobs Act has not been brought up.

Barnes is critical of the Governor’s tax credit review commission, saying it failed to look into Quality Jobs in its initial review and lacks any active state legislators. He says the group was not interested in asking difficult questions about the program.

Barnes expects the Committee to begin where it left off. “I simply asked for that list to be updated, and then we start hearing testimony on whether an employer being able to keep the withholding taxes from new hires for a short window of time is actually a sufficient incentive to have employers create new jobs, or whether its, ‘Hey, we’re going to create new jobs. How much money can we get from taxpayers on top of what we’re already going to do?'”

“More than a year after the Mamtek disaster, the Department of Economic Development chugs along with Quality Jobs Act authorizations accompanied by other public benefits and often high-profile press conferences. Unfortunately, recent reviews of the Act have shown that it may be oversold and under-performed.

“Last year, an investigation by the House Committee on Government Oversight and Accountability revealed that five out of every six Quality Jobs Act authorizations failed to deliver as promised and only about one in four jobs promised under the Act have actually been realized. Following our investigation, Missouri Auditor Tom Schweich released a blistering audit of the program, concluding, as our committee did, that (1) the number of jobs created has been vastly overstated; and (2) the Department of Economic Development conducted inadequate oversight of the program.

“In the past few weeks, both Missouri Senate leaders and Governor Nixon have announced intentions to consider thorough tax credit reform in the next legislative session. Governor Nixon recently announced the re-formation of his Tax Credit Review Commission, a group of 27 people hand-picked by the governor that does not include a single active legislator. Unfortunately, the Governor’s Tax Credit Review Commission failed to make any investigation into whether the Quality Jobs Act was delivering as promised. From the Committee’s 2010 report, it is apparent they were not interesting in asking difficult questions about the program’s efficacy.

“Missouri taxpayers deserve better. They deserve elected leaders willing to look at all tax credits for potential reform – even those favored by the powerful and politicians who like using them to claim false credit for “creating jobs.” The House Committee on Government Oversight and Accountability will go where the Governor’s Tax Credit Review Commission didn’t and won’t.” 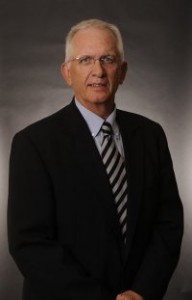