You are here: Home / Archives for Proposition D

A former state lawmaker who’s been appointed to the Missouri Public Service Commission (PSC) is grateful for the appointment, and is pledging to focus on protecting Missouri utility ratepayers. 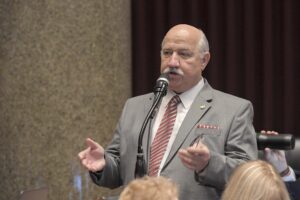 Former State Rep. Glen Kolkmeyer (R-Odessa) served eight years in the House, from 2013 to 2020. He was forced out by term limits. Mr. Kolkmeyer is also the former Missouri Propane Gas Association president, and served as Wellington-Napoleon’s fire chief from 1982-2002.

“Three weeks ago, I was extremely honored when Governor Mike Parson called and asked me to serve on the Missouri Public Service Commission, as a commissioner. I was just extremely honored,” Kolkmeyer says.

The PSC regulates investor-owned electric, natural gas, steam, water and sewer utilities in Missouri. The PSC also has some jurisdiction over telecommunication providers in Missouri.

“Honestly, I don’t know that I have any big priorities other than just protecting the citizens of Missouri with the utilities. That’s really my one and only goal and focus,” says Kolkmeyer.

Kolkmeyer is a former chairman of both the Missouri House Transportation Committee and the House Administration and Accounts Committee. He tells Missourinet that he learned a lot about utilities, while serving in the House.

“I served on (the Missouri House) Transportation (Committee) all eight years and we dealt with a few of these issues. Also, issues on the (House) floor, but I also served two years on the Utilities Committee in the House,” Kolkmeyer says.

He was a leader on transportation issues in the House, and pushed unsuccessfully for a ten-cent gasoline tax increase in November 2018. Proposition D, which was rejected by voters, would have provided the state Department of Transportation (MoDOT) with additional funding. Missouri’s 17-cent per gallon gas tax has remained the same since 1996.

Kolkmeyer, who represented Jackson, Johnson and Lafayette counties, was re-elected to his fourth and final House term in 2018. He received about 69 percent of the vote to defeat Democratic challenger Connie Simmons.

Meantime, former Missouri House Speaker Elijah Haahr (R-Springfield) is praising the appointment, tweeting that he’s proud and excited for Kolkmeyer. Speaker Haahr describes Kolkmeyer as one of the best in the Missouri Legislature.

His appointment requires Missouri Senate confirmation, and he will go before the Senate Gubernatorial Appointments Committee. A hearing date hasn’t been set yet.

Click here to listen to the full two-minute interview between Missourinet’s Brian Hauswirth and former State Rep. Glen Kolkmeyer (R-Odessa), which was recorded on April 2, 2021:

The state’s lieutenant governor says Missourians will have to decide whether a gasoline tax increase is needed. 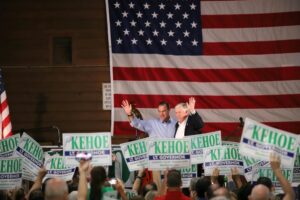 At his campaign announcement last week at Jefferson City’s Memorial Park, Lieutenant Governor Mike Kehoe (R) told the audience that a long-term solution is needed for transportation. Missourinet asked him that night if a gas tax increase is on the table. Kehoe says Missourians will have to decide that.

“As you know, our Hancock Amendment prohibits the Legislature from coming up with that solution, that’s probably a good thing most days,” Kehoe says. “So we’ll see what Missourians think is the appropriate response.”

Missourians approved the Hancock Amendment in 1980. It’s named after the late Springfield businessman Mel Hancock, who was elected to Congress several years later. The Hancock Amendment essentially requires voter approval before taxes can be increased by lawmakers, beyond a certain annual limit.

Kehoe says a long-term solution is needed, for the safety of Missouri families and for the reliability of our businesses.

“When you have the (nation’s) seventh-largest infrastructure system and you’re 49th in funding, it doesn’t take long to figure out you need a long-term solution. We’re all willing to listen to what Missourians think is the most reasonable approach to that, and then we’ll figure it out,” says Kehoe.

“What the mayors here (at the Branson conference) understand is they couldn’t run their city budgets and Missourians couldn’t run their household budgets if they didn’t have any extra income for 22 years straight,” Kehoe said that day.

The state Department of Transportation (MoDOT) has said that if voters had approved Proposition D, it would have generated about $288 million annually in new road and bridge funding.

Click here to listen to the full interview between Missourinet’s Brian Hauswirth and Lt. Governor Mike Kehoe, which was recorded on September 23, 2019 at Jefferson City’s Memorial Park: