You are here: Home / Archives for proposed Missouri supplemental budget

The state operating budget and a proposed $1 billion-plus supplemental budget will dominate attention in the Missouri House, when state representatives return to Jefferson City after spring break. 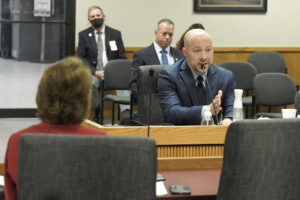 The Legislature is on its annual spring break this week, and lawmakers will return to the Statehouse on March 22.

Missouri Governor Mike Parson (R) is recommending a proposed $34.1 billion state operating budget. House Budget Committee Chairman Cody Smith (R-Carthage) says the plan is for the House to give final approval to that budget, during the week of March 29.

“If things go according to plan, the second week after we’re back (the week of March 29), we could be looking at perfecting and third-reading the budget and sending it over to the Senate. So, that’s our schedule and we’re on schedule so far and our intention is to try to get it done in time enough to send to the Senate and give them adequate time for their consideration,” Smith told Capitol reporters on Thursday.

House Speaker Rob Vescovo (R-Arnold) says Chairman Smith will be working on the state budget, during the spring break. The state Constitution requires Missouri lawmakers to approve a balanced budget, by early May.

The Parson administration is also proposing a $1.67 billion supplemental budget. Much of that involves federal dollars.

“We’ll be taking it back up when we get back from (the legislative) spring break. We’ll go through the committee mark up process and vote it out,” Chairman Smith tells Missourinet.

The January report also noted the Missouri State Fair has had to buy substantial amounts of janitorial and sanitizing supplies, along with a large quantity of additional signage to help ensure the safety of staff and event participants.

The January report notes that the State Fair has a long history of meeting its operational costs with its own fee revenues, which is the State Fair fee fund.

The Office of Administration (OA) notes attendance at the 2019 Missouri State Fair in Sedalia was 337,112. Because of the COVID pandemic, the 2020 state fair was a youth livestock show only. The OA report says the percentage of the State Fair’s operating budget paid by state fair fees was 89 percent in 2019, before the pandemic struck.

Missouri’s current state operating budget is about $38 billion, which includes about $7.4 billion in supplemental budgets with federal money.