You are here: Home / Archives for professional license fees

A veteran Democrat on the Missouri House Budget Committee will be leaving Jefferson City at the end of the month, after losing a Senate race to State Sen. Andrew Koenig, R-Manchester. 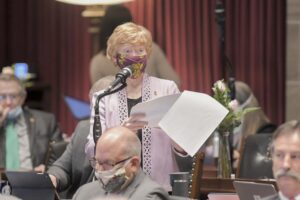 State Rep. Deb Lavender, D-Kirkwood, was elected to the House in 2014 and served three terms. She’s most proud that Missourians approved Medicaid expansion in August.

“I guess what I can say I’m proud about is my individual district (the 90th in St. Louis County) passed that by 70 percent,” Lavender says. “So I think my six years of educating my district why Medicaid expansion is important, I think that’s the first thing for the state of Missouri that I think is the best thing that’s happened in a long time.”

Medicaid is a federal and state program that assists with medical costs for residents with limited incomes. 53 percent of Missouri voters approved Amendment Two, which will provide healthcare to Missourians who earn less than $18,000 annually.

Lavender is hopeful that some of the rural hospitals that have closed in recent years will re-open, now that Missouri voters have approved Medicaid expansion. She says the issue is important statewide.

“We’ve closed ten hospitals over the last decade and especially in our day of the COVID virus right now, people are traveling to St. Louis for their medical care,” says Lavender.

Amendment Two expands Medicaid for residents between the ages of 19 and 64 with an income level at or below 133 percent of the federal poverty level.

The Missouri Chamber of Commerce, Lavender and other supporters say Medicaid expansion will create more than 16,000 new jobs annually during its first five years, while increasing personal income by $1.1 billion annually.

Another issue Representative Lavender has tried to raise awareness about is fund balances. She is the ranking Democrat on the Missouri House Appropriations Subcommittee on health and social services.

Lavender says Missouri currently has more than 450 individual bank accounts, with $6.8 billion in the bank. She’s disappointed that more hasn’t been done in Jefferson City with the fund balances.

“What I have figured out is that there’s no one person accountable for fund balances,” Lavender says. “But in some cases, I think it’s a place where we have learned to hide money.”

Lavender questions whether all of that money is needed. She says if it’s not needed, it should be spent appropriately. She also supports decreasing some professional license fees.

Lavender says her future is still to be determined. She notes she has always practiced as a physical therapist during her time in Legislature, and has kept her physical therapy practice during the last 18 months of campaigning.

She’s also still interested in state government and in the fund balances. She emphasizes that she has enjoyed serving on the House Budget Committee, and in the Legislature.

Click here to listen to Brian Hauswirth’s full interview with State Rep. Deb Lavender, D-Kirkwood, which was recorded on December 7, 2020: