You are here: Home / Archives for presidential inauguration

Senator Roy Blunt says plans for Joe Biden’s presidential inauguration will not be derailed or changed after Wednesday’s deadly breach of Capitol security. 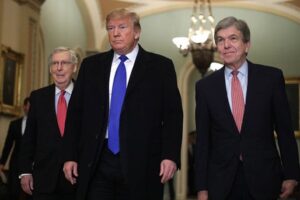 The senior Missouri Senator is overseeing the event on the behalf of Congress. He says he spent a lot of time Thursday with Capitol police and reviewing the FBI intelligence reports of the attack on the Capitol. The smaller inaugural crowd restricted to 3,000 because of COVID-19 concerns will be easier to handle than the typical 200,000 attendees, he said.

Blunt said “It’s the right decision” to hold the Biden inauguration at the same place that President Trump was sworn in four years ago.

“We will be outside and just as it was important to return to the Capitol as quickly as we could to the Senate and House Chambers, it is also important to send that message around the world that while we are dealing with a pandemic that our Democracy moves forward,” he told Missourinet.

Blunt, who serves on the Senate Intelligence Committee, said “the storming of the Capitol by these rioters was outrageous and very harmful to our position around the world. I’m sure our adversaries loved seeing those films and pictures all over the world. It was a big day for them and a poor day for us.”

Blunt stands by his statement that the president was part of creating the dangerous environment Wednesday.

President Trump has announced he will not go to Biden’s inauguration and, though Blunt said he had been talking with the president’s staff about Trump’s attendance, Blunt said he “does not have any argument with (Trump’s) decision on this.”

Vice-President Mike Pence is expected to be there and, as President-elect Biden did Thursday, Blunt said Pence’s presence will be welcome.

Blunt told Missourinet the public will see a different scene on January 20 than they did on January 6.

“We’ll have the kind of secure operation on the ground and in the air that we had four years ago and I think everybody will have a greater appreciation for how challenging it is to get this done this year than they may have ever had before,” Blunt said.

“I’d really like it if we were inaugurating the person that I voted for, but I’m going to respect the fact that the Constitution and the process work,” he said during a telephone interview Friday.

Missourinet asked: “Given what you’ve seen from President Trump now, would you vote for him again?”

Blunt replied: “I don’t have to make that decision, do I? I certainly voted for him in November. The foreign policy successes, the regulatory successes, the economic successes, what is obvious to me will be the incredible success in developing the vaccine…with the president’s leadership we got it done in nine months.”

“This is not a decision that needs to be made,” Blunt continued. “It’s kind of like spending time on Ted Cruz’s plan. It’s not anything I have to deal with and believe me I have plenty of problems to deal with that are real and immediate, rather than speculating on things that aren’t going to happen.”

Fellow Missouri Senator Josh Hawley’s objection to Electoral College results from Pennsylvania has prompted some Democrats in the Senate to call for Hawley to resign and a few Republicans have publicly rebuked Hawley, Blunt is not among them. Blunt told the Missourinet he and Hawley “have a great relationship.”

“He has a job to do just like I do and I’m sure he’ll do it. He’s very smart and I’m pleased to get the chance to work with him. We did not agree on this issue the day he announced this challenge, and Ted Cruz’s challenge,” Blunt said. “I think it’s time to move on and remember, half of the Republicans in the House of Representatives had a similar position.”

Blunt said any movement toward impeaching President Trump would also be as fruitless as Sen. Cruz’s plan to create a commission to review all of the state ballots.

“Frankly, I think he (Trump) has already paid a big price for keeping on the (election) topic and not allowing us to talk about many accomplishments he’s had as president,” Blunt said.