You are here: Home / Archives for Powersville

A state lawmaker who represents four rural northern Missouri counties is warning about the lack of gas stations near the Missouri-Iowa border, saying it’s a safety issue in his farming district. 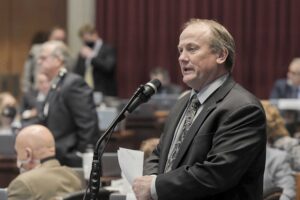 “Like I have to drive 25 miles … whether it be Milan, Unionville or Princeton to get gas. And within that 25 miles, there’s six little towns there that have gas stations located in them,” Busick tells our Moberly affiliate KWIX Radio.

Busick tells Missourinet that gas stations in those towns like Humphreys, Powersville, Galt and Newtown have closed in recent years. He says drivers can run out of gas and that it’s a safety issue.

“This area includes (the) western part of Putnam County, eastern part of Mercer County and most of western Sullivan County.” says Busick.