You are here: Home / Archives for Point Lookout

Legislation that would allow a private college in southwest Missouri to employ police officers on-campus will go before a House committee Monday in Jefferson City. 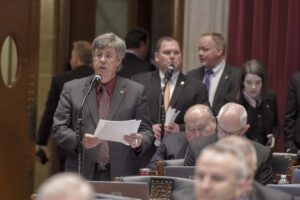 The bill from State Rep. Jeff Justus, R-Branson, will be heard Monday at noon by the House Crime Prevention and Public Safety Committee.

It’s called the “Private College Campus Protection Act.” Last year’s bill would have allowed any of Missouri’s private college or universities to employ police officers on-campus, but the bill stalled.

Justus has rewritten the language so that the new bill only applies to College of the Ozarks, which is located in Point Lookout.

“I don’t want to be the person that calls a parent in the loss of a student, and this is a way that we can put another level of protection by being our own first responders,” McDonald testified in 2019.

Bill supporters say it would ensure campus safety and would require a professionalism for College of the Ozarks campus security. Under the bill, officers would have to take an oath of office and finish police training to obtain a peace officer license.

These provisions only apply to College of the Ozarks.