You are here: Home / Archives for Pearl Harbor

The presiding commissioner in mid-Missouri’s Cole County is searching for living crew members of the battleship USS Missouri, who were on the ship during the Japanese surrender in Tokyo Bay in September 1945. 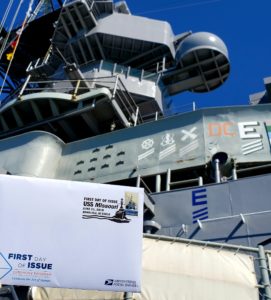 This is a first day of issuance (FDOI) cancellation envelope being held on the deck of the USS Missouri in Hawaii on June 11, 2019 (photo courtesy of the U.S. Postal Service)

“If we can find them, we would like to take them to Pearl Harbor as our guests,” Bushman says. “Everything would be (covered), airfare, hotel and everything.”

Mr. Bushman is involved with the USS Missouri Memorial Association, which is helping to organize the event.

He’s asking anyone who knows of living veterans who were on the ship for the surrender to contact him at the Cole County Courthouse. His phone number is (573) 634-9113.

“There were thousands of sailors present in Tokyo Bay on September 2 (1945). They weren’t necessarily on the battleship Missouri,” says Bushman.

General Douglas MacArthur was on the battleship Missouri during the September 1945 surrender. At the ceremony’s conclusion, General MacArthur delivered a radio address to the American people.

“Today the guns are silent. A great tragedy has ended. A great victory has been won. The skies no longer rain death — the seas only commerce men everywhere walk upright in the sunlight. The entire world is quietly at peace. The holy mission has been completed,” MacArthur’s speech began.

Commissioner Bushman is praising the U.S. Postal Service’s new stamp, which commemorates the 75th anniversary of the battleship Missouri’s commissioning.

Mr. Bushman helped organize last week’s Statehouse ceremony in Jefferson City to unveil the stamp. He watched as veterans wiped tears away, during the ceremony.

“I mean this is our ship, you know it’s the battleship Missouri, it’s part of our state,” Bushman says.

There were two ceremonies on Tuesday to celebrate the 75th anniversary of the commissioning and the new stamp: one in Jefferson City and the other at Pearl Harbor.

Click here to listen to the full interview between Missourinet’s Brian Hauswirth and Cole County Presiding Commissioner Sam Bushman, which was recorded on June 11, 2019 at the Statehouse in Jefferson City:

The U.S. Postal Service (USPS) is honoring the battleship USS Missouri with a forever stamp, in honor of the 75th anniversary of her commissioning. 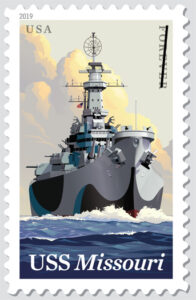 This is the U.S. Postal Service’s commemorative stamp in honor of the 75th anniversary of the commissioning of the USS Missouri (photo courtesy of USPS in Washington D.C.)

There were two ceremonies on Tuesday to celebrate the 75th anniversary: one at Pearl Harbor in Hawaii and the other at the Missouri Capitol in Jefferson City, where Secretary of State Jay Ashcroft presented a proclamation.

“The USS Missouri I think exemplifies everything when we think about our young men and women that fight to protect the liberty and freedom not only of our country and other countries, the Battleship Missouri, the Mighty Mo, that exemplifies it,” Ashcroft tells Missourinet.

The Missouri was the scene of the formal Japanese surrender in World War II in September 1945, with General Douglas MacArthur on the battleship.

A group of veterans and mid-Missouri community leaders organized Tuesday’s ceremony at the Statehouse, to raise awareness about the new stamp. Secretary Ashcroft spoke at the event, and praises the United States Navy.

“In all the wars that this great country has fought for freedom and liberation of other individuals, they’ve done it with the support and on the backs of the Navy,” Ashcroft tells the audience. “Because when you want to move materials to far parts of the world, it’s the Navy that does it.”

You’re now able to purchase the stamps at the post office. Retired Navy Captain David Durbin also spoke at the Jefferson City ceremony, where he noted that USPS was also holding a ceremony near Honolulu.

“Where about the same time, there’s a ceremony going on in Pearl Harbor Hawaii, where the official first day of the stamp is being conducted,” Captain Durbin says.

Secretary Ashcroft read a proclamation from Missouri Governor Mike Parson during the Capitol ceremony, as some veterans wiped tears away while listening.

One of the veterans who attended the Jefferson City ceremony was Charlie Guthrie, who lives in west-central Missouri’s Saline County. Mr. Guthrie, who served on the battleship Missouri, attended the ceremony with former State Rep. Joe Aull, D-Marshall.

Mr. Bushman tells Missourinet that U.S. Sens. Roy Blunt and Josh Hawley are both expected to attend the Pearl Harbor event next September.

The Missouri was the last U.S. battleship to be commissioned. It was the scene of the formal 1945 Japanese surrender and later served in 1991’s Operation Desert Storm, launching Tomahawk cruise missiles at Iraqi targets in occupied Kuwait.

It was built by shipyard workers at Brooklyn’s New York Navy Yard.

Click here to listen to Brian Hauswirth’s interview with Missouri Secretary of State Jay Ashcroft, which was recorded at the Statehouse in Jefferson City on June 11, 2019:

Family members of Second Lieutenant George Whiteman have been visiting two symbolic sculptures in west-central Missouri’s Sedalia. The artwork is inspired by Airman Whiteman’s ultimate sacrifice and the community’s strong relationship with the military. The 22-year-old Sedalia native was the first airborne pilot killed in Japan’s December 7, 1941 surprise attack on the U.S. naval base of Pearl Harbor. 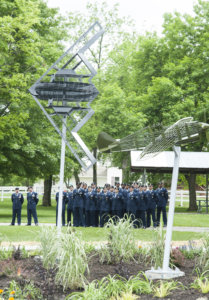 “He just went. ‘I’m going. I’m getting that plane out of here.’ He died doing what he loved to do,” says Kent.

One sculpture represents a P-40 Warhawk plane flown by Whiteman and points toward his childhood home in Sedalia. Another that sits next to it is of a B-2 stealth bomber. Whiteman Air Force Base in the neighboring community of Knob Noster is the home of the B-2 stealth bomber. Together, the sculptures are called “Whiteman: Legacy of Freedom.”

They were constructed by Sedalia artist Don Luper and stand in Katy Park at 24th Street and Park Avenue.

Kent says Sedalia has embraced Whiteman’s service to his country, including an annual service honoring all U.S. soldiers. Other community efforts memorializing Whiteman include the naming of Whiteman Air Force Base after him, a plaque that sits at his childhood home, a “Shadow” sculpture on the State Fair Community College campus and Whiteman’s gravesite in Sedalia’s Memorial Park Cemetery.