You are here: Home / Archives for Paul Curtman

The House has approved a plan its sponsor says would give Missourians a more efficient way to back purchases with gold and silver, and hedge against inflation in the process. 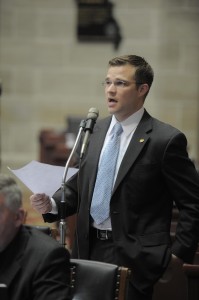 Representative Paul Curtman (R-Pacific) says his proposal is based on a new kind of business that has developed in Utah, that he describes as a sort of “clearing house” for gold and silver.

“The way they do it … it allows you to liquidate it and spend it in real-time. We’re not monetizing gold and silver in the sense that you’re going to walk into stores and use gold and silver, but if you have gold and silver and you put it in a depository, for lack of a better word, they might in exchange give you a debit card. So, you can go out and use your debit card and as you spend it the depository will sell off your gold and silver for you to cover the cost of the transaction.”

Curtman says the plan only deals with U.S. minted gold and silver coins. He says Missourians can already back purchases with those precious metals, but his bill would simplify the process. “Right now you have to go through the process of going to a coin shop or going to a pawn shop, selling it all off and then going out and spending it. Doing it this way makes it much more convenient.”

He says it will help fight against inflation in the process.  “Beef, cotton, sugar … all this stuff has gone up twenty, thirty, forty, fifty percent over the last five years. None of the people in my district, to my knowledge at least, have been getting twenty, thirty, forty, fifty percent raises … Inflation always catches up with the consumer last, so we’re the ones that suffer the most from it. This bill will give people an opportunity … it’ll just protect the value of their labor and their money.”

The provisions of the bill won’t be utilized unless and until a business like the one in Utah is developed in Missouri. Curtman says, “Right now it’s a new concept and so there’s not really regulatory authority over it, so that’s one of the parts of the bill … if this happens, the Secretary of State’s Office would be the one to handle it, because it’s commodities exchange.”

House Democrats questioned the need for the legislation. Representative Mary Still (D-Columbia) says the legislature’s time would be better spent on more pressing issues. “To me, this is the height of nuttiness. This is the goofiest of the goofiest bills we have heard.”

Minority Floor Leader Mike Talboy (D-Kansas City) says the proposal would put Missouri back on the gold standard and stands no chance of passing in the Senate or being constitutional.

Curtman says he sees the challenge of getting support for the bill in the Senate as one of getting people to understand it. “It just helps facilitate the convenience of selling off your gold and silver almost (in) real-time in order to cover the cost of a commerce transaction, I think people will begin to understand.”

He says he was surprised at the resistance his proposal met. “I thought it was going to be an easy bill to get through.”

The legislation was defeated in its initial third reading vote early Thursday afternoon after many lawmakers left the chamber to attend a media conference with Governor Jay Nixon regarding the development of new nuclear power reactors in Missouri.

When the body returned from a recess later in the afternoon, Representative Tim Meadows (D-Imperial) made a motion to reconsider the legislation, which could only have been made by a lawmaker that voted against it. He did so at the request of Majority Floor Leader Tim Jones, who said the bill would have passed if all the members of his caucus had been present.

The motion was carried, and the bill did pass on the second vote, 95-37.

Talboy said of Meadows’ decision, “Representative Meadows has been here longer than I have. He is a very thoughtful, thorough individual and he had discussions on what he thought was the right thing to do and I will stand behind my caucus member on that especially one with the integrity that Tim has.”

The proposal must still go through the Senate in the last four weeks of the session and be signed by the Governor to become law.