You are here: Home / Archives for patriot 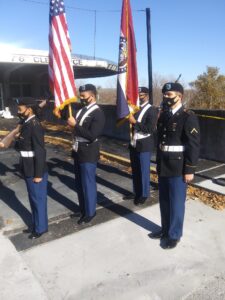 “This is a place here on the beautiful Capitol grounds where thousands of people are going to be convening. So this very spot right here is going to have a lot of visibility,” Tergin says.

The monument is being built next to the Missouri Veterans Memorial and next to the Bicentennial bridge entrance. It will have four panels with themes of homeland, family, patriot and sacrifice.

“It’s a solemn area,” says Tergin. “It’s a place where many students come so they can learn the stories, learn what this is about and why this is so important that we always remember our Gold Star families.”

Fundraising efforts are continuing for the monument.

Gold Star families, veterans, state lawmakers and Jefferson City business leaders are leading the fundraising effort, and they’ve already raised about $30,000. It will cost $75,000 for the monument and granite benches.

The benches are being designed to give visitors an opportunity to reflect on the meanings of the four panels.

Click here to listen to Brian Hauswirth’s interview with Jefferson City Mayor Carrie Tergin, which was recorded on Veterans Day 2020 on the Missouri Capitol grounds: