You are here: Home / Archives for Parkville

The controversial issue of slot machines could end up going to the Missouri Supreme Court in Jefferson City.

That’s a class E felony. Judge Fincham has scheduled a November 23 sentencing hearing in Platte City. The “News-Press” reports Integrity Vending could face a fine of $10,000.

Platte County Prosecutor Eric Zahnd prosecuted the case. He says despite the fact that the slot machines are seen in many Missouri convenience stores and gas stations, they are illegal slot machines, from his perspective.

Zahnd, who was first elected in 2002, has the longest tenure of any elected prosecutor currently serving the Kansas City metro.

The slot machine issue was the subject of at least three hearings in late 2019 by the Missouri House Special Interim Committee on Gaming, which was chaired by State Rep. Dan Shaul, R-Imperial.

During an October 2019 hearing, Chairman Shaul predicted that whichever sides loses the Platte County case would appeal to the Missouri Supreme Court.

The Missouri State Highway Patrol testified at that hearing, saying the number of complaints about illegal gambling in Missouri quadrupled in 2019. Most of those complaints were about alleged illegal slot machines.

The Missouri Gaming Commission testified in 2019 that any illegal gaming machines used in Missouri negatively impact casinos and the state Lottery, reducing taxes and funding for education and veterans.

Legislation that’s aimed at providing witness protection will be signed into law Monday afternoon by Missouri’s governor in Kansas City and Carthage. 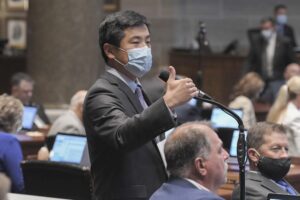 “And what law enforcement has told us is the number one thing they need to prosecute criminals is witnesses that are willing to come forward and testify as to what they saw, so that they can put these criminals behind bars,” Patterson says.

The bill, which is House Bill 66, will create a pretrial witness protection services fund, which will provide security to witnesses, potential witnesses and their immediate families in criminal proceedings or investigations.

“They can use those dollars to find housing for witnesses. Do all the necessary things that you need to get witnesses out of the harmful environment that they’re in,” says Patterson.

The Missouri Senate approved Patterson’s bill 29-0, and it passed the House on a 147-3 vote.

“You know we have a lot of violent crime in Kansas City unfortunately like St. Louis and I think it will be important to help fight violent crime,” Patterson says.

The Attorney General’s Office says it expects the Missouri Housing Development Commission staff to have a proposed solution next week for the domestic violence shelters it turned down for a grant last month.

A shelter for homeless veterans in Columbia revealed on Thursday it had also been denied for that grant.

At least 15 domestic violence shelters were told their applications for the Emergency Solutions Grant (ESG) had been rejected but were not told why. Missourinet has been told that the Commission has not voted on the final decisions on how the grants will be awarded this cycle.

The members of the commission include Governor Jay Nixon, Lieutenant Governor Peter Kinder, State Treasurer Clint Zweifel and Attorney General Chris Koster. When Missourinet reached out to their offices about the situation, Koster Press Secretary Nanci Gonder issued this statement:

“Funding is critical for our state’s domestic violence shelters. After learning of the cuts in emergency shelter grants, we discussed the issue with MHDC staff and expect they will present a proposal at next week’s meeting.”

The Commission will meet at the Stoney Creek Inn in Columbia Friday, March 14 at 9:00.

After learning about those domestic violence shelters, a shelter for homeless veterans in Columbia reached out to Missourinet to say it had also lost the ESG.

Executive Director of Welcome Home, Inc, Aneisa Sherrill-Mattox, says Welcome Home Inc. has been approved for about $18,000 each of the 8 years she has worked there. Last year the shelter was approved for $50,000.

Like the domestic violence shelters, she has not been told why Welcome Home’s ESG application was turned down and instead was told the shelter is on a list to receive its evaluations.

Sherrill-Mattox says the shelter has already cut two caseworker positions and is cutting programs. She says much of what Welcome Home used that grant for was to provide emergency motel stays for homeless female veterans and veterans with small children.

“Female veterans are one of the fastest-growing parts of the homeless population and there are virtually no services available to them,” says Sherrill-Mattox. “Our shelter, by virtue of how small we are, we couldn’t provide safe housing for them in the shelter so we had relied on the ESG for them to be placed into a motel until a more permanent housing solution could be identified.”

The Nixon Administration has also told Representative Chris Kelly (D-Columbia) and other legislators it is looking for a funding source for those shelters, perhaps using money from the Temporary Assistance for Needy Families (TANF) program.

The Office of Administration told Missourinet Wednesday the Administration’s office of Budget & Planning and the Department of Social Services are looking at multiple possible solutions, but have not nailed down any mechanics.

Workers at 15 domestic violence shelters are anxiously awaiting word on whether funding will be available for those shelters after learning that they had been turned down for a grant.

The Emergency Solutions Grant (ESG) is in its second year of being administered by the Missouri Housing Development Commission. The Commission’s staff rejected the applications of those 15 shelters, most of them in rural parts of the state, and has not yet released explanations of the rejections. The Commission has not yet voted on the awarding of those grants.

The shelters whose applications had been rejected are in Cape Girardeau, Clinton, Harrisonville, Lebanon, Moberly, Bolivar, Doniphan, Sedalia, Sikeston, Lexington, Nevada, Parkville, Portageville and one each in St. Louis and Kansas City.   A shelter in Springfield had an application for shelter funds rejected, but was approved for other ESG grant money.

When the administration of Governor Jay Nixon (D) was informed of the situation by state lawmakers whose districts included those shelters, it began looking for ways to make sure they would be funded. The Office of Administration says several options are being considered but a mechanism hasn’t been decided on.

That’s encouraging news to Kelly Pedigo, Co-Director at Safe Passage in Moberly, but it’s still a long way from a solution.

“This is far from over,” she tells Missourinet.

“Locating replacement funding is a have-to thing. There’s nowhere else in (our) budget to cut,” says Pedigo.

Safe Passage applied for more than $28,000 dollars, but like most shelters, didn’t anticipate receiving the full amount. Getting cut completely was a shock.

“When your entire annual budget is around $250,000 and you just took out $20,000 of your essential expenses, that hits pretty hard,” says Pedigo.

She says the loss of that funding at Safe Passage would cause employees to be laid off, but it could also result in the loss of matching federal funds.

“Once you start having to lay people off because you can’t afford the general revenue portion of their salary,” Pedigo says, “then you have to start turning down government funding as well, so it’s a really slippery slope.”

See our earlier story on these shelters’ loss of the ESG

Ann Gosnell with House of Hope, Inc. in Lexington says local fundraising efforts are an option, but can only go so far in rural areas.

“It becomes burdensome on our community, which is very supportive of House of Hope,” says Gosnell. “We have a lot of supporters, but … going to the same people over and over again to ask them for money to help run our program can sometimes put a barrier up between us and our community, and we absolutely don’t want that.”

She says it also puts the shelters at a disadvantage to not yet know why they lost the grant.

Both Gosnell and Pedigo hope members of their communities will work to raise attention about the issue.

“Please go to your legislators and ask them what their plan is,” says Gosnell. “Ask what’s going on and ask what the solution is.”