You are here: Home / Archives for override

A Missouri lead producer says one of the Governor’s vetoes could spell the end of its operations in the state.

The Vice President of Law for the Doe Run Company, Matt Wohl, has been visiting with state lawmakers urging them to overturn the veto of a bill that would cap punitive damages for the company in contamination lawsuits at $2.5 million.

“It doesn’t affect the compensatory damages,” Wohl said. “It only affects punitive damages nor does it affect any of our current operations. It only affects the legacy mining sites.”

Wohl says a series of such lawsuits have been filed against the company, the first of which will come to trial in October.

“That’s why we chose this session to try to get this bill passed. For us it is absolutely critical that we get this done this year … I don’t know that we’ll take another crack at it. It may be too late.”

Wohl disagrees with the Governor’s assessment that the bill is unconstitutional and only favors one company, and says the legislation would actually encourage other companies to undertake remediation.

“It’s not just in St. Francois County but down in the tri-state area which is where Oklahoma, Kansas and Missouri meet. That was an old mining district as well and the government is spending millions of dollars doing remediation down there, in cooperation with some companies but I contend there are probably others that would step up and do it but they’ve seen the example of what happens at Doe Run. When they’ve stood up and done the work they face litigation.”

The veto session is September 11.

For the second straight year, Governor Jay Nixon has vetoed a bill to address the charging of taxes on vehicles purchased out-of-state.

Nixon says Senate Bill 182 doesn’t give voters the opportunity to address all the changes that would make in local and state taxes they have to pay. The bill’s sponsor, Senator Mike Kehoe (R-Jefferson City) says he’s disappointed with the Nixon Administration’s assessment.

“We presented them with many versions of this bill that just didn’t come out earlier. I’m not an attorney but other folks who have looked at this feel like their concerns are addressed in other areas of the bill, so it certainly wasn’t an intentional thing.”

Though Kehoe’s Republican party has a supermajority in both the House and the Senate, he says a veto overturn will not be attempted.

“I’m going to do what I think is best for Missouri small businesses and municipalities, and I think that’s not let this get caught up in politics, which, sometimes a veto override can get very political. The Governor’s office has promised they would give us some suggested language to ease their concerns by Monday. I’m going to incorporate those changes and then find a bill that’s moving … a vehicle, if you will … that’s moving somewhere where those changes will fit on and try to get it [passed this session].”

He thinks it’s important the issue be resolved this year.

“Every day that goes by, we’re losing sales to competing states. Municipalities are losing tax revenues, and the more that sales start to go to other states, the jobs will follow, and so it’s very important.”

Kehoe thinks there is enough support to get the legislation through again. SB 182 passed the Senate unanimously and passed out of the House 123-32.

As the beginning of the annual veto session nears, there is growing doubt that the veto on a bill dealing with sales taxes on certain vehicle purchases will be overturned. 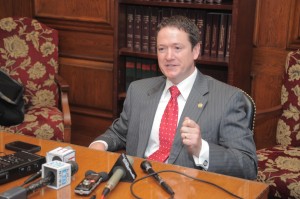 The bill would allow the collection of sales taxes on purchases made from private Missourians or made out-of-state. It passed the House with 122 “yes” votes in May, including 44 from Democrats.

Jones says there is some “great concern” in his caucus about the bill, much of it stemming from the issue raised by the Governor of a tax being raised retroactively. “It’s not something our party is wont to stand upon. I think we have to be realistic about the problem before us and also be cognizant of the fact that even if we were able to override this bill, we may have done nothing other than kick the can down the road because this bill could very easily, I believe, be challenged in court again. It has a constitutional problem.”

Jones says if he can’t find the votes in his caucus for an override, he wants to see Governor Jay Nixon call a special session to address the issue. “I’ll say it right now and I’ll reiterate this after the veto session today. I’ll challenge the Governor to lead for once as the chief executive of this state, call us back into special session, and he can either come up with a proposal to fix this problem or we can engage our experts in this area. I think there’s a number of solutions that would work.

Jones says he believes his caucus is “completely united” in favor of overturning the Governor’s veto of SB 749, a bill that would allow employers and individuals to opt out of insurance coverage for abortion, sterilization and contraception.

The veto session begins at noon.