You are here: Home / Archives for Operation Triple Beam 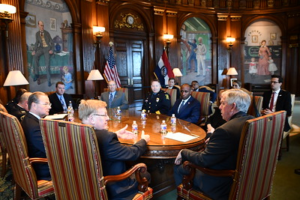 The governor and mayors briefed the Capitol Press Corps after the meeting, inside the governor’s office.

Springfield Mayor McClure says their top three priorities are witness protection and relocation, mental health treatment and keeping guns out of the hands of those under 18. Krewson says protecting witnesses is key to solving more crimes and obtaining more convictions.

Governor Parson also says the Missouri State Highway Patrol’s “surge” on St. Louis interstates is taking criminals and guns off the streets. In response to a question from Missourinet, the governor says the Patrol has made about 300 arrests since the operation began a month ago.

“So the important thing to take out of that (300 arrests), we are getting people off the streets,” Parson says. “And that’s just counting what we (state troopers) did, that’s still not counting what the cities are doing everyday up there. But all of that helps.”

The arrests announced by the governor also don’t include this month’s massive federal special operation called “Operation Triple Beam”, where 69 alleged St. Louis-area gang members were arrested. 16 of those arrests were for murder-related warrants.

Mayor Krewson tells Missourinet she “begged” the governor to send troopers to St. Louis, and praises his response.

“I drive on Highway 70 regularly and I always see one, two maybe three Highway Patrol officers out there, trying to make a difference on our highways,” says Krewson.

She says the operation has been successful, adding that some of the 300 arrests during the surge involve guns and drugs.

The governor also discussed the importance of education and workforce development during the meeting, along with battling poverty.

Schmitt told reporters last week that there have been 305 carjacking incidents in the St. Louis metro area this year. Schmitt notes there is currently no uniform charge for carjacking, adding that the new statute would bring clarity to charging and sentencing carjackings.

ST. LOUIS- Nearly 200 fugitives wanted for violent offenses are off the streets of the St. Louis area tonight, as a result of a massive federal special operation. 16 of the arrests are on murder-related warrants. 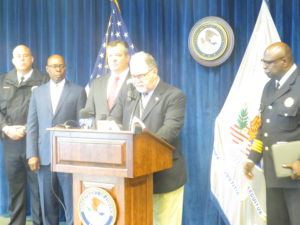 During a Thursday morning press conference at the Thomas Eagleton Courthouse in downtown St. Louis, federal prosecutors announced that 162 fugitives have been arrested in the St. Louis region as part of “Operation Triple Beam.” State and local law enforcement officers joined U.S. Attorney Jeff Jensen at the press conference.

“This joint operation had the added effect of strengthening the relationship among our local, state and federal law enforcement counterparts,” U.S. Marshal of Missouri’s Eastern District John Jordan tells reporters. “The U.S. Marshals provided multiple resources to include manpower, funds and essential equipment to assist local, state and federal partners in this operation.”

Jordan emphasizes that 16 of the St. Louis-area arrests were connected to homicides. 69 suspected gang members have been arrested. Jordan also says 40 firearms and three vehicles have been seized, and nearly ten pounds of illegal drugs have been confiscated.