You are here: Home / Archives for Olivette

A Missouri House committee decided Friday that remote testimony via zoom will be up to individual committee chairmen and chairwomen this session. 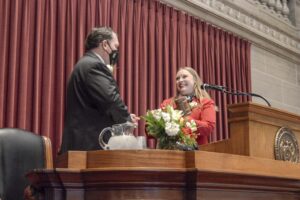 The Missouri House Consent and House Procedures Committee held about a 90-minute hearing on Friday in Jefferson City, discussing zoom testimony and numerous other rules issues.

Committee members in both parties agree that COVID continues to be a concern, but the GOP-led committee is giving discretion to Missouri House committee chairs. State Rep. Sara Walsh, R-Ashland, chairs the committee.

Remote testimony happened in mid-December, when former New York Mayor Rudy Giuliani testified via zoom before the Missouri House Special Committee on Government Oversight. There were some technical issues with Giuliani’s computer that night, and at one point, he was upside down in the screen that Missouri lawmakers were facing.

As for the Consent and House Procedures Committee, they also voted down a proposed amendment Friday from ranking Democratic State Rep. Tracy McCreery, D-Olivette. She says House committees should not hold a hearing on bills and vote the same day, saying lawmakers need more time to study any bill.

House Majority Floor Leader Dean Plocher, R-Des Peres, testified before the committee on Friday. The committee approved one of his proposals, which would allow Missouri House committees to meet without a quorum. That can be an issue when there is snow and/or ice in Jefferson City.

The committee also discussed the importance of subpoena enforcement for Missouri House committees.

Missouri’s governor granted pardons on Monday to 24 people he says have demonstrated a changed lifestyle and desire to move on from past behaviors. 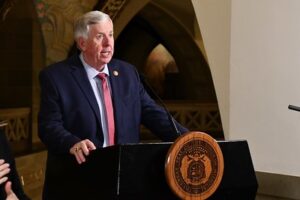 They are the first pardons granted by Governor Mike Parson (R), who took office in June 2018. The governor’s office isn’t releasing the names of the 24, until families have been notified.

“If we are to be a society that believes in forgiveness and second chances, then it is the next chapter in these individuals lives that will matter most,” Governor Parson says, in a written statement. “We are encouraged and hopeful that those individuals will take full advantage of this opportunity.”

The governor also says his legal team continues to review clemency files, and will keep working to reduce the backlog he inherited. There are currently 3,695 pending clemency applications.

Governor Parson has also announced that he’s commuting three prior drug offenders to house arrest. After their home plan is approved by Missouri’s Probation and Parole Board, those three inmates will serve the rest of their terms under house arrest.

The governor’s office will release more information about the 24 pardons at a later date.

State Reps. Shamed Dogan, R-Ballwin, and Tracy McCreery, D-Olivette, have called on the governor to grant clemency for 70-year-old Patty Prewitt, who’s been incarcerated for 34 years.

Prewitt is serving a life prison term for first degree murder, for the 1984 death of her husband in western Missouri’s Holden. She has maintained her innocence since that time, saying an intruder killed her husband and attacked her. 56 Missouri lawmakers in both parties signed the Dogan-McCreery letter that says Prewitt’s continued incarceration is not in the state’s interest.

“I remain hopeful that Patty Prewitt is on this (24 pardon) list,” McCreery tweeted at Missourinet Monday evening.

Prewitt is incarcerated at the state prison in northwest Missouri’s Chillicothe. Unless the governor grants clemency, Prewitt won’t be eligible for parole until 2036. She would be 86.

Legislation aimed at modernizing the state’s current HIV laws has been filed by a bipartisan group of Missouri lawmakers, who say the current laws are based on information that is no longer scientifically accurate. 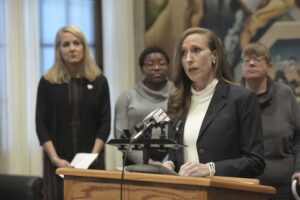 “Let’s work on these things (HIV and her prescription drug monitoring program legislation) and get them done to actually truly affect people’s daily lives at home,” Rehder says.

Supporters of the Rehder legislation want to see the laws change, so there is no longer an incentive to not get tested for HIV. They say current law treats HIV as a crime.

State Rep. Tracy McCreery, D-Olivette, joined Rehder at a December press conference at the Statehouse in Jefferson City. McCreery has filed her own version of the bill, which is similar to the Rehder bill. Representative McCreery tells Missourinet that modernizing the laws is critical.

“It’s a matter of life and death and it’s one of those issues that affects both rural and urban, suburban Missouri,” says McCreery. “And that’s why we’re working together.”

The Rehder and McCreery bills would both eliminate HIV-specific language in state law.

A coalition of groups ranging from Empower Missouri to the Missouri HIV Justice Coalition to the AIDS Project of the Ozarks is supporting the legislation. Spectrum Healthcare Executive Director Cale Mitchell tells Capitol reporters the state’s current laws are medically inaccurate.

“Diagnosis of a chronic illness should not be punitive and that’s what we have seen historically with the HIV laws that are in place,” Mitchell says.

Missouri’s current law has felony-level penalties if an HIV-positive person cannot prove that they disclosed their HIV status before engaging in sexual activity.

As for Rehder, she notes President Donald Trump (R) has aimed to cut HIV cases by 90 percent within ten years.

Empower Missouri says of the top 220 counties in the United States that are at risk of rapid dissemination of HIV infection among those who inject drugs, 13 counties are in Missouri.

All 13 of those Missouri counties are south of Interstate 70. They are Bates, Cedar, Crawford, Hickory, Iron, Madison, Ozark, Reynolds, Ripley, St. Francois, Washington, Wayne and Wright.