Northwest Missouri State University Director of Athletics, Mel Tjeerdsma, has been selected for induction into the College Football Hall of Fame by The National Football Foundation (NFF). Tjeerdsma is one of three coaches, along with 10 former players, in the 2018 class. The announcement was made Monday morning.

“Being part of the 2018 class of the NFF College Football Hall of Fame is almost beyond my imagination,” said Tjeerdsma. “This honor is really made possible through the cumulative efforts of so many coaches and student athletes that have been a part of my career as well as the love and support of my family. I’m looking forward to this year and all of the events that go along with the award.”

Tjeerdsma started coaching football at Northwest in 1994 and led the team to 183 victories in 17 seasons. After retiring from coaching in 2010, he returned in April of 2013 as the Bearcats’ Director of Athletics.

Tjeerdsma’s teams featured seven academic All-Americans in his last seven years as coach and he had two Ken B. Jones Award winners in his last five years, recognizing the top male student-athlete in the MIAA, as well as one National Scholar-Athlete of the Year. In 2011, Tjeerdsma coached Team USA to a world championship at the International Federation of American Football World Cup in Austria.

After a 15-minute lightning delay to the opening kickoff, followed by a rain-drenched first half, seven turnovers, and two blocked punts, the No. 9-ranked Ashland University football team did just enough to hold off the 13th ranked and two-time defending D-II national champion Northwest Missouri State Bears with a 21-18 final in Ashland, Ohio.

The Bearcats (9-3) came into Saturday’s game with the top-ranked defense in the country, but it was Ashland who held Northwest in check for most of the second half, holding the Bearcats to 2.2 yards per play in the victory.

Ashland scored first on a 13-yard touchdown pass from senior quarterback Travis Tarnowski to redshirt freshman tight end Michael Schweitzer. Northwest Missouri State, however, took short fields following an interception and a fumble to take a 10-7 lead early in the second quarter.  Jonathan Baker scored on a three-yard run, capping a short four-play, 23 yard drive.  The Eagles regained the lead at 14-10 when Tarnowski found senior wide receiver Jamie Hence in the end zone for a 21-yard score at the 4:25 mark of the second.

To start the third quarter the Eagles, after nearly losing the ball on a punt return, went 94 yards on six plays scoring on a 29-yard touchdown pass.

Northwest Missouri State added a touchdown pass and a two-point conversion with 7:42 to play, on a Zach Martin to Jordan Grove 35-yard TD but Ashland’s defense sealed the deal when junior safety Isaiah Stiverson broke up a fourth-down pass with the Bearcats at the AU 38-yard line. 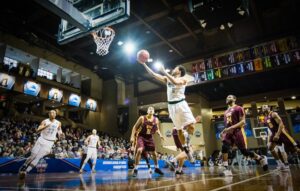 Northwest Missouri men’s basketball advanced to the national semifinal with a 79-70 win over St. Thomas Aquinas in the Elite Eight.  The Bearcats shot .500 from the field and .460 from beyond the arc to earn a slot among the final four teams.

For the Bearcats Justin Pitts led the way scoring 26 points and dishing out three assists while Zach Schneider finished with 16 points. Chris-Ebou Ndow had a double-double with 13 points and 11 rebounds while Brett Dougherty added 14 points.

“They sped us up throughout,” Northwest coach Ben McCollum said. “I thought offensively, we didn’t click for quite a while. We got off to a good start and took care of the ball. As the game progressed, they wore us down and we missed shots that I thought could have broken them a little bit.”

The Bearcats will face Lincoln Memorial on Thursday for an 8:30 p.m. tip-off from the Sanford Pentagon in Sioux Falls, S.D.

Top seeded and number one ranked Northwest Missouri State pulled out a 55-52 win in a low scoring game over second seed Southwest Minnesota State to earn a spot in the NCAA Division II Elite Eight.  Northwest lost in the Central Region championship game the last three seasons.  The Bearcats, 32-1, is making its first trip to the Elite Eight since 2004 and third in school history.

The Bearcats won the battle at the line shooting .750 from the charity strip while allowing the SWMSU just one make in four attempts.

For the Bearcats Justin Pitts led the way scoring 25 points while dishing out a game high five assists.

“This means a lot because after last year’s loss, a lot of us stayed most of the summer and worked hard,” Pitts told Bearcatsports.com. “We worked hard all preseason. This feels good. We have been so close the last three years. It feels special to finally get to the Elite Eight.”

The Bearcats advance to the Elite Eight which will be played at the Sanford Pentagon on March 22-23, 25 in Sioux Falls, S.D. NWMSU will await the reseeding on the final eight teams to learn their opponent and game time for the March 22 game.

The Northwest Missouri State University men’s basketball team defeated Missouri Western, 74-58, on Saturday afternoon at the MWSU Fieldhouse in St. Joseph, Mo.  The win moves the No. 1 ranked Bearcats to 19-0 on the year and 11-0 in MIAA play. The Griffons fall to 7-13 overall and 3-8 in conference action.

Junior Justin Pitts recorded his second career double-double, scoring 13 points with 11 assists. He also added three rebounds, a steal and a blocked shot in the win.  Senior Zach Schneider hit 7-of-11 from long range to finish with a game-high 23 points. He had three rebounds and was 2-of-2 from the charity stripe. 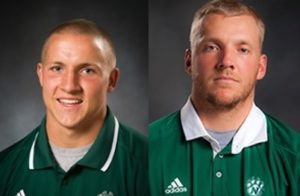 Two Northwest Missouri State football were injured Tuesday evening on I-29 in Andrew County after the vehicle they were driving hit a slick spot and went off the road.  22-year old Cole Forney, a senior from Maryville, Mo. and 22-year old Jacob Vollstedt , a senior from Iowa City, Ia. were involved in the wreck.

According to the Missouri State Highway Patrol’s report, Forney was driving a 2006 pickup truck heading south on I-29 just north of St. Joseph.  His truck hit a slick spot and slid off the road and struck a concrete barrier, ejecting Forney before finally coming to a stop back on the southbound lanes before it burst into flames. Vollstedt was able to escape.

Both Forney and Vollstedt were originally taken by ambulance to Mosaic Life Care in St. Joseph. Forney is listed with serious injuries, Vollstedt’s injuries are moderate.  Forney was not wearing his seat belt.

Jake has been released. Cole is at KU med & stabilized. Please keep Cole & his family in your prayers. Will update as we know more. ?? https://t.co/mUu4FLmWZY 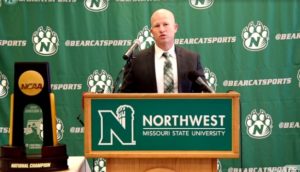 Northwest Missouri State University has named Rich Wright as the 20th head coach of Bearcat football. Wright was officially introduced during a press conference on Monday afternoon at the J.W. Student Union on the Northwest campus. Wright takes over for Adam Dorrel, who was announced Monday morning as the new head coach at Abilene Christian University.

“Number one, Rich Wright is a teacher,” said Director of Athletics Mel Tjeerdsma. “He is always very well organized, he is very passionate, very personable and definitely a motivator. He really has a great football mind more than anything else.”

Wright takes over a program that graduates a senior class that went 55-2 with three national titles in the last four years and six in program history.  Pressure will be on Wright to continue the winning ways of this program.

Wright, a native of Hamilton, N.Y., has been a member of the Bearcat coaching staff since 2004, serving as the program’s defensive coordinator and assistant head coach the past six seasons. Since the 2004 season, Northwest is 163-22 overall and 119-10 in MIAA play. He has helped lead Northwest to eight NCAA title games, capturing four championship trophies.

END_OF_DOCUMENT_TOKEN_TO_BE_REPLACED 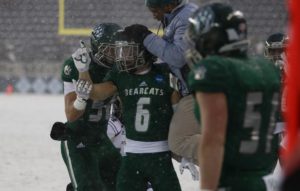 On a snow covered field with sub zero wind temps, the Bearcats relied on their running game to get the job done.

Junior Randy Schmidt rushed for a game-high 96 yards. He completed five passes, one of which went for the first touchdown of the game. He also caught two passes for 25 yards and played on special teams.

END_OF_DOCUMENT_TOKEN_TO_BE_REPLACED 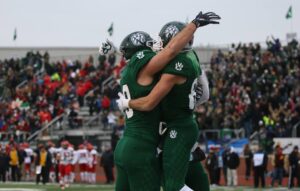 Northwest Missouri overcame three turnovers as they held Ferris State to just 284 yards in a 35-20 win that earned them a trip to their second straight national title game.

The Bearcats struck first at the 5:32 mark in the first quarter as they used a 14-play 92-yard drive to open the scoring with a Randy Schmidt four-yard rush.

“It is hard not to get emotional when you talk about our team tonight and their performance,” Northwest coach Adam Dorrel said. “I thought it was one of the gutsier performances in Bearcat history.

“I’ve been part of a lot of big games here as an assistant coach and head coach and I don’t know if I have seen a team grind out a victory against a better team than we did today. You look at the amount of injuries we had and when they happened.”

Ferris State would answer early in the second quarter as their quarterback Trevor Bermingham took it in from three yards out to knot up the score. The Bulldogs would strike again as they took advantage of a NWMSU turnover and Bermingham called his own number again, this time from four-yards out.

The Bearcats would block the extra point, and on the next drive Jonathan Baker would find Shane Williams for a 19-yard strike making it a 14-13 lead. NWMSU struck again as Cameron Wilcox ran it in from two yards out to make it a 21-13 lead with 3:14 to go in the half.

END_OF_DOCUMENT_TOKEN_TO_BE_REPLACED 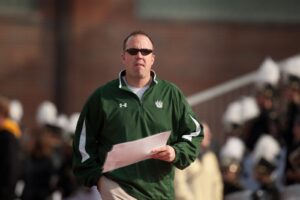 Northwest Missouri State University head football coach Adam Dorrel has been named the AFCA Region 3 Coach of the Year. Dorrel, along with the winners of Division II’s other regions are now eligible for the American Football Coaches Association’s Coach of the Year honors. The winners are selected by Active members of the Association who vote for coaches in their respective regions and divisions.

Dorrel has earned AFCA Coach of the Year honors twice, leading Northwest to national titles in 2013 and 2015. This year, Dorrel and the Bearcats captured their fourth-consecutive MIAA title, going 11-0. In six years at the helm, Dorrel has gone 74-8 with a 57-5 MIAA mark. He has made the NCAA postseason all six years, compiling a 13-3 playoff record.