You are here: Home / Archives for Northern Missouri 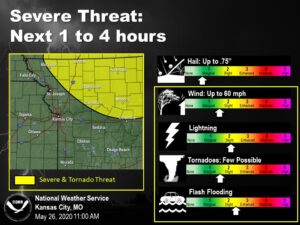 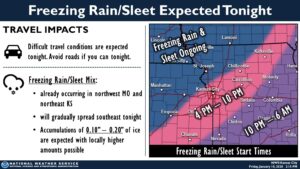 The National Weather Service (NWS) in Pleasant Hill has updated the timing of the winter storm that will impact much of Missouri (January 10, 2020 map courtesy of NWS Twitter)

“What we have ongoing right now is some freezing rain and that is going to cause quite a lot of problems as we continue on in the afternoon hours through those evening hour time frames,” Blair says.

Maryville and Bethany are expected to see five to eight inches of snow.

“And as that colder air arrives after sunset we will start seeing that potential for both freezing rain and then eventually sleet to move into the area,” says Blair.

Four to six inches of snow are expected in Chillicothe and St. Joseph. Cities like Columbia and Moberly could see up to a quarter-of-an-inch of ice. Jefferson City could see some ice as well.

The NWS and the Missouri Department of Transportation (MoDOT) are also warning you to be on the alert for refreezing of roads Saturday night into Sunday morning, across central, northern and western Missouri. Blair urges you to be cautious.

“The key point takeaway is don’t worry so much about the exact amount of snow forecast,” Blair says. “Just remember that this is going to be a combination of both a glaze of ice, followed by snow on top of that.”

Missourinet Cameron affiliate KMRN (AM 1360) reports more than 25 schools in northwest and north-central Missouri are dismissing early today. They include the St. Joseph, Gallatin and Princeton School Districts. Our Moberly affiliate KWIX (AM 1230) reports four districts have dismissed early in their listening area, including the Green City and Milan School Districts.

The NWS says a flash flood watch is in effect for southern and central Missouri, including Columbia and Springfield.

Click here to listen to the full interview between Missourinet’s Brian Hauswirth and National Weather Service (NWS) meteorologist Scott Blair, which was recorded on January 10, 2020: