You are here: Home / Archives for Normandy

Political figures on both sides of the aisle are praising the legacy of longtime Missouri lawmaker Wayne Goode, D-Normandy, who died Saturday at the age of 83. The “St. Louis Post-Dispatch” reports Goode died from leukemia. 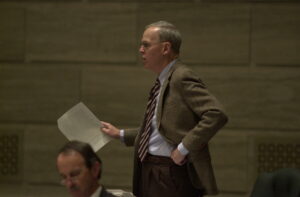 Goode served 12 years in the Senate with former State Sen. Peter Kinder, R-Cape Girardeau, who was President Pro Tem for Goode’s final years in the chamber.

“Wayne Goode was plainly and justifiably recognized by all as one of the real giants in the Missouri Senate, and for that matter, the General Assembly in the second half of the 20th century and into the 21st century,” Kinder says.

“Wayne was a great storer of institutional knowledge and wisdom all to himself. He was a guy people on both sides of the aisle looked to for guidance on a lot of issues,” says Kinder.

Kinder credits Goode and the late State Sen. John Russell, R-Lebanon, for helping Missouri through tough budget years from 2001-2004. Kinder notes Goode and Russell entered the Missouri House together in 1963, and that while they shared different political philosophies, they put the state’s interest first.

Brad Ketcher, who served as Governor Mel Carnahan’s (D) chief of staff, describes Senator Goode as an extraordinary legislator, tweeting Sunday that “Missouri was so much better for his decades of public service.”

Goode also was known for his legislation involving the environment, including the issue of emission testing on vehicles in the St. Louis area. And he expressed concerns several times about speeding and increasing traffic deaths on Missouri highways.

Governor Parson is on a European trip to promote more international trade and investment in Missouri industries. The governor will make several stops along the way, visiting Germany, Switzerland, then to France.

He will attend a memorial ceremony at the World War II D-Day invasion site in Normandy, where he and Missouri First Lady Teresa Parson will visit the Normandy American Cemetery and honor Missouri’s fallen through a flag exchange and wreath-placing ceremony with Superintendent Scott Desjardins.

While in France, Parson will meet with the Canadian and U.S. Ambassadors to France, key executives of the U.S. and Canadian Industry Associations, fellow U.S. Governors, and other national and military officials.

Parson then attends to Le Bourget air show, the world’s largest, to meet with officials from Boeing and other aerospace companies.

Details about the second half of the trip will be released next week. The trip is funded by Missouri’s Hawthorn foundation, an economic development non-profit.