You are here: Home / Archives for Noel

The Missouri Legislature has voted to give final approval to an approximately $35 billion state operating budget, a budget that does not contain funding for Medicaid expansion. 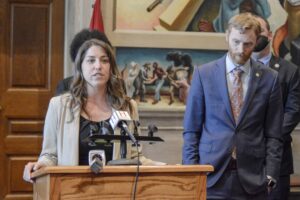 Democratic lawmakers are appealing directly to GOP Governor Mike Parson, urging him to work to implement Medicaid expansion. GOP lawmakers say the money is best spent on the most vulnerable, including those with developmental disabilities.

Medicaid is officially known as MO HealthNet, and it’s a federal and state program that assists with medical costs for residents with limited incomes.

Medicaid expansion supporters say Amendment Two, the August ballot measure that passed, would help the working poor. They note it would expand Medicaid for residents between the ages of 19 and 64 with an income level at or below 133 percent of the federal poverty level.

State Rep. Sarah Unsicker (D-Shrewsbury) was one of several House Democrats who spoke on the House floor on Friday. She tells her House colleagues that 49 percent of low wage workers without insurance are in the industries of hospitality, retail and health care and social assistance.

“Nearly 13 percent of uninsured workers work in health care and social assistance. People who work in the industry of health care can’t get insurance through their employer. Having uninsured health care workers puts the health of their patients at risk,” Unsicker says.

She says there are 21 rural Missouri counties where more than 20 percent of the adult population is uninsured, including in northeast Missouri’s Scotland County. Unsicker says one of three adults there is uninsured.

She says residents in those rural counties would benefit the most from Medicaid expansion. 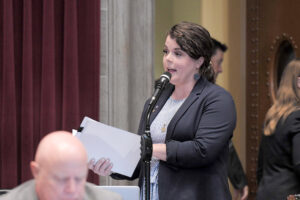 In August, 53 percent of Missouri voters approved Amendment Two, but it failed in 105 of the state’s 114 counties. The opposition to Medicaid expansion comes from rural GOP lawmakers in districts that voted against Medicaid expansion.

One of the counties mentioned by Representative Unsicker is southern Missouri’s Wright County, which is represented by Assistant House Majority Floor Leader Hannah Kelly (R-Mountain Grove). She spoke on the floor Friday, after Unsicker.

“And I would like for the record that Wright County overwhelmingly defeated Medicaid expansion. And my people talk to me every weekend when I come home about how glad they are for the end result of what we’re here to do today,” Kelly says.

“And I take issue and I wonder if you (Representative Kelly) do, with the thought that we don’t know what’s good for own counties and our people. Rural Missouri voted overwhelmingly against Medicaid expansion, but yet we seemingly are too backwards to know what’s good for us,” says Deaton.

House Republicans also note that the number of Missourians on Medicaid has increased from 903,000 in April 2020 to 1,059,000 today, and that the state Department of Social Services’ budget continues to grow.

House Minority Leader Crystal Quade (D-Springfield) is urging the governor to work to implement Medicaid expansion. Leader Quade notes the governor is a former sheriff, saying that he’s built a solid reputation for respecting and upholding the law.

While he opposed the August ballot measure and warned about its cost, Governor Parson called for Medicaid expansion implementation, during his January State of the State Address in Jefferson City.

“Like I have said many times, I will always uphold the will of the voters, and we will move forward with expanding Medicaid coverage to approximately 275,000 Missourians,” he told state lawmakers in January.

While most of the media focus from Friday’s heated debate has been on Medicaid expansion, there were numerous other parts of the budget that received strong, bipartisan support.

The budget provides a $90 million increase for Missouri foster and adoptive children, and also boosts the clothing allowance for foster children and foster teens.

It also includes a two percent pay increase for all of Missouri’s approximately 53,000 state employees. 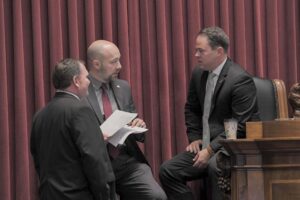 The committee plans a noon hearing in the Missouri House chamber. The funding will provide additional resources to respond to COVID.

Budget Committee Chairman Cody Smith, R-Carthage, is expecting a four to six-hour hearing on Monday. Smith tells Missourinet that state budget director Dan Haug will be the primary person testifying on Monday, adding that state departments with appropriations in the bill will be at the Capitol to answer questions from committee members.

Governor Mike Parson (R) has called the special session, which began on Thursday. The governor notes there is still CARES Act funding that needs to be distributed to Missourians.

Governor Parson has spoken to both House Speaker Elijah Haahr, R-Springfield, and Senate President Pro Tem Dave Schatz, R-Sullivan, about the special session. Parson says he is working with the Legislature to ensure that these funds are distributed across Missouri as quickly as possible.

The governor says since the Legislature approved the $35 billion state operating budget in May, additional CARES Act funding has been made available to the state.

House Speaker Elijah Haahr, R-Springfield, appointed Rep. Deaton, R-Noel, to the post last week, saying Representative Deaton will be ready to assist in the committee’s work to appropriate funding during the special session to combat COVID.

Speaker Haahr says it was important to name a vice chairman ahead of the special session.

A freshman state lawmaker from southwest Missouri’s Noel is the new vice chairman of the powerful Missouri House Budget Committee. 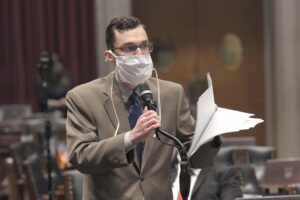 House Speaker Elijah Haahr, R-Springfield, has appointed State Rep. Dirk Deaton, R-Noel, to the post, saying Deaton will be ready to assist in the committee’s work to appropriate funding during the upcoming special session to combat COVID.

Deaton, who is unopposed in Tuesday’s election, was elected to the Missouri House in 2018.

“My top priorities are to support (House Budget Committee) Chairman (Cody) Smith as he guides the committee and work with my fellow committee members as we seek to appropriate taxpayer dollars wisely,” Deaton tells Missourinet.

Governor Mike Parson (R) announced the special session in late October, saying there is still CARES Act funding that needs to be distributed to Missourians. The governor has called a special session on a supplemental budget bill. The amount of that supplemental is unknown, at this time.

The governor says the supplemental will also include funding for a domestic violence grant and child support payments.