You are here: Home / Archives for New Madrid 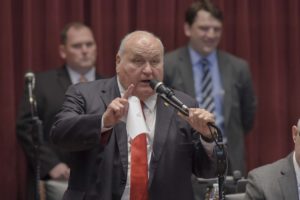 State Rep. Don Rone, R-Portageville, says the flooding and rains have caused about $150,000 in damage to Caruthersville’s sewer system.

“Because the seep water gets into their sewers and it’s created a lot of problems, especially at Caruthersville,” Rone says.

Caruthersville, which is a town of about 6,000 residents, is bordered on the north and the east by the Mississippi River.

In addition to his legislative duties at the Missouri Capitol in Jefferson City, Rone also serves on the St. Francis Levee District in Caruthersville.

Representative Rone says a majority of farmland between the levee in Caruthersville and the Mississippi River has been underwater for more than 100 days. Rone tells Missourinet that rain has been hurting most Bootheel farmers.

Rone says cotton farmers will probably have to replant, adding that farmers behind the levee will be late getting a crop in. He also notes there have been no levee breaks.

Chairman Rone also says there’s been “a little bit of trouble getting rice in”, because of the rain.

“And usually, rice goes on gumbo ground or white clay ground, which historically stays wet longer and we’ve had a little bit of a problem getting the rice crop in,” Rone says.

The Missouri Rice Council notes rice production in the Show-Me State is completely located in southeast Missouri, with Dunklin, Pemiscot and Butler counties having the largest acreages.

Rone also says potatoes are in and peanuts are going in.

Click here to listen to Brian Hauswirth’s full five-minute interview with State Rep. Don Rone, R-Portageville, which was recorded at the Missouri Capitol in Jefferson City on May 9, 2019: 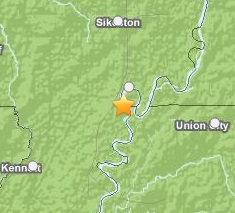 A small earthquake has been recorded in the heart of the New Madrid Seismic Zone.

The US Geological Survey reports the tremor happened at about 12:31 Wednesday about 6 miles south of New Madrid and registered 2.6 on the Richter scale, slightly stronger than what can typically be felt.