You are here: Home / Archives for Negro Leagues Baseball Museum

Harrison Ford was in Kansas City yesterday to help take part in a benefit and special viewing of the Jackie Robinson movie, “42,” which opens in theaters today.  The benefit sold out shortly after tickets went on sale in late March and it raised approximately $10,000 for the Negro Baseball Museum and Kansas City Sports Commission.

Also attending the benefit was Robinson’s son, David–Brian Helgeland, who wrote and directed “42” and Andre Holland, who plays sportswriter Wendell Smith. The 70 year old Ford plays legendary Brooklyn Dodgers general manager Branch Rickey, who recruited Robinson, breaking MLB’s color barrier in 1947. Before joining the majors as No. 42 with the Dodgers, Robinson played for and wore No. 5 for the Kansas City Monarchs of the Negro Leagues in 1945.

Check out the trailer.  Read the reviews.

The newest member of the Hall of Famous Missourians has been remembered as a great baseball player, manager and scout, and a man who overcame racism and adversity and lead others to do the same. 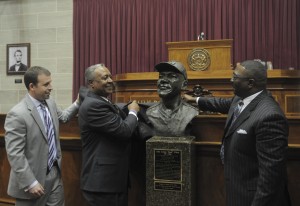 Buck O’Neil becomes the 39th person inducted into the Hall. Among those who spoke in his honor was the President of the Negro Leagues Baseball Museum in Kansas City, Bob Kendrick. “I tell people all the time that Buck had the same qualities of a Mother Theresa, of a Doctor Martin Luther King, Junior, a Gandhi. The only difference was, he could hit curve balls.”

Kendrick noted that the induction comes six years to the day after O’Neil fell one vote short of making it into the Major League Baseball Hall of Fame, something he says O’Neil took with great humility. “He was disappointed, but he walked into a room of about 300 people and he delivered one of the most amazing concession speeches that I’ve ever heard. When the world was saying he had been mistreated, he stood there at that podium and said, ‘Don’t be angry, don’t be bitter, don’t be upset with anyone that had anything to do with this decision. If I’m a Hall of Famer in your eyes, that’s all that matters to me. Just keep loving old Buck.'”

Shortly thereafter, O’Neil spoke for the induction of 17 other Negro League players into the Major League Baseball Hall of Fame. Kendrick says, “in what I believe, assuredly, is the most selfless act in American sports history.”

Five-time All Star with the Kansas City Royals, Frank White, called it an honor to be a part of the induction. He spoke about O’Neil’s commitment to making sure the story of the Negro Leagues and its players was told. “Had it not been for Buck and Ken Burns and their documentary that brought the Negro Leagues right into our living rooms, we probably never would have the Negro Leagues Baseball Museum in Kansas City today and we definitely wouldn’t have as good an understanding of the Negro baseball leagues as we do today.”

Inductees to the Hall are chosen by the Speaker of the Missouri House. Speaker Steven Tilley says O’Neil broke barriers. “He’s a man who was loved and revered by all that met him, and his genuine nature gave him a platform from which to speak that caused people to listen.”

O’Neil was a star player and manager for the Kansas City Monarchs and the first African-American coach in Major League Baseball. After the color barrier was broken in 1947, O’Neil is credited with more than three dozen baseball players making it into the major leagues.