You are here: Home / Archives for Ned Yost

Royals manager Ned Yost is recovering at home from a 20-foot fall he suffered while working on a deer stand on his farm in Georgia on November 4.  He shattered his pelvis and broke four ribs.  After his surgery, Yost says the trauma surgeon told him that in falls as damaging as he suffered, it leads to death 25-30% of the time.  Yost says if it wasn’t for having his phone with him, he would have bled to death.

Yost said players, Andy Reid, Dale Earnhardt Jr, Clint Boyer and even Larry the Cable Guy reached out to him in the days after the accident. 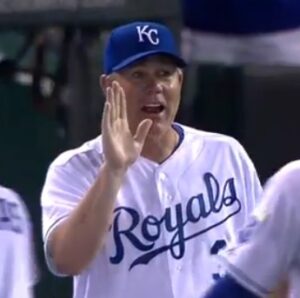 With the Royals 10-2 win over the Brewers on Wednesday night, Ned Yost picked up his 410th managerial win, tying him with Hall of Famer Whitey Herzog (1975-79) as the winningest skipper in franchise history.

There were times when Yost didn’t look like he was the right fit for this club, but upper management never wavered on the thoughts of dismissing Yost.

“Never thought about it,” General Manager Dayton Moore said prior to the game. “There has been no doubt in my mind that Ned was the absolute right manager, the perfect manager for what we were experiencing at the time.”

It would be fitting to have Yost set the Royals’ managerial record against the team that canned him during the stretch run in 2008.  Yost will look upon former Brewer teammates Lorenzo Cain and Alcides Escobar, who last played in Milwaukee in 2010, so help achieve that milestone.

Escobar is 5 for 14 with six RBI in the first three games of this home and home series after batting .184 in his last 24 games. Cain is 11 for 32 with an eight-game hitting streak, and 5 for 12 with two homers, a triple, a double and five RBI against the Brewers in the last three games.