You are here: Home / Archives for NBA Draft 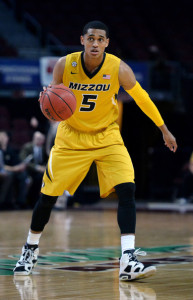 Jordan Clarkson gets picked by the Wizards and sent to L.A.

Former Mizzou basketball point guard Jordan Clarkson was selected by the Washington Wizards in the second round of the NBA Draft on Thursday night with the 46th overall pick.  He was then traded to the  Los Angeles Lakers.   Clarkson becomes the 44th Tiger drafted all-time. He is also joins former Mizzou standout Kareem Rush to be drafted and then traded for by the Lakers since the 2002 draft. Rush was drafted No. 20 overall in 2002 by Toronto before heading to LA.

Joining Clarkson in L.A. with be SEC rival Julius Randle of Kentucky, who was selected seventh overall by the Lakers.

Sikeston, Mo. native Otto Porter is expected by many to be taken number three overall in the NBA Draft. The Georgetown product will stick around the D.C. area and be a great compliment to John Wall and Bradley Beal (a Chaminade product) for the Wizards…that’s according to Yannis Koutroupis, senior writer for Hoopsworld.com.

Plus, Yannis gives us his insight on Phil Pressey, saying he only needs to impress one team, one GM to get drafted. He feels Pressey has skills that teams desire.

Laurence Bowers impressed NBA people at the IMG camp and Yannis thinks L-Bo could play as a small #4. The biggest question mark is health.

NBA scouts were impressed with Oriakhi after his national championship run with UCONN, but were scared off by his slow development the next couple of seasons following that run.

Watch more from Yannis ahead of tonight’s draft. 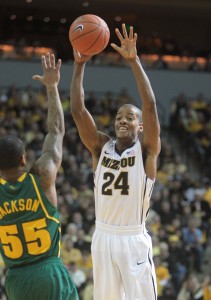 Two of Mizzou’s leaders from last season’s 30-win basketball season were picked in Thursday night’s NBA draft. Kim English (44th  to Detroit) and Marcus Denmon (59th to San Antonio) were each selected in the second round. It’s the first time since 1989 that two Tigers have gone in the same draft. Byron Irvin went No. 22 overall to Portland that year and Gary Leonard went No. 34 to Minnesota.

English is coming off a senior season where he won the Big 12 Tournament’s Most Outstanding Player honors, averaging 23.0 points in the three wins while also shooting 78.8%(26-of-33) from the floor. English averaged a career high 14.5 points and 4.2 rebounds, while shooting 52% from the floor and 46% from beyond the three-point arc.