You are here: Home / Archives for National Churchill Museum

A new documentary highlights Sir Winston Churchill and his famous “Iron Curtain” speech in Fulton 67 years ago. “Speeches that Defined the 20th Century – The Lessons of Churchill that Never Fade” has already aired on a St. Louis public television station and will air Saturday on KMOS in Warrensburg. 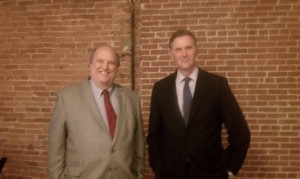 The documentary attempts to capture in 30 minutes Churchill’s story leading up to his visit to central Missouri in 1946. John Stephens produced and directed the film.

“Churchill is such an exciting story of dealing with adversity, of failing and succeeding. I mean, the man won the Second World War and then was thrown out of office. How much more fascinating can get you than that?”

“The many roles he played, his many successes but also his many failures and one of the most resonant considerations of Winston Churchill today is how frequently in his own life he is knocked down and how often he gets up, and reinvents himself and takes on board the lessons of those defeats and setbacks. What this film does is really commemorate the visit to Fulton, underscores its significance but also gives a far greater insight into who Churchill was.”

Havers says the “Iron Curtain” speech is important to more than Fulton’s or Missouri’s history, but to the world’s history, but when Churchill gave that speech it was not well received.

“The message Churchill delivered in 1946 while the embers of World War II were still aglow in Europe was a message that very few people wanted to hear, and it was a warning about the threat posed by Stalin and the Soviet Union … totally a message nobody wanted to hear … and what he effectively articulates is the shape of international relations for the next 40 years. The Cold War in many ways begins right here in Missouri.”

Havers and Stephens hope the documentary will stir up some additional visitors to the National Churchill Museum in Fulton. Stephens says its first broadcast in St. Louis did generate some more attendance.