You are here: Home / Archives for Mountain Grove Fire Department

Firefighters in south-central Missouri’s Mountain Grove say Saturday’s storm that damaged a grocery store, car wash, homes and other buildings was caused by a “shelf cloud,” that had winds of 70 to 80 miles per hour. There were no serious injuries. 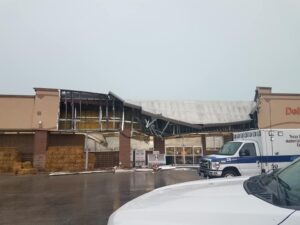 National Weather Service (NWS) Springfield meteorologist Eric Wise describes a shelf cloud as one that forms on the leading edge of wind, in a line of storms.

Mountain Grove, which has about 4,600 residents, is 60 miles east of Springfield. While the storm knocked Country Mart’s sign down and damaged the building’s exterior, the grocery store re-opened Saturday evening. Kelly credits townspeople and volunteers from nearby counties, who used heavy equipment and machinery to remove debris.

“And I could see businesses from across a couple of counties that were obviously there helping out and doing what needed to be done,” says Kelly.

Kelly says there were power outages in Wright and Webster counties, and that the storm also damaged a Mountain Grove car wash.

“One picture in particular that really struck me was a van that someone had parked inside a car wash to take shelter from the winds, and that part of the building collapsed on the car,” Kelly says.

Mountain Grove firefighters say shelf clouds form a bow echo, and that the highest winds are at the leading edge. Several homes were also damaged from strong winds.

Representative Kelly describes Mountain Grove as a resilient community, where residents rally and try to help others in need.

Click here to listen to Brian Hauswirth’s interview with State Rep. Hannah Kelly of Mountain Grove, which was recorded on August 30, 2020: