You are here: Home / Archives for Mosaic Life Care

Triumph Foods confirms 16 employees at its pork processing plant in northwest Missouri’s St. Joseph have tested positive for COVID-19. Workers who tested positive are in self-quarantine, according to Triumph. 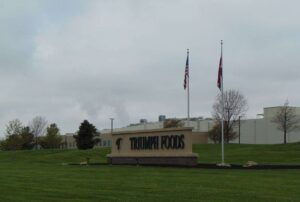 The company also confirms the state of Missouri has provided 2,800 tests for employees at the St. Joseph plant to be tested for the coronavirus. Triumph says those tests will be in addition to the tests already conducted by Mosaic Life Care in conjunction with the Buchanan County and St. Joseph Health Departments.

In a news release, Triumph says the additional tests will be administered onsite by Northwest Health Services “in a coordinated, phased approach over multiple days.” Triumph says it is working with the State of Missouri to finalize both the testing plan and the timing of the tests.

The news release was the first communication with the news media since Triumph disclosed Monday that it had two workers test positive for the coronavirus.

Triumph adds it has implemented the latest measures recommended by state and federal health authorities. The company says it has enhanced cleaning and sanitizing at the plant since the coronavirus outbreak. Workers wear face covers. Plexiglass dividers have been installed to create social distancing during breaks.

All employees at Triumph Foods in northwest Missouri’s St. Joseph will be tested for the coronavirus after several workers at the meat packing plant tested positive for COVID-19. The city of St. Joseph reports multiple positive cases of COVID-19 at Triumph, though the city does not state how many employees tested positive in the past 48 hours. An internal memo sent to employees Wednesday disclosed the plant recorded nine total cases.

The city says Northwest Health Services plans to conduct tests as early as this afternoon, depending on when test kits arrive. Northwest expected to receive results within 48 hours.

The Missouri Department of Health and Senior Services reports it has sent approximately 2,800 tests to St. Joseph which will be processed at the Missouri State Public Health Laboratory and a commercial laboratory.

By Brent Martin of Missourinet affiliate of KFEQ in St. Joseph

Mosaic Life Care in northwest Missouri’s St. Joseph will begin screening for the coronavirus, which has caused more than 100 deaths in China.

The Centers for Disease Control and Prevention have confirmed five cases in the United States and is keeping track of 110 potential cases, all from people who recently visited Wuhan, China. One patient is under investigation in Missouri after testing negative for the disease with flu-like symptoms.

Director of Infectious Diseases at Mosaic Life Care in St. Joseph, Dr. Scott Folk, says the virus has the attention of the medical community.

“The uncertainty, right now, with the Wuhan coronavirus, is how well the virus will adapt to human-to-human transmission,” Folk tells reporters during a news conference at Mosaic. “We know it can occur, but we don’t know well and how long that’s going to happen. And that’s why everyone is on edge right now.”

The virus has spread quickly since first reported in Wuhan last month. The number of confirmed cases jumped to 5,974 Wednesday, surpassing the 5,327 in mainland China during the SARS outbreak of 2002 and 2003.

Wuhan is a city of 11 million in east-central China.

Folk says much is unknown about the virus, including whether patients are contagious during the incubation period.

“Their risk of acquiring this infection is going to be based on exposure, that’s the bottom line,” Folk says. “So, exposure determines risk. If someone has been to Wuhan in the last two weeks, then yes, they are at risk. It doesn’t mean they necessarily have the infection, but they are at risk for sure.”

Folk says Mosaic will begin asking those admitted to the hospital whether they have traveled to Wuhan, China in the last two weeks. If no, Mosaic will ask if the patient has been in contact with someone who has been to Wuhan in the last 14 days.

Folk says it is the unknown about the coronavirus, which concerns the medical community.

Folk says he is waiting on information from the Centers for Disease Control before deciding how best to fight the coronavirus.