You are here: Home / Archives for Mizzou basketball 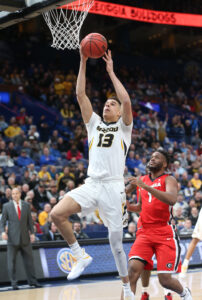 Missouri’s Michael Porter Jr. lays the basketball in for two points in the first half against Georgia in the SEC Tournament game at the Scottrade Center in St. Louis on March 8, 2018. Photo by BIll Greenblatt/UPI

When the players from Missouri say they’ve only seen a little bit of Florida State and in return they say they haven’t seen much video of the Tigers, it will be difficult for me to lay out what type of strategy Mizzou needs to employ in order to get past the Seminoles in this first round NCAA Tournament game on Friday night from here in Nashville.

However, after discussing the game with those who cover Florida State, listening to their players speak yesterday and what I know about the Tigers…I can lay out my “keys to a win.”

Blake Harris transferred.  Terrance Phillips suspended. Cullen VanLeer, injured. Jordan Barnett suspended.  That leaves Mizzou with just five players who have put any significant court time in plus Michael who says he is better than the 60 or 70% he claimed to be in St. Louis for that Georgia game,

In short, the Tigers have to stay out of foul trouble.  If they run into the same issues they had in the opening round of the SEC Tournament, they won’t have the ball for the final shot against Florida State.  The Seminoles will blow them out.  They are a much better team than Georgia.

Mizzou will have to get gritty.  Much like the Tigers, Florida State prides themselves on strong defense yet some knock them for their inability to protect the three-point shot.  It’s important to get Jeremiah Tilmon and Kevin Puryear looks inside.  Puryear has to be aggressive.  Given opportunities to drive to the rim, he must do so. There might be some shot blocks or misses, but the Tigers have to make Christ Koumadje (1.6 blocks per game) and Ike Obiagu (2.2 blocks per game) work.

Kassius Robertson needs an all-around better game.  He didn’t shoot the ball well and Cuonzo Martin said he didn’t have a good game defensively in the loss to Georgia.  The senior has been asked to do a lot, but they need him on both ends of the floor.  If Kassius is the main focus of Florida State’s defense…in other words if their goal is to shut him down and not get open, he should become the point guard and work to get the Porter’s open on the outside.

Given what the last three weeks have been like for Jontay Porter, people are talking about him, but I really believe he’ll have a big game again.  Florida State will be geared towards limiting Kassius and slowing down Michael, but if the big stage nerves don’t get to Jontay, he’ll have open looks from long range and he should try to get inside as well.  Florida State’s thought process may be to let Jontay score his points, but slow Michael and Kassius and they can win.

Then when Reed Nikko and Brett Rau come off the bench, they have to be invisible to us…the media and the fans.  What I mean by that is they are not going to score much, they won’t be big impact players.  Rebound, play good defense, don’t turn the ball over.  Eat up a couple of minutes at a time and don’t get exposed.

Be sure to check out my daily podcast for more great stuff and subscribe, rate and review from your favorite platform.
Facebook
Apple Podcasts
Stitcher
Sound Cloud

The Mizzou women gained their highest seeding since the NCAA championships moved to a 64-team bracket, locking down the 5-seed in the Lexington Region. No. 5 Mizzou (24-7) will face No. 12 Florida Gulf Coast (30-4) on Saturday, March 17, in Stanford, CA. Tipoff is set for 2:30 p.m. CT on ESPN2. The winner will take on either No. 4 Stanford or No. 13 Gonzaga in the Second Round on Monday, March 19.

Mizzou’s selection in this season’s Big Dance is the 12th in program history and the third under head coach Robin Pingeton. The Tigers have six all-time NCAA Tournament wins, with five of those coming by single digits, including Mizzou’s 66-64 triumph over South Florida last season.

Mizzou enters the NCAA Tournament having won 24 games, the most victories in a season since 1983-84. Sophie Cunningham talks about the team’s chances out west.

For the first time since 2001, the Mizzou men and women will be appearing in the NCAA’s together. Perhaps for the first time, four siblings will be in the NCAA Tournament at the same time. Michael Jr and Jontay for the men and sisters Cierra and Bri, who is a senior. Three of the four will suit up and play this weekend. 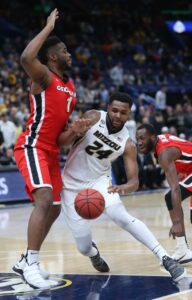 Kevin Puryear battles for the ball at the SEC Tournament in St. Louis (photo/Bill Greenblatt/UPI)

The Missouri Tigers earned the 8-seed in the West Region of the NCAA Tournament and will open play against 9-seed Florida State on Friday in Nashville.  The approximate tip-off time is 8:45 p.m. CT.  If Mizzou wins they will advance to a Sunday game most likely against 1-seed Xavier.

Mizzou head coach Cuonzo Martin confirmed that senior Jordan Barnett will be suspended for the game on Friday, following his arrest this past Saturday for DWI.  Martin said Barnett will travel with the team and has not made a decision beyond the Tigers first-round game.

Mizzou is one of eight SEC teams to make the tournament, the second most of any conference.  The ACC led all conferences with nine. Florida State is one of those teams.

The Seminoles were 20-11 and 9-9 in ACC play. Florida State will have just as much motivation for this win as Missouri.  They were knocked out of last year’s tournament in the second round after losing to Xavier.

Cuonzo on making the 8-seed

Martin has now led three different programs to NCAA Tournament appearances, becoming the 59th different head coach to do so after his prior trips with Tennessee (NCAA Sweet 16, 2013-14) and California (NCAA First Round, 2015-16).

Mizzou’s selection to this season’s Big Dance is the 27th in program history. Martin is the third first-year Mizzou head coach all-time to lead the Tigers to an NCAA Tournament appearance, with Quin Snyder and Frank Haith accomplishing the feat in 2000 and 2012, respectively.

Poor shooting, foul trouble, at times lackluster defense and an offense that looked out of sorts with the return of Michael Porter Jr.  There were many issues in the Missouri Tigers 62-60 loss to the Georgia Bulldogs on Thursday afternoon at Scottrade Center in St. Louis.

The good news is now Porter has a game under his belt and at least a week for Cuonzo Martin to weave a projected lottery pick back into a system that still must rely on output from Kassius Robertson and Jordan Barnett.

Georgia head coach Mark Fox was proud of the way his team defended the Tigers.  Mizzou was held to 34% shooting including just 8-of-25 from three-point range.  My biggest issue was Michael shooting too much and Kassius Robertson and Jordan not shooting enough.

Porter finished with 17 attempts and the two seniors combined to finish with just 18.  During Georgia’s 16-0 run in which the Tigers went nearly eight minutes without a point, Robertson says he wasn’t frustrated by his lack of attempts.

For the first time since the season opener, Michael Porter Jr will suit up and take the court for the Missouri Tigers when they open SEC men’s basketball tournament play tomorrow against either Georgia or Vanderbilt.

More from MPJ. How do you think he’s moving? #Mizzou pic.twitter.com/zEwSw8qX4u 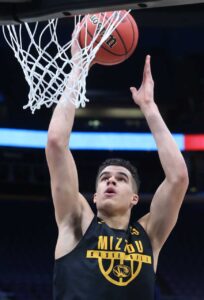 Michael Porter goes in for a layup during Mizzou’s practice on Wednesday at Scottrade Center ahead of the SEC Tournament. Photo/Bill Greenblatt/UPI

Porter underwent back surgery on November 21 and less than two weeks ago was cleared by doctors to begin full-contact basketball. It was until yesterday, that head coach Cuonzo Martin said Porter told him he would be ready to go.

The timing of his return comes at a good time for the Tigers. Cullen VanLeer injured his ACL in Saturday’s regular-season finale and Jordan Geist is questionable after he’s been labeled as “under the weather.”

Martin said Porter would not start but will play as long as he can and won’t be under any restrictions.

Kassius Robertson earned All-SEC First-Team recognition and Jontay Porter was named Co-Sixth Man of the Year, along with an SEC All-Freshman Team honor, as the Southeastern Conference office announced 2018 postseason awards, voted on by the league’s 14 head coaches.

Robertson ranks fifth in SEC games in scoring at 17.5 points per game and he finished the regular season ranking second in the SEC for both three-point field goal percentage (.444) and three-pointers made per game (3.3) in league play. The transfer from Canisius averaged a conference-leading 38.2 minutes per game, two minutes per game more than the league’s next closest player.

Jontay Porter scored 19 points and Missouri defeated Arkansas 77-67 on Saturday. The Tigers (20-11, 10-8 SEC) also saw big production from Jeremiah Tilmon who finished with 17 points.  The Tigers ability to get the ball inside also created a huge advantage at the free throw line.  Mizzou led a 33-15 edge.

The Tigers are the 5th seed in the SEC Tournament and will play next Thursday afternoon approximately around 2pm in St. Louis. Following Missourinet.com or @Missourisports on Twitter for the latest.

Watch Jontay and Jeremiah during their post-game press conference

Win or lose.  Regardless of what happened in Saturday evening’s regular-season finale against Arkansas, Mizzou head coach Cuonzo Martin never doubted if the Tigers were an NCAA team.  For him, the Tigers 77-67 win over the Razorbacks and the games next week in St. Louis at the SEC Tournament will only help determine seeding for the Big Dance.

With their 20th win of the season and a guaranteed 5th seed next week, this victory did go a long way to securing a spot in the NCAA tourney.  After their second three-game losing streak of SEC play which included a road loss to LSU, a stinker at home against Ole Miss and a blowout loss at Kentucky, it’s no surprise there may have been some outside doubt about the Tigers chances had they lost to Arkansas. 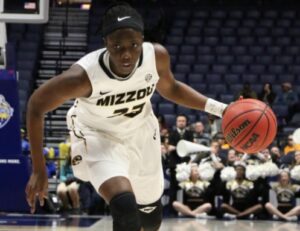 Mizzou held Ole Miss to 28.1-percent shooting and blocked a season-high 10 shots in a dominant defensive effort.  The Tigers held Ole Miss to just four points in the third quarter, building an 11-point lead after being up 28-26 at the half.  Mizzou led by as many as 17 in the fourth quarter.

The Tigers now faced third-seeded Georgia in the quarterfinals at 8 p.m.  The Bulldogs won the previous meeting between the teams in Athens, 62-50 back on Jan. 25.