You are here: Home / Archives for Missouri’s Rainy Day Fund

State Auditor Nicole Galloway has the job of overseeing the billions of federal dollars coming into the state to be spent quickly on various programs to ease the COVID-19 health and economic crisis.

“The [Parson] administration is going to have a lot of discretion and decision-making authority over this money and so citizens deserve to know how this money is coming in, where it is going and how it is benefitting them and their communities.”

The Auditor’s office is creating an online tool for Missourians to track CARES Act money. She says it’s similar to the way Auditor Tom Schweich monitored the incoming 2009 federal stimulus money in the Great Recession.

Galloway is just as concerned about the state’s reserve funds. “We will recover from this and as we recover we need to truly manage our state’s finances in a conservative way,” she says. 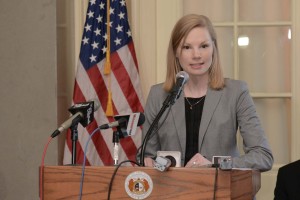 In October of last year, Missouri Auditor Nicole Galloway warned that the state’s “rainy day fund” is not ready for a recession or disaster.

A complete copy of the report is online here.

Today, in the midst of a coronavirus-caused economic downturn, her predictions are playing out.

“I have been consistently advocating for the state to be in a better financial position and that includes the state reserves,” she tells Missourinet.  She says that after a deep dive in the state’s finances, their work “revealed the difficult realities of Missouri’s budget due to years of policy decisions based on unrealistic expectations by lawmakers.”

“We knew that because we are not prepared, the state is going to have to significantly cut expenditures and services, investment in things like education and infrastructure — and that’s exactly what we’re seeing,” she says.

The fund is most often used to sustain the state’s daily operations cash flow, for example paying off tax refunds. The Parson administration borrowed $500 million in 2019, according to audits.  In 2018, Moody’s Analytics ranked the state near the bottom in its economic preparedness stress test.

It would take a governor’s recommendation and then two-thirds of both the House and Senate to access the reserve funds. According to the Missouri Office of Administration, the funds would be paid back over three years starting the next fiscal year.

Missouri’s health director testified Tuesday in Jefferson City about the one presumptive positive result for coronavirus in the state. The case involves a college student who is from the St. Louis suburb of Ladue. 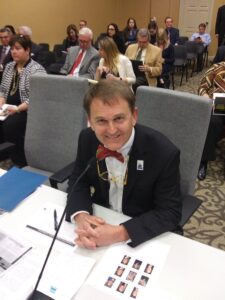 “That patient had, as (St. Louis County Executive) Sam Page has said, had done the right things,” Williams testifies. “She had come from a country which is one of our flagged countries, she had gotten symptomatic.”

Dr. Williams tells lawmakers that the woman called a hotline, got into care and become sicker, then was tested.

The Centers for Disease Control (CDC) has not confirmed the St. Louis County case yet. Dr. Page told reporters Saturday that the case is highly likely to come back confirmed as positive.

President Trump signed the coronavirus emergency funding package, which contains about $9.9 million for Missouri. Dr. Williams tells lawmakers that the state has received the appropriation for the funding, but not the funding itself yet.

“Which (the funding) will be incredibly helpful,” Williams testifies. “I’ll cut to the chase, we do not plan to ask for GR (general revenue) funding, we think we have the funds to cover what we need.”

Williams testifies that DHSS is developing guidelines about how that $9.9 million will be spent.

Dr. Williams also testifies that about 35 to 40 tests have been done in Missouri for coronavirus. All of the others in Missouri have tested negative.

Former State Sen. Rob Schaaf, R-St. Joseph, who is a physician, also testified before the committee on Tuesday.

He testified that Missouri lawmakers should be ready to dip into the state’s Rainy Day Fund. Schaaf also predicts coronavirus will impact Missouri prisons and hospitals.

Former Senator Schaaf is also calling on lawmakers to give Governor Parson the authority to release non-violent prisoners immediately. Schaaf works for a company that provides health care to Missouri inmates, and emphasizes he is not speaking for the Missouri Department of Corrections (DOC). He also says he did not clear his remarks with the governor.

As for Dr. Williams, he reiterated Tuesday what he said last week to a House special committee: that he’s hoping for the best but preparing for the worst regarding the coronavirus.