You are here: Home / Archives for Missouri’s Law Enforcement Memorial

There are now 716 names on the walls of Missouri’s Law Enforcement Memorial outside the state Capitol in Jefferson City. The Wall of Honor is a tribute to officers who gave their lives to protect and serve others. 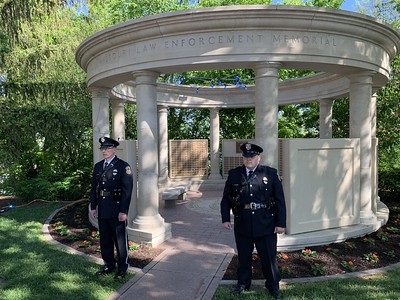 Eight names of officers who died in the line of duty in 2020 and seven others killed between 1907 and 1946 were added to the wall as part of annual ceremonies to remember Missouri’s fallen men and women in blue.

The weather could not have been better for the candlelight vigil Friday night and memorial service Saturday morning. The ceremonies were held outside of the Capitol along the banks of the Missouri River.

While the candles burned Friday night and the dome gleamed blue, several family members shared stories about losing their loved ones in uniform. Many of them thanked organizations supporting the survivors – for being there every step of the way to help them deal with their pain. 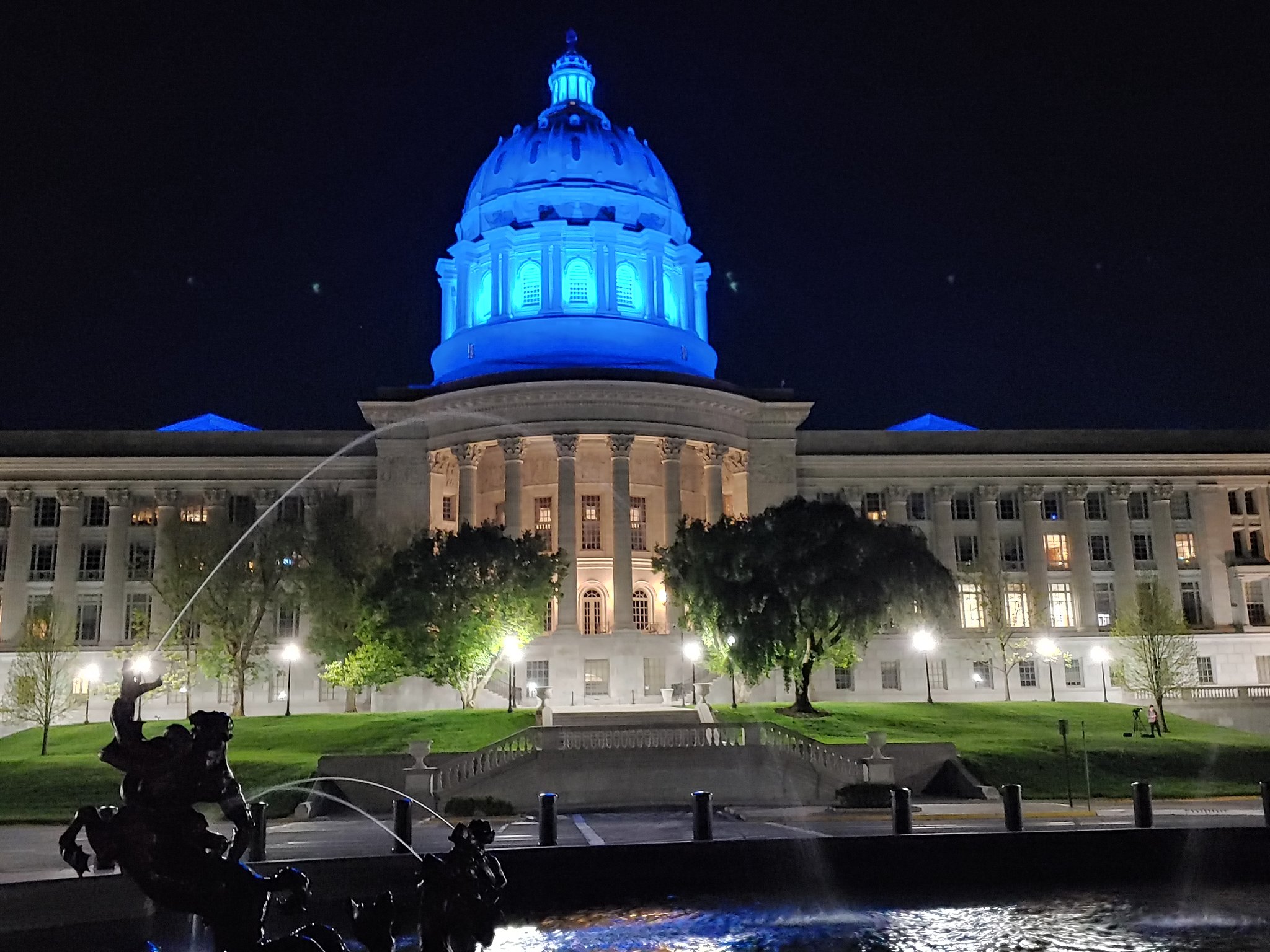 Sandy Clark, the mother of DeKalb County Sheriff Andy Clark of northwest Missouri, spoke at the vigil. Sheriff Clark was killed on June 3, 2020 in a vehicle crash while responding to help a deputy in an emergency.

“His heart would be broken the way that cops are being treated now. He would be mad and he would be sad,” Clark said as she fought back tears. “He would tell you all to hold the line. He was so proud of his department – most of them are here today. He loved you all. This has been the best thing for our family is these people who took us in. They’re our family now. But I don’t want my son to have died for nothing. If anything, hold the line for him!” 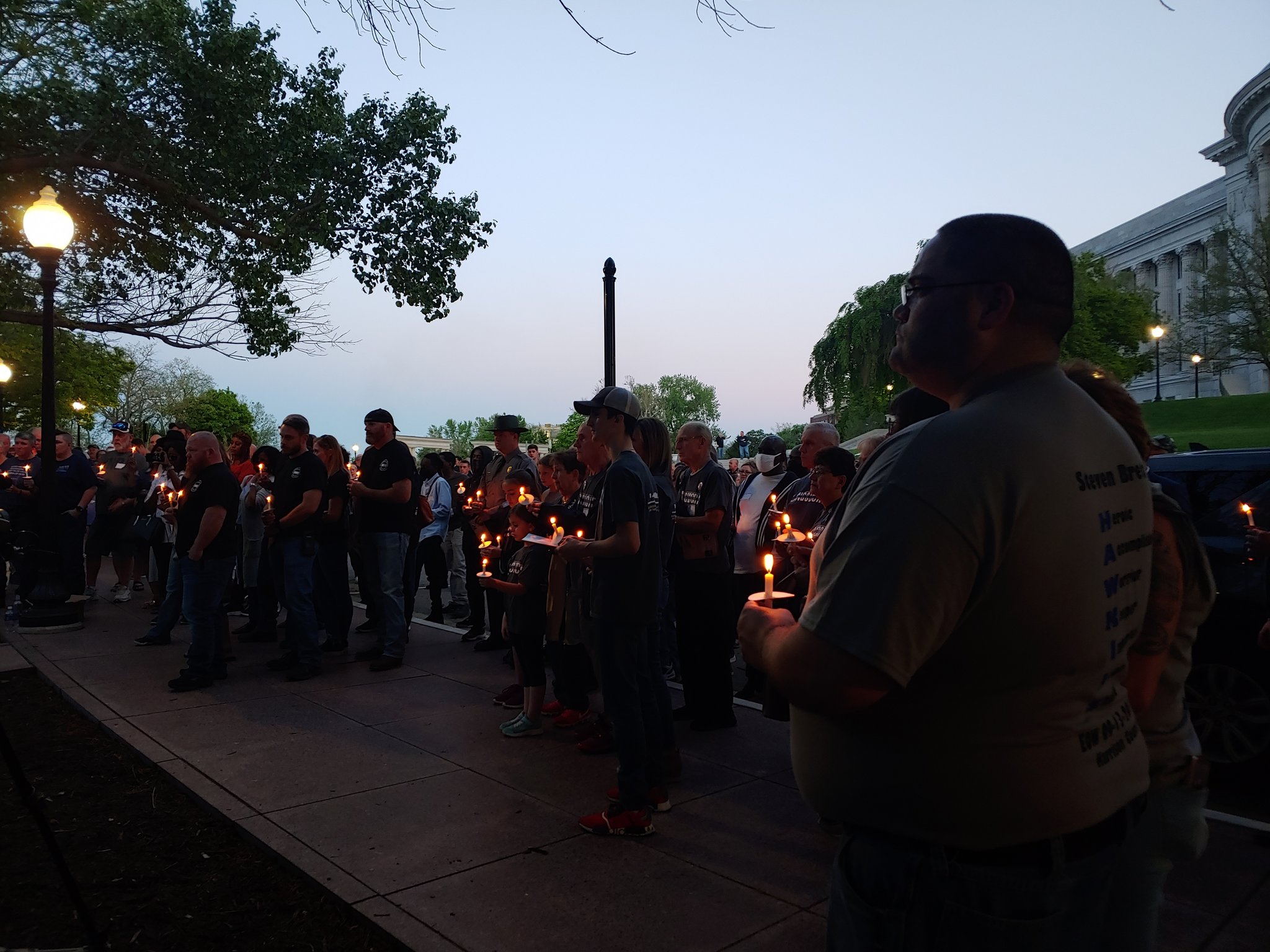 Al Bohannon, the father of fallen St. Louis police officer Tamarris Bohannon, also talked. His son died August 30, 2020 after responding to a shooting and then getting ambushed.

“Even though my son lost his life, I’m still proud of him. He died for something he believed in. As a child, he always said, ‘I want to protect those who can’t help protect themselves.’ The moment that he told me that he wanted to pursue being an officer, I stood by him. Sleep doesn’t come easy and I know you all know that. I must always remember one thing – is that he is now defending us in another way. Like all of our children, our brothers, our sisters, they’re up there now fighting in a greater Army for something that is yet to come,” he said. “I believe that God lends our heroes to us for a precious moment and then he takes them away. But he gives us an opportunity to love them. Thank you for the first person that finally realized that there are a lot of us out there hurting. The only way to beat this – the only way to overcome it – is to do it together.” 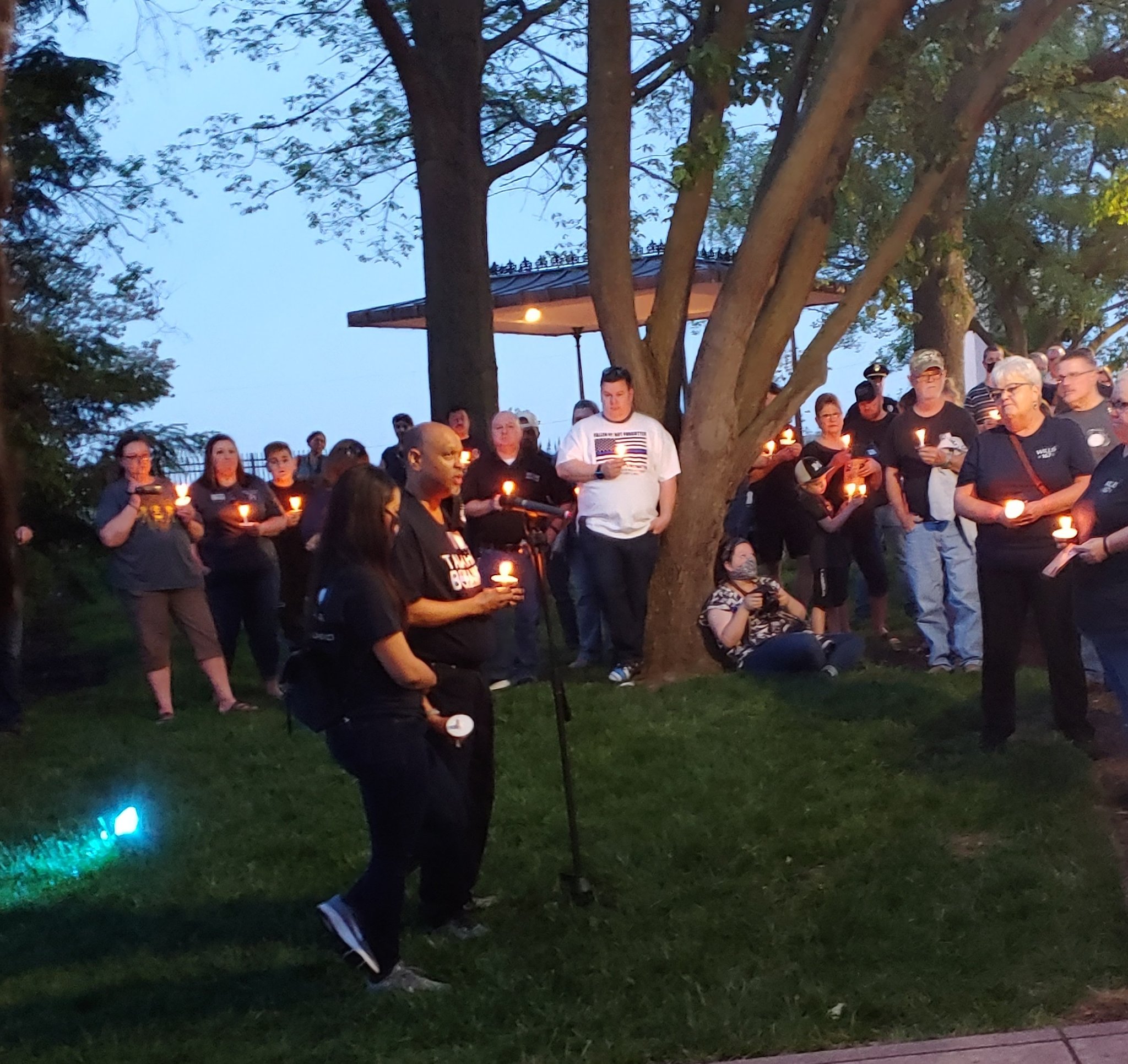 Sheri Walsh, wife of Springfield police officer Christopher Walsh, said she talked to her husband about 30 minutes before he died.

Walsh said she and her husband were in the final stages of adopting a child. After about eight years of miscarriages, she said they were finally in a good financial place to add to their family. They had a new home. Their car was paid off. Her husband was wrapping up his military career and could be there for their child’s most precious first years.

On March 16, 2020, officer Walsh was shot and killed when he and another officer confronted an active shooter at a convenience store.

“I know how hard it is to have that sudden loss, like a candle blown out just like that,” said Walsh. “One minute you’re whole, and then the next you’re in a whole new reality.”

During Saturday’s ceremony, the bagpipes sounded and trumpets played Taps. Family members of the fallen heroes placed white carnations in a wreath to remember their loved ones.

Lt. Governor Mike Kehoe spoke at the service. He talked about the Tomb of the Unknown Soldier at Arlington National Cemetary in Fort Myer, Virginia. 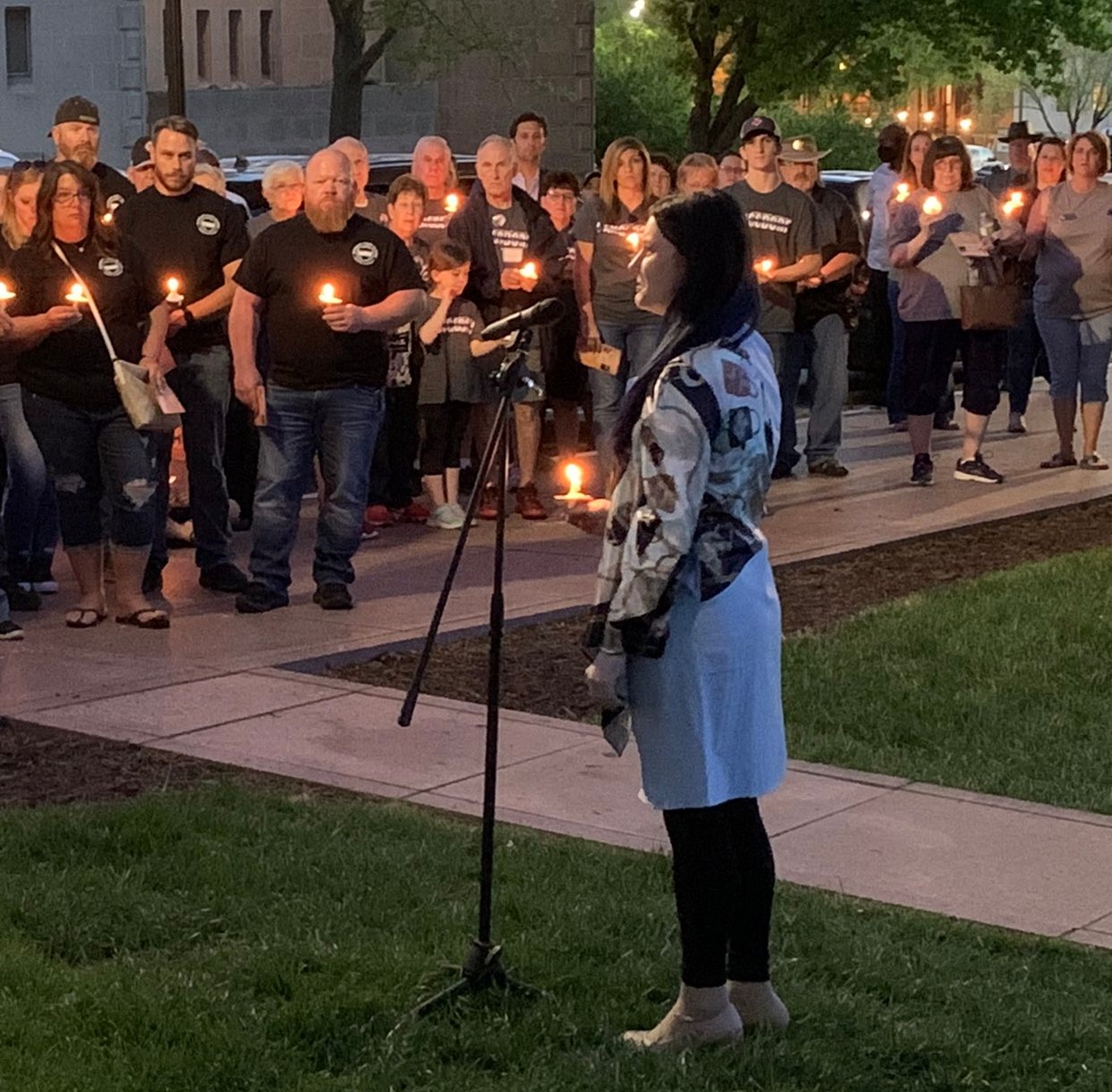 “As dignified, compelling, and solemn as the Tomb of the Unknown Soldier is, I’m grateful we do not have a Tomb of the Unknown Officer here in Missouri. The names on this wall behind me are known. They were husbands and wives, mothers and fathers, sisters and brothers, aunts and uncles, and sons and daughters,” said Kehoe. “Today, we remember them. Today, we offer condolences for those for whom the grief of loss is still very raw and real. Today, we etch their names into this monument to ensure their sacrifice is never forgotten. Today, we see an earthly example of the promise of Scripture in the book of John, 15:13: ‘that no greater love hath any man than this, that he lay down his life for a friend.’”

“The brave men and women of law enforcement wake up each morning, put on their uniform, and say goodbye to their family and loved ones, not knowing if they’ll return at the end of the day,” Schmitt said. “Law enforcement officers face unknown risks and danger every day, and sometimes, tragically, make the ultimate sacrifice in their commitment to keeping the communities they love safe. It’s imperative that we continue to honor and remember that sacrifice.” 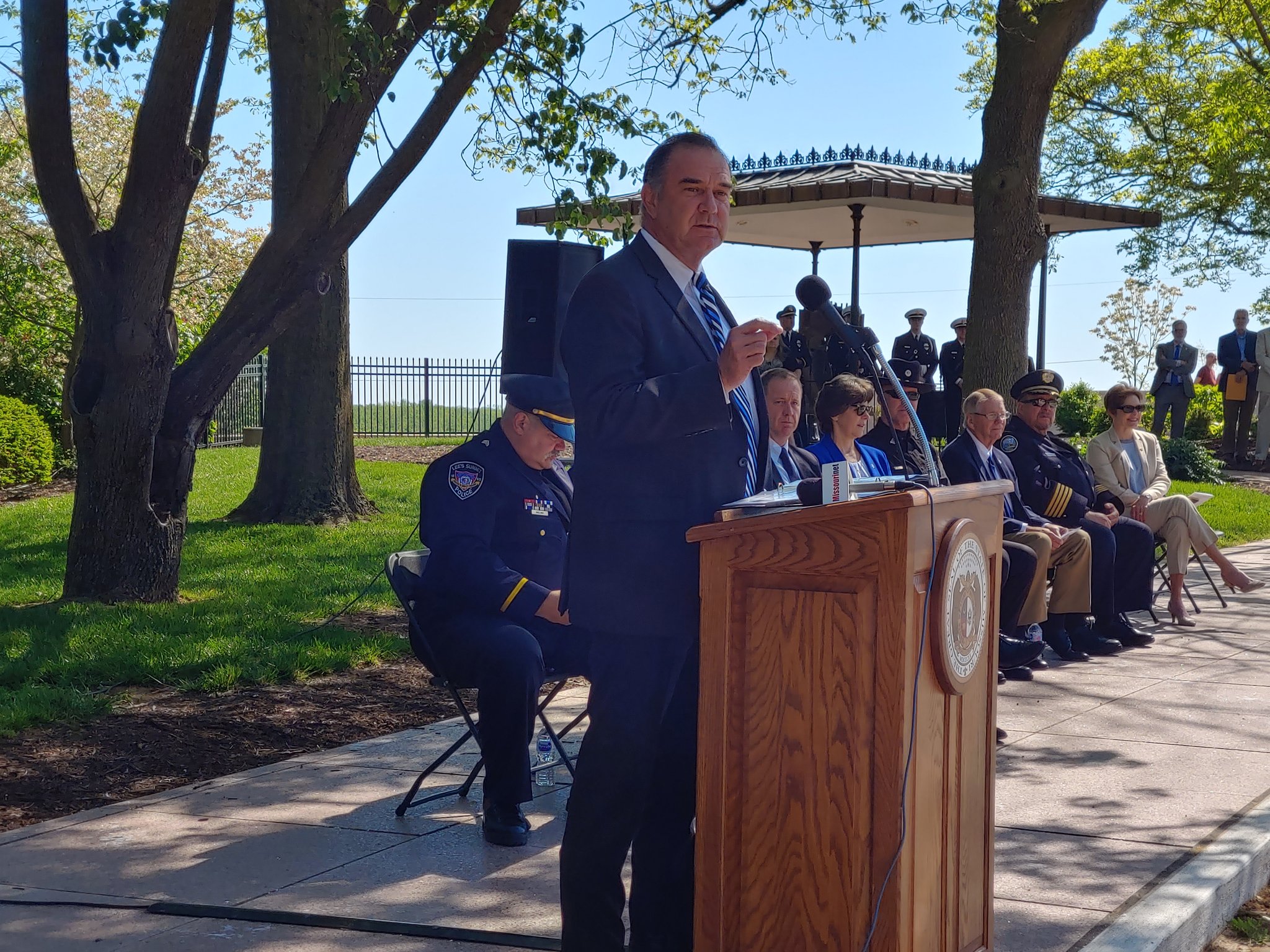 Here are the names added to the memorial wall this year:

On March 16, 2020, Officer Christopher Walsh was shot and killed when he and another officer confronted an active shooter at a convenience store in southwest Missouri. 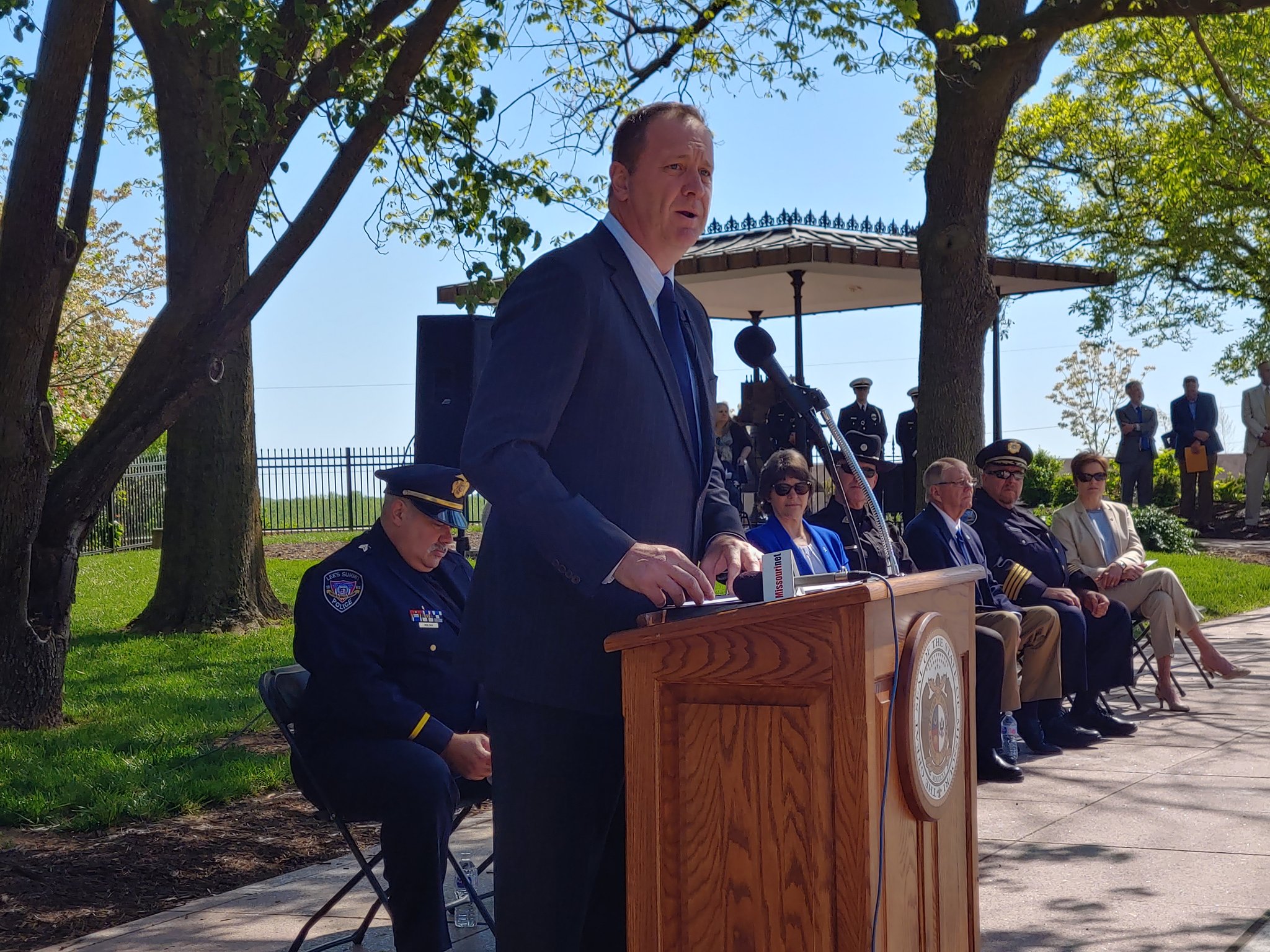 Sheriff Andy Clark was killed in a vehicle crash near northwest Missouri’s Osborn while responding to assist a deputy in an emergency situation.

Police Officer Tamarris Bohannon died on Aug. 30, 2020 after suffering from a gunshot wound the night before. He and another officer were ambushed as they responded to a shooting call in the Tower Grove South neighborhood. 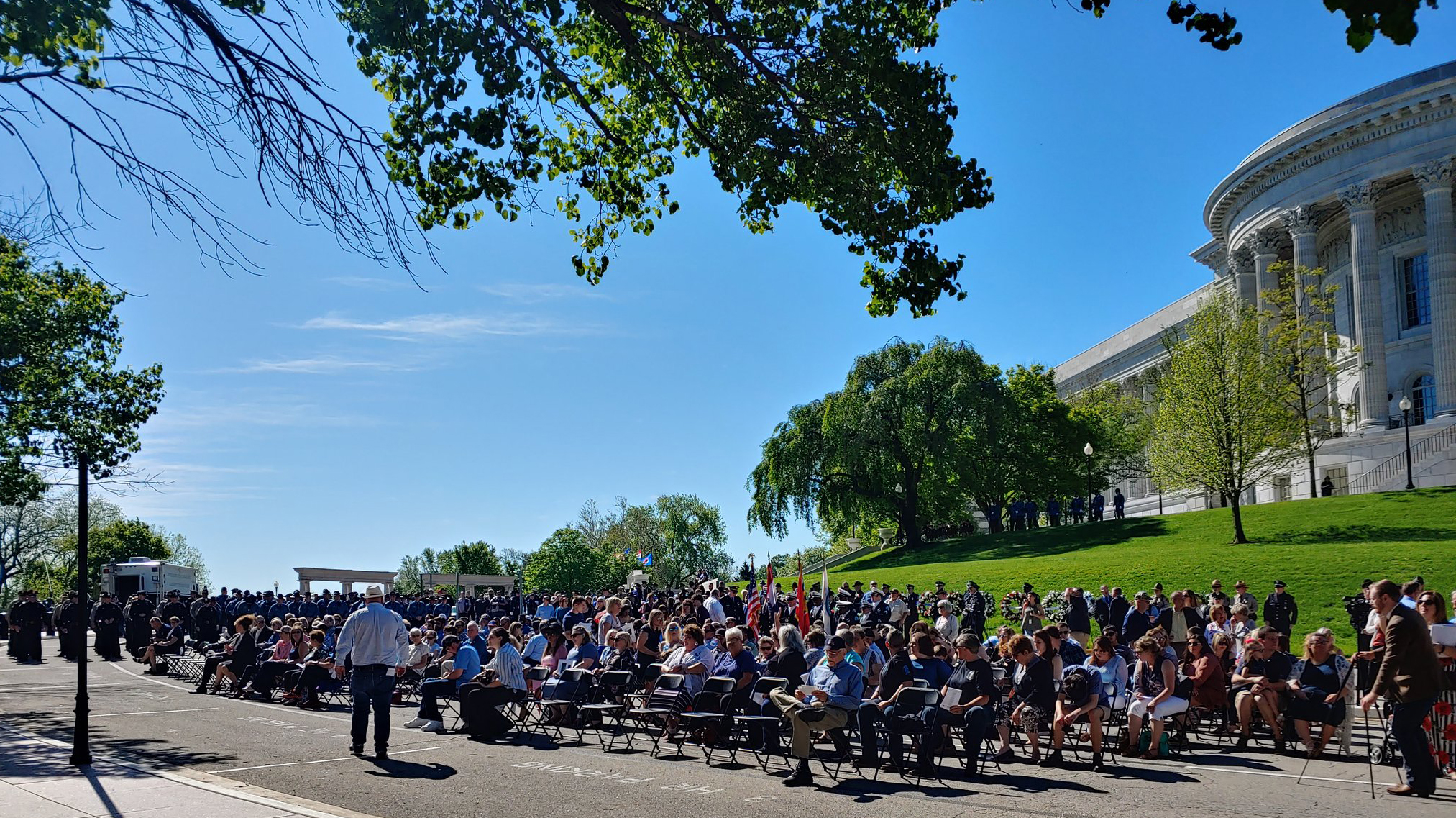 Assistant Chief Rick Groves died after contracting COVID-19 as a result of his law enforcement service to the Kennett Police Department in southeast Missouri. 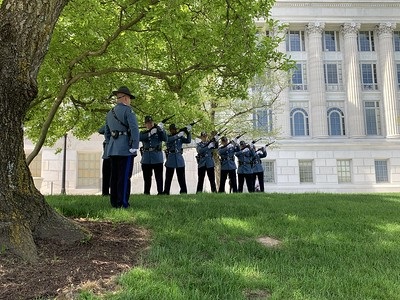 Corrections Officer Richard Wright died on Nov. 19, 2020 after getting COVID-19 as a result of his service as a corrections officer. He served at the Women’s Eastern Reception, Diagnostic and Correctional Center in northeast Missouri’s Vandalia. 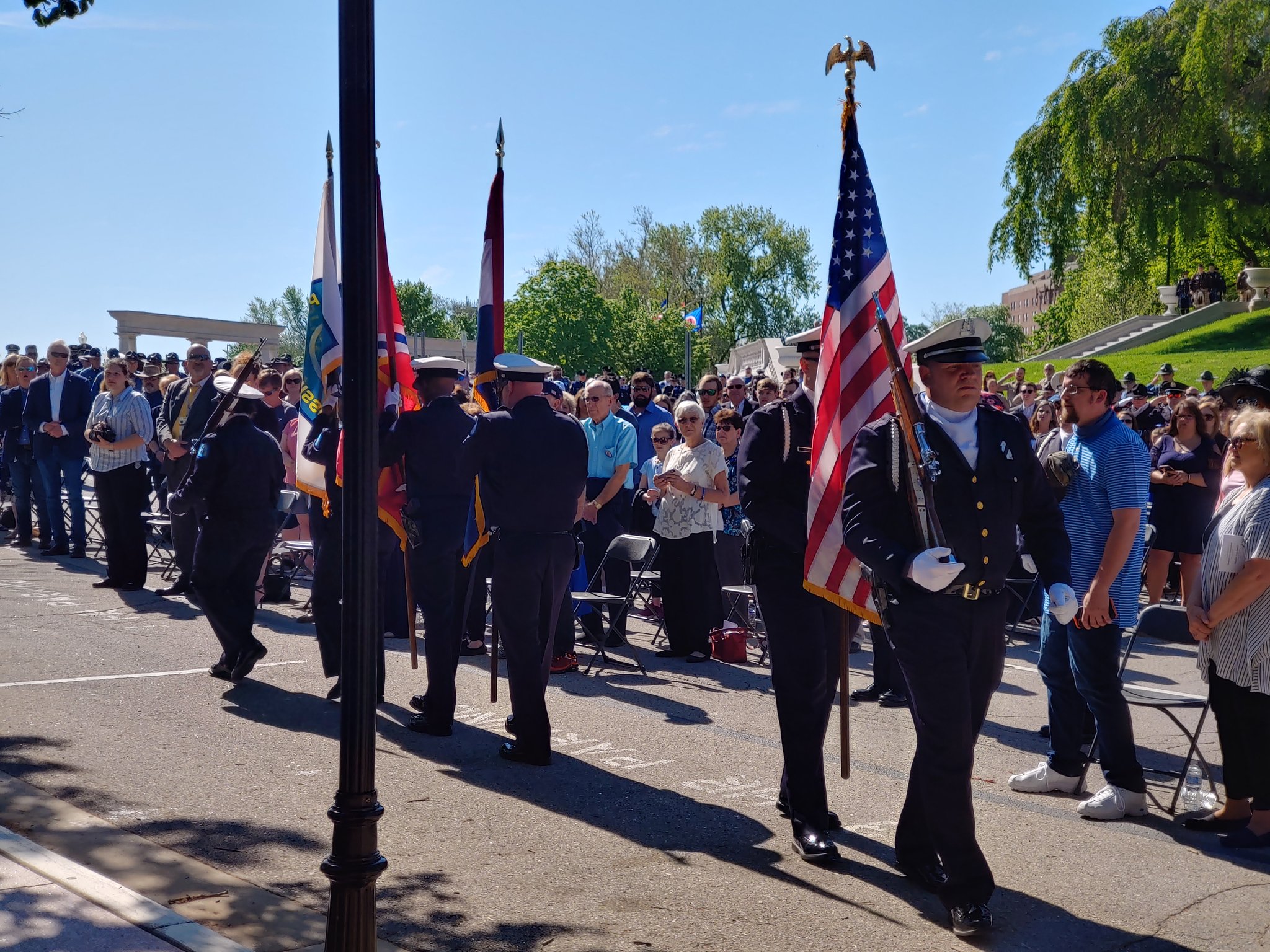 Detention Officer Dwight Willis passed away on Nov. 22, 2020 after catching COVID-19 as a result of his service as a detention officer in southwest Missouri.

On Dec. 5, 2020, Sergeant Herschel Turner and a Bellefontaine Neighbors Police Department officer near St. Louis had stopped a stolen vehicle. Sergeant Turner was struck and killed by the vehicle of another officer arriving at the scene to help. That officer swerved to avoid striking a vehicle and unintentionally struck Sergeant Turner. 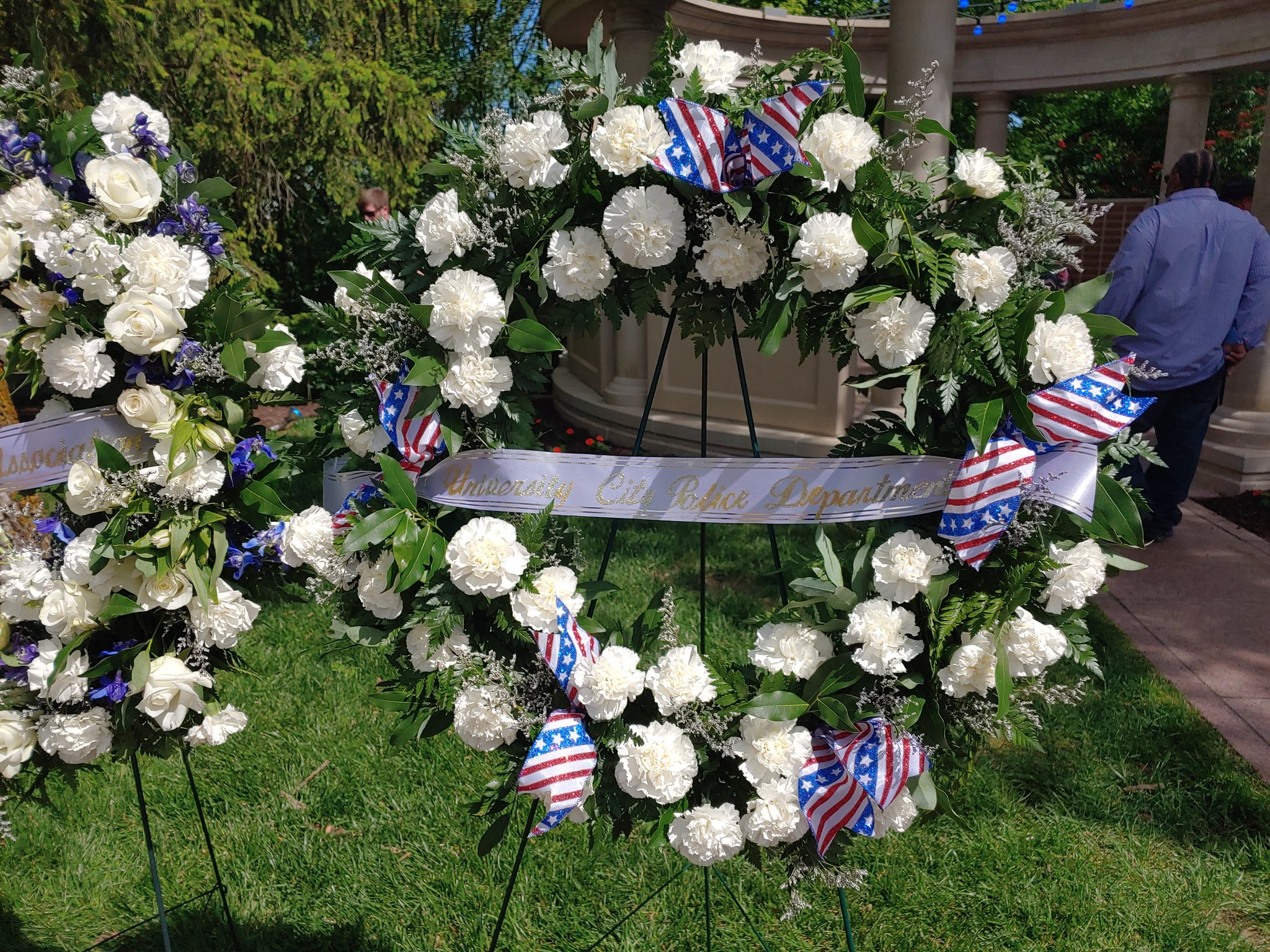 On Dec. 28, 2020, Lebanon Patrolman Kendle Blackburn died after getting COVID-19 as a result of his law enforcement service in southern Missouri. 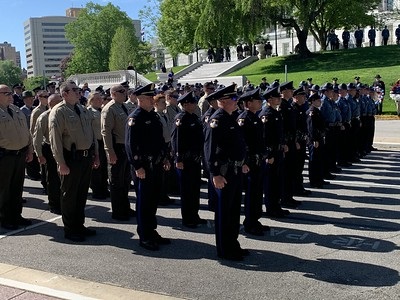 City Marshal Albert Kopf was shot to death in the chest by a homeless man after responding to a call from a woman about a disturbance at the woman’s home. He managed to return fire and struck his assailant with one shot. Marshal Kopf died from his wound three days later, on Sept. 3, 1907. He had only been serving as acting city marshal for 10 days in the eastern Missouri town.

City Marshal John W. Burns was shot to death on April 21, 1922 in a gun battle with five men who had attempted to rob him at gunpoint while on duty near Kansas City. 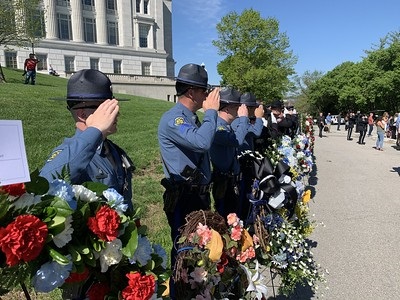 Patrolman William E. Griffin was shot several times and killed on June 10, 1923 after responding to an armed robbery at the Telegraph Inn, which was located in St. Louis County. 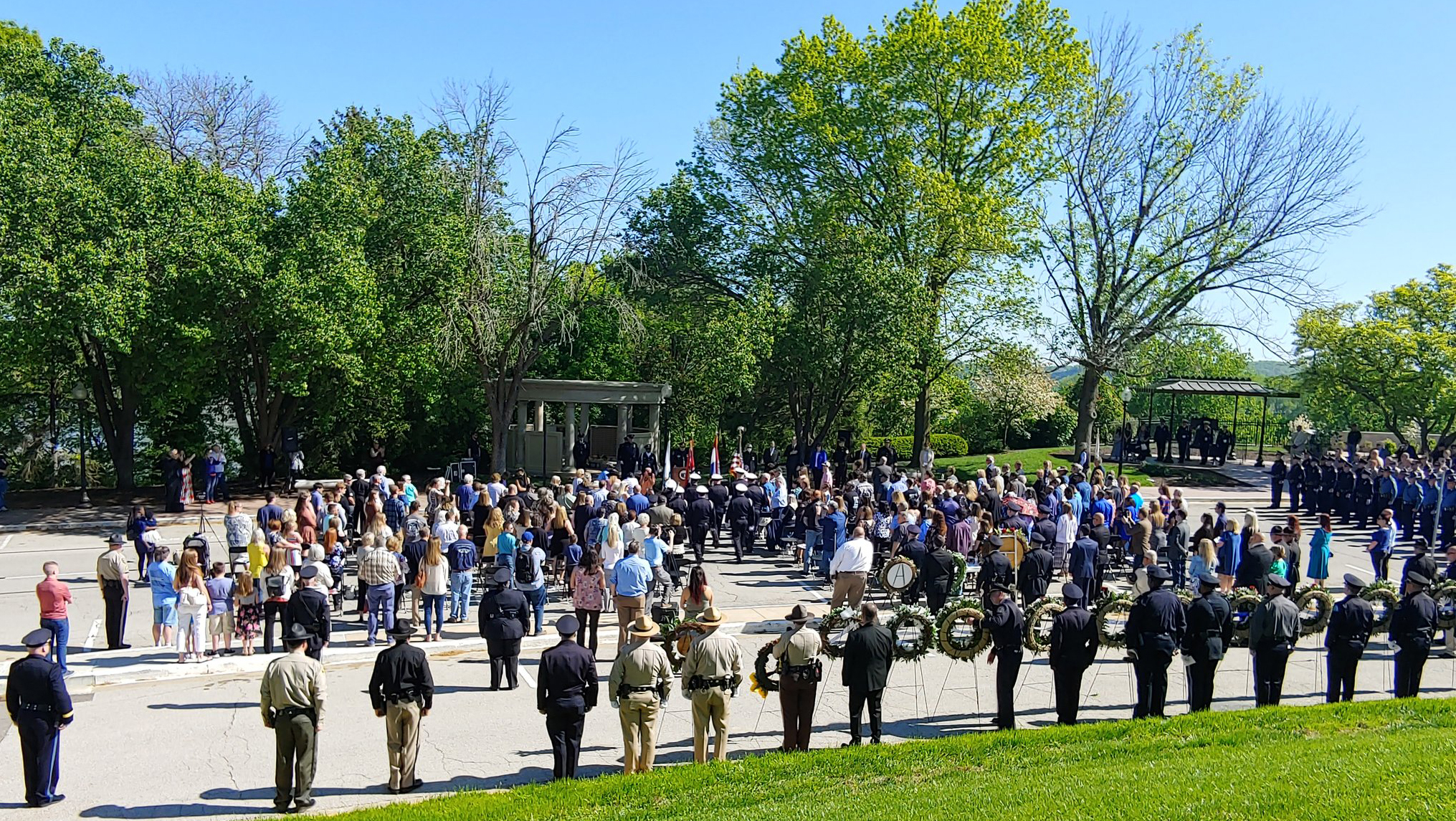 Marshal David W. Waymire was shot as he attempted to arrest a man wanted for vehicle theft near Crane in southwest Missouri. He died as a result of his wounds days later, on March 13, 1927.

On Jan. 3, 1929, Marshal S. Dent Owen died from injuries he received in a head-on crash in northeast Missouri. He was driving a vehicle that had been stolen and that he had recovered during an investigation. 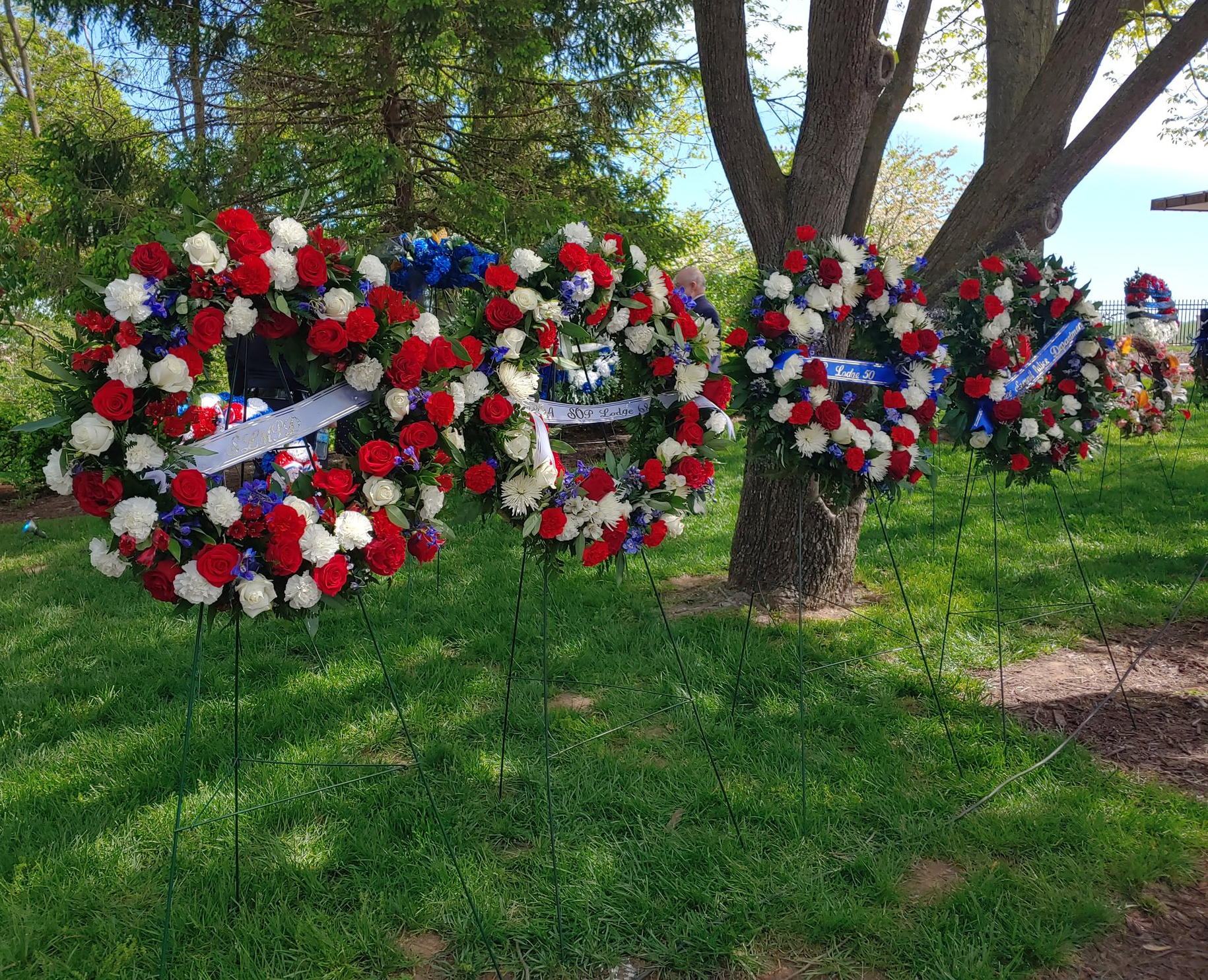 On Sept. 9, 1933, Special Agent James E. Tines was shot to death after being targeted by two armed robbers near Springfield.

On Feb. 12, 1946, City of Sullivan Marshal Herman E. Weirich died, four days after the vehicle he was traveling in while on duty was struck by a train in eastern Missouri.