You are here: Home / Archives for Missouri’s broadband grant program

Legislation extending Missouri’s broadband grant program through 2027 will be signed into law by the governor on Thursday morning in central Missouri’s Tipton.

Governor Mike Parson (R) will travel to Co-Mo Connect in Moniteau County for Thursday’s 10:15 a.m. ceremonial signing. The bipartisan bill is sponsored by State Rep. Louis Riggs, R-Hannibal, who will join the governor in Tipton. 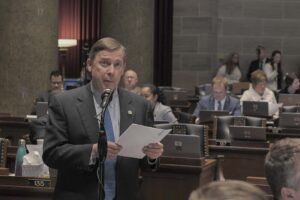 Missouri’s broadband internet grant program is for unserved and underserved areas in the state. The grant program is currently scheduled to expire in August 2021. House Bill 1768 extends the program until June 2027.

In addition to extending the broadband grant program, the Riggs legislation requires the state Department of Economic Development (DED) to maintain a record of all federal grants awarded to entities to provide, maintain and expand rural broadband in Missouri.

Representative Riggs’ legislation was approved by the Missouri Senate in May by a 31-0 vote. The House approved it in May, on a 143-3 vote.

Governor Parson emphasized the importance of rural broadband, during a February address to the Missouri Farm Bureau in Jefferson City. At the time, the governor noted there were about ten Missouri school districts that didn’t have broadband.