You are here: Home / Archives for Missouri’s 2021 session

A veteran Missouri lawmaker has pre-filed legislation that would authorize sports wagering. 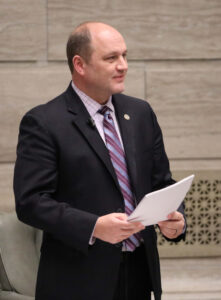 The bill from State Sen. Denny Hoskins, R-Warrensburg, would allow you to place wagers on Missouri’s 13 licensed riverboat casinos and on the internet.

Senator Hoskins projects that Missouri would receive anywhere from $37 million to $50 million annually in new tax revenue, if his Senate Bill 18 is legalized.

He says 26 other states have authorized it, and that Missouri is losing revenue to other states during tight budget times.

He says other Missourians are traveling to Las Vegas to wager on sports.

The Missouri House Special Interim Committee on Gaming released a 15-page report in December 2019, which concluded that Missouri will likely lose revenue if it doesn’t remain competitive with other states. Hoskins says state lawmakers will be trying to “plug a lot of different holes” in the state budget during the 2021 session.

“I most certainly don’t want to raise taxes, but I would like to see the tax income from this new revenue stream (sports wagering) come to the state of Missouri,” Hoskins says.

The House interim committee’s 2019 report viewed the legalization of sports betting as a “legitimate opportunity to increase state revenues” for education and other programs.

Hoskins represents eight counties in western and northwest Missouri in the Senate: Caldwell, Carroll, Howard, Johnson, Lafayette, Livingston, Ray, and Saline. He served in the Missouri House from 2009-2016, before he was elected to the Senate. Hoskins was re-elected in November, to a second Senate term.

Click here to listen to Brian Hauswirth’s full interview with State Sen. Denny Hoskins, R-Warrensburg, which was recorded on December 2, 2020: