You are here: Home / Archives for Missourinet

Missouri’s governor says infrastructure and workforce development will be two of his main themes during Wednesday afternoon’s State of the State Address in Jefferson City. The speech will begin at about 3. 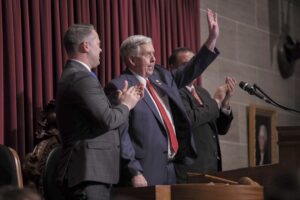 Governor Mike Parson (R) says the state is on the right track.

The governor will also address education, saying he wants to make sure high school students are ready for tomorrow’s workforce.

Rural health care will also be a theme, according to Governor Parson.

Increasing violence in St. Louis, Kansas City, Springfield and Columbia will also be a topic during State of the State. In 2019, there were 194 murders in St. Louis and 148 homicides in Kansas City.

“You’ll see me talk about some of the violence in some of the urban cities, we’ve got to address that issue,” says Parson. “So I think there will be some discussion on that.”

St. Louis Police testified before the House Judiciary Committee in Jefferson City on Tuesday, saying there were 194 murders, 2,600 shootings and 349 carjackings in St. Louis in 2019.

Long notes this is a continuation of ongoing meetings the four mayors have had with the governor’s office relating to public safety and violent crime.

Speaker Haahr and Leader Quade addressed the issue with Capitol reporters during the opening day of session. Both are focused on witness protection.

The State of the State Address is an opportunity for the governor to outline his 2020 legislative priorities. It will be delivered in the House chamber, before a joint session of the Legislature.

Missourinet will have live coverage of State of the State, starting Wednesday at 3. We’ll also have live interviews with state lawmakers in both parties, after the address. News director Brian Hauswirth will anchor our coverage.

Click here to listen to Brian Hauswirth’s full interview with Missouri Governor Mike Parson (R), which was recorded on January 7, 2020 at the Missouri Asphalt Pavement Association’s conference in Columbia: