You are here: Home / Archives for Missourinet Versailles affiliate KTKS 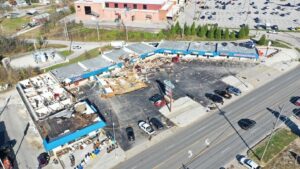 “And so that’s something that we can still receive new information on and update as we go, but right now preliminarily it looks like straight line winds,” Titus says.

Osage Beach Police Chief Todd Davis tells us the storm damaged at least seven to eight businesses in the King’s Plaza shopping center, which has a Randy’s Custard location. The shopping center is a popular spot for Lake-area tourists and local residents.

Drone photos show that the storm blew roofs off many of the businesses. Walls have caved-in as well, and Missourinet Versailles affiliate KTKS reports vehicles in the parking lot were also damaged during the storm.

The NWS had warned Friday that severe storms and hail were possible Saturday afternoon and evening, across the Ozarks.

There are no reports of any serious injuries from the storms.

Titus says the storms also caused damage in the small town of Dixon, which is about 100 miles northeast of Springfield. The town has about 1,400 residents.

“But that Dixon area, north of Waynesville, got hit pretty hard. Had some mobile homes flipped over and some other damage up in that area,” says Titus.

He says while the damage in Dixon appears to be from straight line winds, it’s still under investigation.

Titus says their office is still deciding whether to send survey teams to impacted areas.

“We base that on what we’re seeing out in the field, as far as evidence. So we’ll be making that determination coming up too,” Titus says.

A former state lawmaker from mid-Missouri’s Morgan County has resigned as Missouri’s Children’s Division director, after about three months on the job. 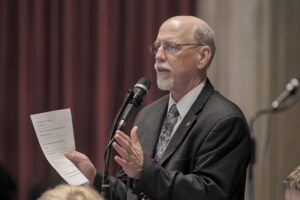 The Children’s Division is part of the state Department of Social Services (DSS), and is responsible for the administration of child welfare services. Its responsibilities also include foster care and adoption.

There have now been six Children’s Division directors in the past seven years.

Wood, who served almost eight years in the Missouri House, resigned his seat in June, after being named the new Children’s Division director. Wood could not seek re-election, because of term limits.

He told Missourinet Versailles affiliate KTKS in May that he planned to stay for at least four years and that the division needed stability. Wood, who served as the House Budget Committee’s vice chairman, also told KTKS that he hoped his experience would help in funding the Children’s Division.

“I know it’s going to be a tough budget cycle because the revenues aren’t coming in, we’re going to have to look at cuts,” Wood said in May. “And with my experience on the budget and knowing how to deal with that and how to defend certain pieces, I think I’m going to be a good advocate for the department.”