You are here: Home / Archives for Missouri Western State College

Missouri Western State University will induct four individuals and one team into its Intercollegiate Athletics Hall of Fame during ceremonies on Saturday, September 25, including the voice of the Griffon since 1975, Bob Orf, who works for Missourinet affiliate KFEQ in St. Joseph.

END_OF_DOCUMENT_TOKEN_TO_BE_REPLACED

Jessica Martin (Missouri Western) and Kira Lazenby (Northwest Missouri) have been voted MIAA Soccer Players of the Week for the week of Aug. 27-30 as selected by a conference SID panel.

MIAA SOCCER OFFENSIVE PLAYER OF THE WEEK Jessica Martin, F, Missouri Western Jessica Martin had an outstanding weekend for the Griffons. Martin who is coming off a 2008 season ending knee injury had two goals and an assist this past weekend. Martin also had a game winning goal. Last season Martin had just one goal and two points. With the two goals against Southwestern Oklahoma State she is now the Griffon record holder for most points in a game with four.

Missouri Western football exploded for 49 first half points as they routed the Northern State University Wolves in their 2009 season opener 49-14. Western  racked up 438 yards of total offense in the game.

The Griffons opened up the contest going 55 yards on seven plays with David Fowler finishing the drive off, on a nine yard reception from Newhart. The touchdown marked the first career touchdown for Fowler.

Redshirt freshman running back Michael Hill scored his first career touchdown and the Griffons fourth touchdown of the game from two yards out with 2:49 left in the first quarter. Northern State finally got on the board with 11 second left in the first quarter when the long snap went over freshman punter Austin Barnes and Northern’s Calvin McGruder picked up the ball and scampered in from 12 yards out to make it 28-7.

The Griffons would continue to score at ease in the second quarter as they would put up 21 unanswered points to go into the half with the huge lead, 49-7. In the second quarter Newhart would find Clausen from 14 yards out and Ferrell McGhee from eight yards out to put the Griffons up 42-7 with 8:14 left before half. Backup quarterback Barron Bradshaw would finish off the first half scoring when he connected on a 68 yard scoring strike with Houston with 4:03 left before the half.

Two-time defending MIAA soccer champion Central Missouri got the nod over Truman State for preseason No. 1 in the 2009 MIAA coaches poll, the league office announced Thursday.

Truman State followed Central in the No. 2 spot, tallying 59 points with three first-place votes. The Bulldogs finished second in the MIAA in 2008 and have won eight of the 10 conference soccer championships. Truman was an NCAA quarterfinalist a year ago.

Nebraska-Omaha came in at No. 3 with 49 points. The Mavericks placed third in the MIAA in 2008 and qualified for the NCAA Tournament.

Washburn took the fourth spot, receiving 43 points. The Lady Blues were the fourth-place finishing team in the MIAA a year ago before making it to the second round of the NCAA Tournament.

As did the first four spots, numbers five through nine also stayed true to form from the final 2008 MIAA standings.

Southwest Baptist came in at No. 5 with 35 points, Northwest Missouri State was voted sixth with 30 points, Missouri Southern State was selected seventh with 22 points, Emporia State took the eighth spot with 13 points and Missouri Western State was ninth with 11 points.

Defending MIAA volleyball champion Emporia State was selected as preseason No. 1 by a slight margin over Washburn in the 2009 MIAA coaches poll.  Central Missouri was the top state school coming in third.

Coming in at No. 3 was Central Missouri, as the Jennies picked up 79 points. Central finished fourth in the MIAA in 2008 and made it to the NCAA regional semifinals.

Truman State tied with Nebraska-Omah for the fourth spot with 69 points. Truman finished as the 2008 MIAA runner-up and advanced all the way to the national semifinals.

Story courtesy of the  MIAA conference .


Three-time defending Mid-America Intercollegiate Athletics Association (MIAA) Champion Northwest Missouri State was selected as preseason No. 1 in both the MIAA coaches poll as well as the first-ever MIAA media poll, it was announced Monday afternoon at the MIAA Football Kickoff Press Conference at the Downtown Marriott in Kansas City.

Central Missouri was tabbed preseason No. 3 in both polls, receiving 59 points in the coaches poll and 321 points with one first-place vote in the media poll.

Numbers five and seven through 10 were exactly the same in both polls. Missouri Western State was voted number five in both, while Missouri Southern State was seventh, Emporia State was eighth, Truman State was ninth and Fort Hayes State was 10th.


The NCAA has sanctioned the women’s basketball program at Missouri Western for letting an ineligible athlete play for two seasons.  The school has been placed on two years’ probation and will forfeit any win in which the player was on the floor.

The St. Joe News-Press says their sources confirmed it was MIAA MVP Inga Buzoka who played in 06 and 07.  She played some pro ball in Europe from 2000-2003.

The team will vacate their wins from the 2005-2006 and 2006-2007 season.  These findings come out a year after it was learned the Griffons’ coach at the time, Josh Keister provided players with monetary gifts that were deemed improper. 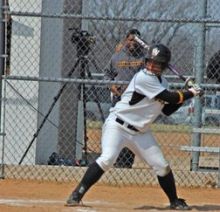 The Missouri Western softball team continues to add on to the school and conference record for wins in a row as they made it 26 in a row with a sweep of the Truman State Bulldogs.

Western was able to shutout the Bulldogs in game one winning 3-0 and then hung on in game two for the 7-5 victory. Western sits at 29-4 overall and 4-0 in MIAA play.

In Game 1, the Griffons never allowed a player to get past second base as they held the Bulldogs just four hits in the contest earning the 3-0 victory.  In Game 2,  the Griffons used a two run homerun by Mandie Nocita and a three run homerun by Becky Diehl to score the first seven runs of the ball game.

The Griffons will be in action next on Saturday, April 4 when they take on the Fort Hays State Tigers in Hays, Kan. The two teams will play a doubleheader starting at 12:00 pm.

Click here for more on the Griffons’ softball team

Tickets to the 2009 MIAA Basketball Championships at Municipal Auditorium in Kansas City are on sale through the Missouri Southern Ticket Office at 417-625-9366.  The men will open up the tournament this year with first-round games on Thursday, March 5, while the women will open up their tournament beginning on Friday, March 6.

All-tourney passes are just $40 and will allow you to see all 14 games. Single session passes are $15 and will be available at Municipal Auditorium only.

A new attraction to the tournament this year will be the MIAA/Golden Ox Fan Pavilion, located just across the street from Municipal Auditorium at the Barney Allis Plaza. The pavilion will be a heated structure featuring several televisions and other activities. The Golden Ox will offer several of their menu items, with a variety of drinks available.

This is the seventh year the MIAA has hosted the tournament at the Auditorium in Kansas City. For more tournament information, including partner hotels visit www.themiaa.com