You are here: Home / Archives for Missouri Tiges

Andrew Baggett hit a 35 yard field goal in the fourth overtime as the Missouri Tigers rallied to beat the Tennessee Volunteers 51-48 in Knoxville. It was the Tigers second SEC win and 11th in overtime, most in Division I.

Mizzou got to overtime when James Franklin, on a 4th and 12 from the 25, hit Dorial Green-Beckham who was wide open in the endzone with :47 left in regulation. That capped off a huge second half comeback after the Tigers fell behind 21-7 at the half and 28-14 late in the third quarter.

Mizzou scored first in OT when Franklin lobbed a pass to Jimmie Hunt for 24 yards giving the Tigers a 35-28 lead. Tennessee answered with a short screen pass and took at 42-35 lead on their second OT possession. Franklin came back and found Marcus Lucas for an 18 yard pass on third down to knot the game at 42-42. Mizzou needed the touchdown after the Vols ran a fake FG for a 13 yard touchdown. DGB got his second touchdown of the game to make 48-42 on a 10-yard catch.  The Tigers missed the 2-point conversion which is required after the second OT. Tennessee was stopped on their 2-point try after tying the game and had the first chance on offense in the fourth OT, but was stopped on a 4th and 3.

Kendial Lawrence had a big second half, scoring two touchdowns, including a 77 yarder on the first play of the second half finishing with 153 yards.

The Tigers finished with 454 yards of total offense. 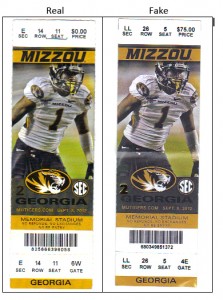 Real vs. fake Mizzou tickets for the Georgia game.

“These fake tickets look as real as any produced by Mizzou,” Weimer said. “The fake tickets even had the correct disclaimers on the back sides. It’s also possible that the individual selling the ticket does not know it is fake. He or she might have bought the fake ticket and is trying to turn it around for a quick profit along with legitimate tickets. Unfortunately, the victim might not realize it’s a fake ticket until it’s scanned for entry into the game.”

At the Georgia game, ticket scanners recorded more than 400 “missed scans,” which could indicate fraudulent tickets.

Patrons assume all risks for tickets purchased through sources other than the Mizzou Athletics Ticket Office. More information about tickets is available at mutigers.com

We were on the field for halftime of the Mizzou Black and Gold game on Saturday.  The only two hours of sunshine this weekend were shining down on Faurot Field for the much anticipated unveiling of Missouri’s new look.  Here’s some video of the soccer, volleyball, basketball and football uniforms.

Plus, following spring games, a look at some of Mizzou’s SEC rivals:

END_OF_DOCUMENT_TOKEN_TO_BE_REPLACED

SEC Quick Hits. New on Missourinet.com, SEC Quick Hits, focusing on news, features, facts and stats that affect the University of Missouri and the SEC.

Georgia loses in other CBE Classic Semifinal to Mizzou’s next opponent, #18 Cal.

Semifinals of the SEC’s greatest games.