When Gov. Mike Parson takes the oath of office next month, his inauguration will look and feel like a celebration of the state’s 57th governor making his mark on history and a celebration of Missouri officially becoming a state. That’s according to Parson’s campaign manager Steele Shippy. He tells Missourinet the Inaugural events will be historic.

“It’s also the bicentennial,” says Shippy. “So, there’s a lot of focus around celebrating the state’s rich heritage and history. There’s going to be elements of not just about the governor – it’s about celebrating our state at the same time.”

“To kick off Missouri’s bicentennial, we will celebrate our state’s rich heritage with a historic Bicentennial Inauguration,” First Lady Teresa Parson says in a press release. “The strong bonds that tie Missourians together have endured for over 200 years and will provide the strength needed to continue moving Missouri forward.”

The inaugural events will kick off with a prayer service on January 9 in the governor’s hometown of Bolivar in southwest Missouri. The gathering will be at Southwest Baptist University at 4 p.m.

The traditional ceremony of the governor taking the oath of office will be on January 11 at 11:30 a.m. on the south lawn of the Missouri Capitol in Jefferson City. Other statewide elected officials being sworn in at the ceremony include Missouri Lieutenant Governor Mike Kehoe, Attorney General Eric Schmitt, Secretary of State Jay Ashcroft and State Treasurer Scott Fitzpatrick.

The crowd at the ceremony can expect a 19-gun salute and a Missouri National Guard flyover has been requested.

The press release says the committee has consulted with state and local health officials and will follow their guidance to protect the attendees, participants, and staff from COVID-19. Health and security screenings will be conducted. Masks will be provided and encouraged. Social distancing measures will be taken and hand sanitizer will also be available.

The event is free and open to the public. Guests are encouraged to RSVP to help with social distancing efforts. More information, including how to request tickets to the events, will be announced at a future date.

Following the inauguration ceremony, the committee will release information about future inaugural events, such as the traditional inaugural ball and parade, in conjunction with Missouri’s bicentennial celebrations later in 2021.

“As we learn more about COVID-19 and how it’s progressing or regressing, that will dictate what types of events or the timing of those events,” Shippy says.

Shippy did not have information about the cost associated with these events. Parson’s Bicentennial Inaugural Committee is raising money for them through a newly-created 501c4 organization called Moving Missouri Forward. The release says benefactors and their donations will be disclosed at a later date.

Missouri’s state treasurer and the House Budget Committee chairman will travel across the state on Monday, urging Missourians to vote against Medicaid expansion on the August ballot. 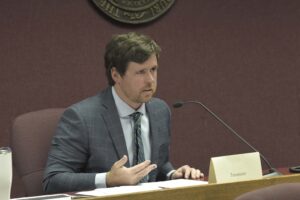 Medicaid, which is formally known as MO HealthNet, is a federal and state program that assists with medical costs for residents with limited incomes.

Missourians will cast ballots on Amendment Two, the Medicaid expansion proposal, on August 4. If approved by voters, Medicaid would be expanded for residents between the ages of 19 and 64 with an income level at or below 133 percent of the federal poverty level, as set forth in the Affordable Care Act.

Medicaid expansion supporters say the measure would provide healthcare to Missourians who earn less than $18,000 annually.

Chairman Smith says the August Medicaid expansion ballot measure is projected to cost $200 million in state general revenue, and $1.8 billion in federal funding each year. He also says it will raise Missouri’s Medicaid rolls from 950,000 to more than 1.2 million participants.

Smith also says COVID-19 has had a major impact on Missouri’s economy.

“More than $1 billion has been cut from the state’s general revenue budget in recent months,” Smith says, in a statement. “Just this month, services requiring state support have been drastically reduced, including elementary school funding, college scholarships, and support services for those in need. Amendment Two will be a knockout blow to the state budget as more services will be cut or eliminated to pay for the healthcare of able-bodied adults.”

Supporters of Medicaid expansion disagree, saying the measure will create thousands of new jobs, many of them in rural communities.

The Missouri Chamber of Commerce and Industry and many unions have endorsed Amendment Two. The Chamber has quoted a study from the Missouri Foundation for Health, which says Medicaid expansion will create more than 16,000 new jobs annually during its first five years, while increasing personal income by $1.1 billion annually.

The Foundation for Health says most of the new positions would be outside of St. Louis and Kansas City, and that 90 percent of those jobs will pay more than $15 an hour.