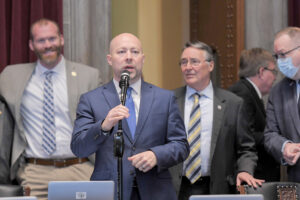 Budget Committee Chairman Cody Smith (R-Carthage) and the House Appropriations director presented House Bill 21, which is an eight-page bill. It’s just over $1 billion, with $894 million of that coming from federal funds.

“This is an appropriation, a rate increase, that again as you (the House Appropriations director) noted, it’s written as a one-time increase. I think it’s up for up for question as to whether or not this should be a general revenue increase, or perhaps an f-map increase,” Smith testifies.

He says this involves a one-time nursing facility rate increase of about $10 per day.

While Chairman Smith opposes Medicaid expansion, his plan would provide an additional $735 million to the MO HealthNet Division for transitional payments. House Appropriations Director Glenn Fitzgerald testifies this is a brand-new proposal. 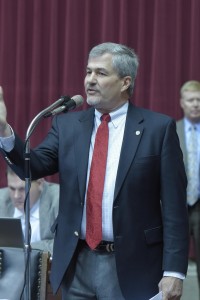 There was no testimony in support or in opposition to Smith’s bill on Tuesday. Chairman Smith tells the audience that he hopes for a mark-up on either Thursday or Monday. This is a short week in Jefferson City, due to the Easter break.

Medicaid is a federal and state program that assists with medical costs for residents with limited incomes. 53 percent of Missouri voters approved Medicaid expansion in August, although it failed in 105 of the state’s 114 counties. Rural House members from those districts have led the opposition to funding Medicaid expansion.

House Democrats and Amendment Two supporters say Missouri voters have spoken. They say Medicaid expansion will help the working poor by expanding the program for residents between the ages of 19 and 64 with an income level at or below 133 percent of the federal poverty level.

The House voted to give final approval last week to a $34.1 billion state operating budget, which does not contain funding for Medicaid expansion.

We also learned during Tuesday’s one-hour hearing that former State Rep. Kirk Mathews (R-Eureka) is serving as the interim director at Missouri Medicaid, with Director Todd Richardson out on leave.

Mathews has been MO HealthNet’s chief transformation officer. He was first elected to the Missouri House in 2014 and and served two terms, from 2015-2018.