You are here: Home / Archives for Missouri State Fairgrounds

About $8 million in new upgrades and repairs will be starting soon at the sprawling state fairgrounds in west-central Missouri’s Sedalia. 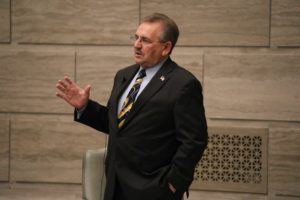 Senate Transportation, Infrastructure and Public Safety Committee Chairman Doug Libla, R-Poplar Bluff, pushed for the repairs and spoke about the issue on the Senate floor, even though his southeast Missouri district is 260 miles away from Sedalia.

Senator Libla, who represents eight southeast Missouri counties, tells Missourinet that investing more money in state fairgrounds facilities will pay dividends in the future. He also says the state fair is an opportunity for urban children to hear about farming.

“We need to make sure our farm families are being taken care of, make sure they’re being represented, and this (the state fair) is a good way for the urban kids to also learn about agriculture,” says Libla.

A spokeswoman for the Missouri Department of Agriculture (MDA) told Missourinet on Friday that the $8 million in projects at the state fairgrounds are all in various stages of development, with design, bid or construction starting soon.

A complete electrical upgrade to the swine barn is planned, along with a new 150-site campground for exhibitors only. Planned improvements also include a complete renovation to the old sheep pavilion.