You are here: Home / Archives for Missouri State Bears 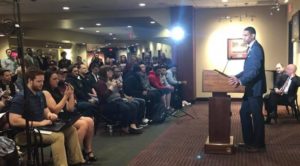 Missouri State University men’s basketball introduced Dana Ford as the program’s 18th head coach.  The 33-year-old served the last four years as head coach at Tennessee State University. He is widely regarded as one of the nation’s most promising young head coaches and was awarded the Ben Jobe Award in 2016 as the nation’s top Division I minority coach.

“Within the first 15 minutes of talking with Coach Ford, I was excited about him,” said Missouri State President Clif Smart. “I could tell he was extremely excited about Missouri State. He and his wife have great personal stories. I don’t think we could have found a better fit.”

Ford had orchestrated one of the best turnarounds in NCAA history when he accepted the TSU job in 2014-15 as the nation’s youngest Division I head coach at the time. The Tigers went from a 5-26 record his first season to a 20-11 a year later.

Over his last three years, Ford has led the Tigers to a combined 52-39 record.

Coach Ford said he was hired to win championships.

“When you consider what Coach Ford has done, his resume is impressive,” said Kyle Moats, MSU’s director of athletics. “But when you consider that he was the third-youngest head coach in Division I this season – with four years of head coaching already under his belt – then you can understand why all of us are so excited here today.”

A native of Tamms, Ill., Ford is a 2006 graduate of Illinois State University where he was a four-year letterman for the Redbirds under coaches Tom Richardson and Porter Moser from 2002-06. He was a regular starter and led ISU in steals as a senior. He went on to successful assistant coaching stints at Winthrop and Wichita State under coach Gregg Marshall and later at Illinois State under coach Dan Muller. His coaching resume also includes assistant coaching stops at Chipola (Fla.) College and Tennessee State.  Ford has been an assistant coach on two NCAA Tournament teams at Winthrop (2006-07) and Wichita State (2011-12) as well as a NJCAA national final four run at Chipola College (2008-09).

“I’m looking forward to getting started,” said Ford. “I have always had a great admiration for this university and the great basketball program here. It is an honor to return to the Missouri Valley Conference and be the one selected to carry on a great Bears basketball tradition.”

Ford’s contract, which was also approved by the Board of Governors, is a five-year agreement through March 31, 2023. He will earn a base salary of $375,000 his first two years and $425,000 in years three, four and five. Additional achievement incentives for NCAA and NIT appearances, conference championships, coaching honors and APR standards are also included in the agreement.

He and his wife, Christina, have two sons, Carson and Cameron, and a daughter, Charlie Rose.

Ford replaces Paul Lusk who was let go after seven seasons as head coach of the Bears from 2011-2018. 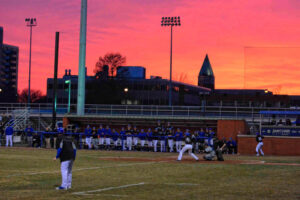 SLU baseball was held down by one of the best road teams in the country. (photo/SLU Athletics)

Led by Dylan Becker’s career-best four-hit game and 6.2 innings of relief from Sam Perez, Missouri State extended its win streak to six games Tuesday with an 8-2 victory over Saint Louis at the Billiken Sports Center. MSU scored seven times in the last three innings to post its 18th comeback win of the season.

Becker, who finished the night 4-for-4 in his 200th game in a Missouri State uniform, recorded hits in his first three plate appearances before tying the game with a sacrifice fly in the top of the seventh. The senior infielder then sparked an eighth-inning rally with the first of three-consecutive run-scoring singles that turned a two-run lead into a 7-2 cushion.

Perez (6-1)  limited the Billikens (31-17) to a single run–a fourth-inning homer by Josh Bunselmeyer–while scattering six hits and striking out a career-high 10 batters.

The victory gave the Bears a final non-conference mark of 23-7 and hiked their road record to 15-4 heading into this weekend’s series with Southern Illinois in Carbondale. 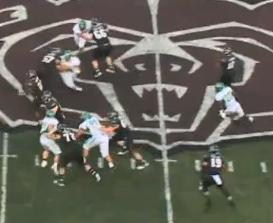 Missouri State used a shutdown defensive performance and a second-half scoring barrage to post a 38-0 victory over North Dakota before a record-setting crowd of 18,386 at Robert W. Plaster Stadium Saturday evening.

Playing its first home game in newly-refurbished Plaster Stadium, MSU built a 14-0 halftime lead thanks in large part to its defense, then pulled away with three touchdowns in a five-minute span in the second half to improve to 2-1 for the first time since 2009. Overall, the Bears’ defense limited UND 166 yards of total offense and just seven first downs, as the largest home audience in school history witnessed MSU’s first shutout victory since a 3-0 win over North Dakota State on Nov. 20, 2010.

Calan Crowder recorded his first career 100-yard rushing performance to help Missouri State tally a season-high 235 ground yards, and Kierra Harris tossed three second-half touchdown passes to put the game out of reach. The Bears forced a trio of UND turnovers on the night and piled up 247 total yards in the second half.

END_OF_DOCUMENT_TOKEN_TO_BE_REPLACED 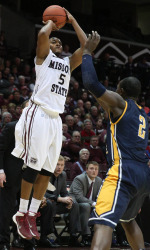 Missouri State rallied from an early 13-point deficit to lead by as many as nine points in the second half, but Murray State scored four points in the final 20 seconds to steal a 66-63 win in the opening round of the CollegeInsider.com Postseason Tournament at JQH Arena in Springfield on Wednesday night.

Cameron Payne scored gave the Racers their first lead of the second half with 19.6 left in the game, giving Murray State a 64-63 advantage. Payne, the Ohio Valley Conference Freshman of the Year, hit two free throws with seven seconds remaining to give Murray State the three-point lead. Missouri State’s in-bound pass from senior Nathan Scheer to Christian Kirk ended up in traffic without a final shot going off.

The Bears got 13 points from senior Jarmar Gulley, 12 points and 5 assists from Dorrian Williams and 11 points from Tyler McCullough. Gulley finished his two-year Missouri State career with 806 points to rank 45th on the club’s all-time scoring list – 12th among two-year players. Ruder splashed home his 72nd 3-pointer of the season to finish tied for third all-time among Missouri Valley Conference freshman in scoring beyond the arc.

The Bears finished 14-3 at home on the season and improved 9 games over last season’s 11-22 ledger while registering the program’s third 20-win campaign in five years. 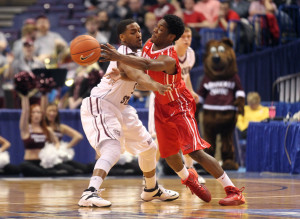 Missouri State Bears Jarmar Gully reaches in on Illinois State Redbirds Paris Lee in the first half of the Missouri Valley Conference Tournament at the Scottrade Center in St. Louis on March 7, 2014. UPI/Bill Greenblatt

Missouri State freshman Austin Ruder matched his career-high with 21 points as the fourth-seeded Missouri State held on for a 53-48 win over fifth-seeded Illinois State in the Missouri Valley Conference tournament quarterfinals at Scottrade Center in St. Louis.  The Bears (20-11) face top-seeded and second-ranked Wichita State (32-0) in the semifinals. 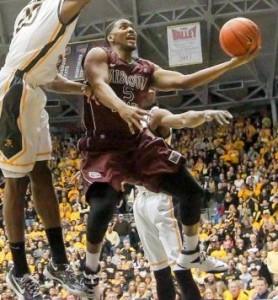 Unlike the first meeting between these two teams at JQH Arena on January 11, when Missouri State took Wichita State to overtime, the Bears couldn’t hit shots early, fell behind and could never get their way back into this one, as the 2nd ranked Shockers cruised to a 68-45 win.

Wichita State (31-0, 18-0) became the first team since Saint Joseph’s in 2004 to enter its league tournament unbeaten. The Shockers will have a first-round bye at the Missouri Valley Conference in St. Louis next week. The Shockers are off to the best start by a Missouri Valley team since a Larry Bird led Indiana State won its first 33 games and fell to Michigan State in the 1979 title game.

Jarmar Gulley scored 15 points to lead Missouri State, as the Bears missed 18 of its first 22 shots and finished shooting 31% for the game. Missouri State also missed the first seven attempts from three-point range.

Missouri State started all four of its seniors who combined for 30 points in a 72-56 conference win over visiting Loyola Chicago. The Bears (19-10, 9-8 MVC) got a double-double from Jarmar Gulley – his sixth of the league season – and 14 points from fellow senior Keith Pickens.

For the second game in a row MSU never trailed, and the Bears held off a late rush by the Ramblers in the final two minutes, but the Bears closed out the game on a 6-0 run, to avenge an earlier loss to the Ramblers.

The Bears will conclude the regular season Saturday at 1 p.m., against No. 2-ranked Wichita State (30-0, 17-0 MVC) at Koch Arena. The game will be televised nationally on ESPN or ESPN2.

Jarmar Gulley scored 24 points, and Austin Ruder added 12 for Missouri State, but the Bears (17-10, 7-8 MVC) couldn’t overcome a season-high 21 turnovers in a 67-63 loss at Illinois State Tuesday. MSU battled back from a 13-point halftime deficit to take their first lead of the second half at the 9:44 mark only to have ISU come right back for the next four points to take a 49-46 lead.

Ruder hit a pair of go-ahead 3-pointers on back-to-back possessions, the last, made it a 58-56 contest with just 4:52 remaining.  But with Illinois State in the double bonus, the Redbirds took advantage with seven free throws as part of a pivotal 9-0 run over a four-minute span.

The Bears will return home to JQH Arena for their next two games, starting at noon on Saturday with a nationally-televised game against Indiana State (20-6, 11-3 MVC) on ESPNU.

The Bears certainly missed sophomore guard Marcus Marshall who underwent season-ending surgery Wednesday morning to repair a torn meniscus. His 14.3 points per game average we missing in the 15-point loss.

Indiana State got 10 assists from Jake Odum, including 9 in the first half, and finished an even 26-for-52 from the field with 7 3-pointers. The Bears out-rebounded the Sycamores by a 33-32 margin and committed just 10 turnovers.

The Missouri State Bears kick off their 102nd season of varsity football Thursday (Aug. 29) when they host Southland Conference foe Northwestern State in a 6:05 p.m. contest at Plaster Field in Springfield. Eighth-year head coach Terry Allen returns 40 lettermen and 17 starters from 2012, when his MSU club won three of its last five games.  Under Allen the Bears are 4-3 in home openers and 2-5 overall in season openers; NSU has lost seven straight road games dating back to 2011.

Thursday’s contest marks the first official night home opener since 2009; MSU has been playing home games under the Plaster Field lights since 1951, compiling a 131-151-11 overall record at night and a 19-14-3 mark in Thursday games.

Missouri State and Northwestern State have split two previous meetings (both season openers), with NSU claiming a 24-8 win in Natchitoches in 1988, and the Bears returning the favor the following year with a 20-10 decision over the eighth-ranked Demons at Plaster Field.

Schaffitzel was a consensus preseason All-America choice after leading the Bears with 109 tackles and fi ve interceptions to rank 23rd and 10th nationally in those respective categories a year ago to earn All-America and the CFPA’s FCS Defensive Back of the Year honors; the junior was also named to the Buck Buchanan Award watch list over the summer.

On the offensive side of the ball, MSU returns an experienced cast that accounted for 100 percent of its rushing and passing yardage a year ago, led by Buford’s 642 receiving yards on 59 catches (good for second in school history), Ryan Heaston’s (So., RB, Cordova, Tenn.) 424 rushing yards and the quarterback duo of Ashton Glaser (Sr., Springdale, Ark.) and Kierra Harris (Jr., Texarkana, Ark.), who combined to throw for 2,218 yards.

Missouri State was 3-1 when scoring 20 or more points last season and 0-8 when producing less than 20 points.