You are here: Home / Archives for Missouri S&T

Dr. Janet Kavandi has come a long way from the small cattle ranch she grew up on in southwest Missouri’s Cassville. In fact, more than 13 million miles. Kavandi, a veteran of three space shuttle missions, is the 97th person to be inducted into the U.S. Astronaut Hall of Fame. She joins a collection of famous astronauts like John Glenn, Neil Armstrong and Buzz Aldrin in the prestigious hall.

Kavandi was a member of NASA’s 15th class of astronaut candidates, selected in 1994. Her first mission to space was on the shuttle Discovery in 1998. She has logged more than 33 days in space, traveling more than 13.1 million miles in 535 Earth orbits. 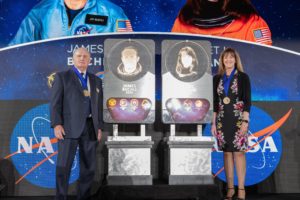 Inside the space shuttle Atlantis attraction at NASA’s Kennedy Space Center in Florida last month, Kavandi and former NASA astronaut Jim Buchli were selected by a panel of Hall of Fame astronauts, former NASA officials, historians and journalists. She considers her induction one of the greatest honors of her life.

“This is the cherry on top,” she says.

Kavandi said she cherished the childhood moments she shared with her dad in Cassville and the gifts he gave her – doctor kits instead of dolls.

“We often sat under the night sky identifying constellations and marveling at the Milky Way, which we could see in the country in Missouri. We would watch points of light lighting along their stationary counterparts and we wondered who was up there,” she said.

Kavandi says her amazing family at home and work have been the key to everything.

“It’s not easy to watch your spouse, or your parent or your sister blast off the Earth on a rocket in a trail of smoke and fire. We, the lucky few here, got to be on the fun side of things. We got the shaking and the rolling and we were rewarded with a magnificent view of the planet once we reached the orbit,” she says. “How unnerving, however, it was for those standing on the rooftops. It’s the families that really deserve the medals. We had the fun part and they had the really hard part.”

Kavandi attended Missouri Southern State University in Joplin and Missouri S&T in Rolla. She worked for EaglePicher Technologies in Joplin and later developed energy storage devices for spacecraft at Boeing.

View the video of the Hall of Fame ceremony here. 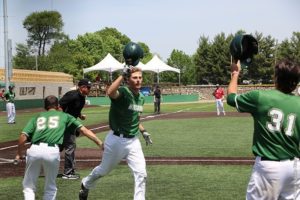 Missouri S&T’s saws their NCAA Division II Midwest Regional run come to an end Monday afternoon, as the Miners lost 10-5 to Southern Indiana in the championship game of the tournament.  The loss ends the Miners’ best season in school history with a 39-19 record as S&T – the champion of the Great Lakes Valley Conference’s West Division – reached the regional title game for the first time ever.

S&T had won four consecutive elimination games to reach Monday’s championship round, but the pitching staff wore down after playing five games in four days.  S&T allowed three runs in the bottom of the 1st, two more in the 4th and then three in the 5th.

S&T took a 2-0 lead on a first inning homer by Nick Ulrich and tied the game at 3-3 in the 2nd.  That’s as close as the Miners would keep it.  Ulrich later homered for his second of the game, breaking the Miners’ single season record for home runs with his 10th of the year. 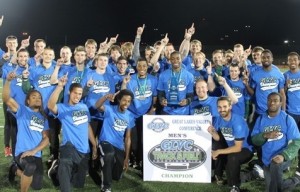 The Miners won their second GLVC title since joining the league on the strength of not just the six first place finishes, but also five second place performances over the two days. S&T finished the meet with 172 points, easily outdistancing four-time defending champion Indianapolis by 48 points.

Two of the six event wins came from Adriel Hawkins (Jefferson City, Mo./Jefferson City), who completed an indoor-outdoor double in the 200-meters Saturday to go with his win Friday in the triple jump. Hawkins, who had the best time in the preliminaries of the event Friday, won the final in a time of 21.70 seconds for his second outdoor 200-meter title.

The other winning performances Saturday for the Miners came from Jusean Archibald (Bridgeton, Mo./Trinity) in a highly-competitive 110-meter hurdles race and from Trevor King (Union, Mo./Union) in the decathlon.

Before Indianapolis’ four-year run as league champion, the Miners were the last team to capture the GLVC title when it won the 2009 meet. 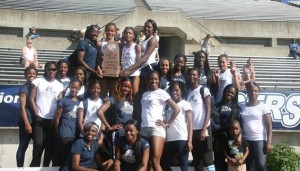 For the fourth year in a row, the Lincoln women’s outdoor track & field team is an MIAA champion. Competing at their home track, Dwight T. Reed Stadium for the first time since 1999, the Blue Tigers won the 2014 MIAA Outdoor Track & Field Championship on Sunday, marking the fourth time in the past four years that LU has accomplished that feat. The Blue Tigers scored 182 points to win the team title over second-place Central Missouri (104.50 points) by more than 70 points.

Donna-Lee Hylton set two automatic qualifying times at the league championships, including in the 400m dash, which she won in 53.16. Tamara Keane was the runner-up in that race, clocking in at 53.75, while Willomena Williams came in sixth (54.94) and Palmer placed seventh (55.86). Hylton, Keane and Williams later teamed with Marcia Harrison to win the 4x400m relay in 3:38.15, another automatic time.

The Blue Tigers also swept the two hurdle events, with Juneille Barker taking the 400m race in an automatic qualifying time of 58.69. Ladonna Richards placed third in the 400m hurdles at 59.7 and Keane finished fourth at 1:00.44. Richards was the winner of the 100m hurdles, finishing with the top time of 13.54. Barker was the runner-up in the 100m event, clocking in at 13.70, while Nadia Harriott came in seventh (14.68).

Jonelle Campbell and Nickeisha Beaumont both had third-place results in field events. Campbell took third in the triple jump (11.95m) while Beaumont took third in the long jump (5.89m). Daniele Newman competed in several field events, finishing fourth in the triple jump (11.85m), ninth in the high jump (1.64m) and 12th in the heptathlon (4,207 points). Shakeisha Miller took fifth in that last event, earning 4,756 points, and also placed 10th in the long jump at 5.51m.