You are here: Home / Archives for Missouri S & T 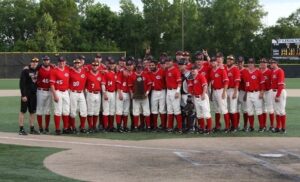 The Mules were picked to finish third in the MIAA Preseason Coaches Poll and were unranked in every poll in the preseason. 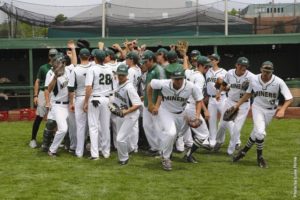 Missouri S & T had its best season in program history finishing 39-20.  They were champions of the Great Lakes Valley Conference’s West Division – and reached the regional title game for the first time ever.

The Miner’s run at an NCAA Division II Midwest Regional title ended against Southern Indiana a 10-5 loss in the championship game of the tournament. 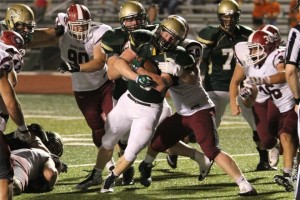 A slow start proved to be costly to Missouri S&T in its season opener Thursday night, as a second half comeback effort fell short in a 40-27 loss to Chadron State at Allgood-Bailey Stadium.

The visiting Eagles had the ball for better than 20 minutes of the first half and built a 17-0 lead in the process, then extended that advantage to 31 before the Miners scored 27 of the game’s final 36 points.

Chadron State scored on the game’s opening possession on a 33-yard field goal by Randy Wentz and was driving for another potential score before Austin Truvillion (Kansas City, Mo./Park Hill) recovered a fumble by Cody Paul to halt that drive.

However, the Eagles reached the end zone on back-to-back possessions early in the second quarter, getting touchdowns on a one-yard by Derek Jackson and a three-yard scoring pass from TD Stein to Kyle Vinich.

An interception by Cole Montgomery in S&T territory on the Miners’ first possession of the second half set up the second of Jackson’s three touchdown runs; his third with 5:43 left in the third quarter gave the Eagles their 31-point lead.

The Miners got on the scoreboard the next time they got the ball, as on a third-and-one play, Chris Kennard (Plano, Texas/Parish Episcopal) broke past the line of scrimmage into an open secondary and raced 42 yards for a touchdown. S&T scored again on its next possession early in the fourth quarter as Dalton Major (Bourbonnais, Ill./Bishop McNamara) crashed over from the three to cut the lead to 31-13 as a two-point conversion attempt failed.

END_OF_DOCUMENT_TOKEN_TO_BE_REPLACED 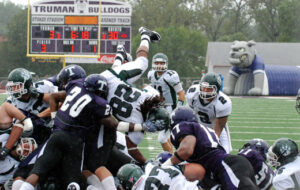 The polls could not agree in the third place spot as Central Missouri edged Central Oklahoma by just one point for third place in the coaches poll while the Bronchos were third for the media. Missouri Western racked up 350 points to be picked fourth by the media while UCM was six points behind them in the fifth spot in the media poll with the Griffons earning the fifth spot in the coaches opinion.

Sixth place was agreed upon by both polls as Fort Hays State earned 284 points from the media and 71 points from the coaches. Their was a tie in the poll for the coaches at seventh place as Turnpike Tussle Rivals Emporia State and Washburn each earned 59 points. In the media poll the Hornets edged the Ichabods by just 13 points.

END_OF_DOCUMENT_TOKEN_TO_BE_REPLACED 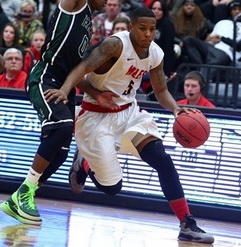 The Mules improve to 3-0 with a win over the Miners. (photo/UCM Athletics)

The defending Division II national champion Central Missouri men’s basketball team remained undefeated, after using a big first half run to lead them to a 93-70 win over Missouri S&T on Tuesday night at the UCM Multipurpose Building. Missouri S&T is 1-1 on the season, the Mules, 3-0. Marcus Walden gave Missouri S&T a 31-30 lead on a layup and one with 4:08 to play in the half, but UCM closed the half on a 17-0 run to lead 47-31 at the intermission.

The Mules held Missouri S&T to 37 percent shooting from the floor, 26-of-70, and 18 percent from beyond the arc, 3-of-16. The Miners were 15-of-19 at the charity stripe for 78 percent. Zach Ellis led three Miners in double figures with a game-high 19 points. Desmond Buerge had 16 points and Walden added 15 points and a team-high nine rebounds.

Lane Haller’s 79-yard interception return off Miners QB Reed Brown in the second overtime won the game for 20th ranked Chadron State. The teams combined for just over 1,000 yards of total offense, with the Miners rallying three times from deficits.

The Eagles got the first possession in overtime and needed only three plays to score as Glen McLain threw a seven-yard touchdown pass. But the Miners answered right back with a four-play scoring drive, as a 19-yard pass to Melvin Stovall set up a one-yard touchdown run by Zenel Hudson to even things at 34-34. S&T took possession to open the second overtime and on the second play, Haller jumped in front of Brown’s pass and ran down the sidelines 79 yards for the game-ending score. 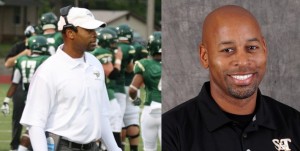 David Brown, who guided Missouri S&T’s football team to its best season in more than three decades in 2012, is stepping down from the head coaching post as he has accepted a position on the staff at Fresno State University.

Brown will join the Bulldogs’ staff as a defensive secondary coach after spending the last three seasons as the Miners’ head coach. He led S&T to a mark of 19-14 in those three years which included a 10-1 record and a No. 24 national ranking in the final American Football Coaches Association poll in the 2012 season.

“My family enjoyed our time in Rolla and coaching at Missouri S&T,” Brown said. “We appreciated the friendly supportive people around town and campus. I can’t say enough about the players that I was able to coach. They are great young men and will definitely be successful in life. They were a great group to work with every morning. We were able to accomplish a lot in a short period of time.”

END_OF_DOCUMENT_TOKEN_TO_BE_REPLACED

In the final Division II football Top 25 rankings that were released by the American Football Coaches Association, Missouri Western from St. Joseph finished 5th at 12-2 , Northwest Missouri State from Maryville finished 10th at 10-3 and Missouri S & T from Rolla finished 24th after going 10-1.

The Miners, who finished the season at 10-1, were the only team that did not participate in a post-season game that was in the final poll for the season. Missouri S&T tied its single-season record for victories with 10 and also set a one-year scoring record with 458 points as it finished second in the Great Lakes Valley Conference to Indianapolis, who was ranked No. 15 in the last poll.

The Bearcats finish ranked 10th after their ninth straight 10-win season and advancing to the NCAA Division II playoffs. It was also the ninth straight trip to the NCAA playoffs for Northwest – the longest current streak in NCAA – as the Bearcats advanced to the second round before falling to Minnesota State Mankato in a double overtime thriller.

Missouri S&T’s hopes of making the field for the NCAA Division II football playoffs fell short, as the Miners were not selected as part of the field despite its 10-1 regular season record.

The Miners finished the season with a six-game winning streak and tied the school record for victories in a year with the undefeated 1980 squad after beating South Dakota School of Mines 66-17 to finish the year on Saturday. However, the Miners, who were ranked seventh in each of the last two NCAA Super Region Four rankings, could not jump over any of the teams ahead of them in the rankings as all six teams that held those spots in last Monday’s rankings recorded victories on Saturday.

MissourI S&T finished the season in second place in the Great Lakes Valley Conference to Indianapolis, who handed S&T its only loss of the year on Sept. 29. The Greyhounds were the only GLVC team chosen for the playoffs.

Tyrone Smith made the most of his final attempt of the afternoon Friday, using a seasonal-best jump of 7.97 meters (26 feet, 1¾ inches) to qualify for the finals in the long jump at the Summer Olympics.

Smith, a 2007 Missouri S&T graduate who is representing his native country of Bermuda at the Olympics, hit his mark on the last of his three qualification jumps to finish in 10th place among the 40 competitors in the preliminaries. Only the top 12 finishers on Friday advanced to the finals, which will take place Saturday at 1:55 p.m., Central time, at the Olympic Stadium.

On his first jump of the day, Smith posted a mark of 7.73 meters (25-4½), then recorded a slightly better jump of 7.75 meters (25-5¼) in the second round. On his last jump – competitors are given only three jumps in the preliminaries – he posted his mark of 7.97 into a slight headwind to vault into eighth place at the time.

Two jumpers that followed Smith passed his mark on their final attempts, but Smith was able to hang onto the 10th place position to earn the opportunity to jump again on Saturday. Smith is guaranteed a higher finish at this Olympic competition after finishing 15th in the event at the 2008 Olympic Games in Beijing, China.

The top marks in the preliminaries came from Brazil’s Maura Vinicius Da Silva and Marquise Goodwin from the United States, as each had a jump of 8.11 meters or 26-7¼. The last qualifier was Germany’s Sebastian Bayer, who had a top mark of 7.92 meters (26 feet) and a second-best jump of 7.88 meters (25-10¼) to break a tie with fellow countryman Christian Reif. 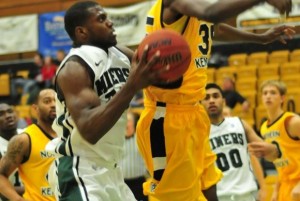 After scoring on two of its first four possessions of the game Thursday night, the Missouri S&T men’s basketball team was stifled by Northern Kentucky’s defense for the remainder of the first half as the eighth-ranked Norse recorded a 62-36 win over S&T at Billy Key Court.

Michael Jackson (Wichita, Kan./Wichita East) threw down a dunk 27 seconds into the contest to put the Miners in front, then after the Norse got a three-pointer from Tony Rack, Tommy Pelczynski (Nashville, Ill./Nashville) knocked won a jumper to put S&T back into the lead. But after Pelczynski’s basket at the 16:54 mark, the Miners made only one more shot from the field over the balance of the half – going one-of-13 and committing 11 turnovers in that span.