You are here: Home / Archives for Missouri Right to Life

Two well-known Republicans are running in the August GOP primary to replace term-limited State Sen. David Sater in southwest Missouri. No Democrats have filed, which means the GOP primary winner will be the next senator from that district. 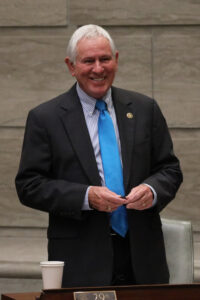 Moon, who was elected to the Missouri House in a special election in April 2013, says he’s focused on ending abortions in Missouri.

“I believe that at the point of conception that is a result of a unique human individual with separate unique DNA, and they should be protected by law,” Moon says.

Moon says the government’s primary purpose is to protect the liberty of the people and to protect their property. His priorities also include eliminating the corporate tax, and ending what he calls burdensome regulations on farmers, businesses and residents.

Moon’s opponent is Cole, who served as the Missouri Republican Party chairman from 2009-2013. His priorities include education and workforce development.

“And being able to put together an environment where businesses can thrive and people can have good jobs, support their families,” Cole says.

Cole says the COVID-19 pandemic has had a major impact across the state. He’s focused on the economy and getting Missourians back to work.

Abortion is a major issue in the August Senate primary. During an interview with Missourinet, Representative Moon accuses the Cole campaign of “stretching the truth” in campaign mailers, including on abortion.

“I am the most conservative, most constitutional and most pro-life legislator in Missouri, and I’m the most of those three in this particular Senate race too,” says Moon.

Moon filed a proposed constitutional amendment in January 2019, regarding the right to life. He said at that time that passage of House Joint Resolution 28 “will begin the process of ensuring that all unborn children will be afforded the opportunity to live and prosper in Missouri.”

That bill did not receive a House committee hearing in 2019. He also filed legislation this year abolishing abortion in the state.

“When we (the Cole campaign) make statements that Missouri Right to Life rated him (Moon) the lowest-ranked Republican in the House last year, that is not stretching the truth. Those are facts,” says Cole.

Cole also says Representative Moon is the only Republican who voted “no” on abortion legislation during a 2017 special session called by then-Governor Eric Greitens (R).

The GOP primary winner will replace Sater, who was elected to the Missouri Senate in 2012 and was re-elected in 2016. Sater also served in the Missouri House from 2005 to 2012. He’ll leave office at the end of December.