Missouri House Democrats say the winds of political change are blowing in the Show-Me State, and they’re predicting change at the ballot box in November for the Missouri House. 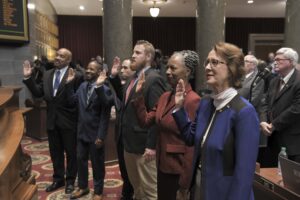 “What that says to us (House Democrats) is that folks are frustrated with the extremes of the Republican Party in Missouri,” Quade recently told Capitol reporters in Jefferson City.

The district, which is in west St. Louis County, was formerly held by Missouri Republican Party executive director Jean Evans.

“So what that means for the upcoming elections is we’re going to continue to talk about the extremism that’s happening here, and the things that Missourians deserve and are asking for, like health care among many other things,” Quade says.

While Quade has described the 99th House district as a “solid red district”, Evans has noted that former U.S. Sen. Claire McCaskill (D) received more votes than Republican challenger Josh Hawley in that district in 2018.

One key issue for Democrats is Medicaid expansion, an issue Gunby campaigned on. Quade says Democrats will also focus on growing gun violence.