The White House coronavirus response coordinator says Missouri is one of the 20 states she’s visited in the past six weeks, to provide guidance on COVID-19. 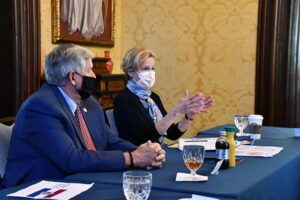 Dr. Deborah Birx participated in a roundtable discussion with Governor Mike Parson and Cabinet members in Jefferson City on Tuesday. They were joined by State Department of Health and Senior Services (DHSS) officials and by community and school leaders.

Dr. Birx also held a press conference on Tuesday with reporters at the Missouri Capitol, after the roundtable.

“This box-in strategy that is being used here in Missouri I think really is an important example of how to really protect vulnerable individuals,” Dr. Birx says.

As of today, 468 long-term care facilities in Missouri have experienced at least one positive case of COVID-19, either among residents, staff or both.

DHSS says that since implementing box-in testing, Missouri has seen a significant decrease in its COVID-19 observed case fatality ratio. Governor Parson says that during April and May, more than seven percent of all observed cases each month in Missouri were fatal. In June, that number dropped to less than two percent. Parson says it’s now less than half a percent in August.

Dr. Birx says Centers for Disease Control and Prevention (CDC) staff are heading to Missouri, to help the Show-Me State in battling the COVID-19 pandemic. Missourinet asked Dr. Birx about the the CDC personnel, during the press conference.

“We have been sending out what we call these craft teams that work on COVID directly city by city. I believe they may be going to St. Louis, but I will look that up. Or Kansas City, to really go to cities before they get into serious situation,” says Dr. Birx.

DHSS says Missouri has now had 69,417 confirmed COVID cases, which is up from Monday’s number of 68,623. St. Louis has reported 181 COVID deaths, while St. Louis County has reported 705 deaths.

Kansas City has had 87 COVID deaths.

Dr. Birx emphasized several times the importance of wearing a mask and social distancing. She is also suggesting that Missouri follow Texas’ model, which requires masks in counties with more than 20 cases. Governor Parson says he will review the Texas model.

Dr. Birx finished her press conference, by urging all Missourians to do their part in fighting the pandemic.

“It doesn’t matter if you are a Democrat or a Republican. You need to wear a mask and socially distance. You need to not have parties in your back yard and in your living room,” Dr. Birx says. “And we need to stop the spread of this virus because we can and we will together, while we work on developing a vaccine together.”