You are here: Home / Archives for Missouri Nurses Association

Missouri lawmakers in both parties are expressing frustration about the growing number of assaults against health care employees across the state. Numerous health-related associations are backing legislation that’s aimed at addressing it. 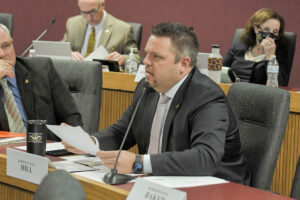 While no one testified against the bill, numerous groups testified for the bill, which is aimed at protecting health care employees against assaults.

The 110,000 member Missouri Nurses Association testified for Hill’s bill, telling lawmakers that incidents are happening all the time.

“It is more dangerous to be a health care worker than it is to be a police officer or a prison guard,” Missouri Nurses Association state director Heidi Lucas testifies. “They are more likely to see violence than those folks.”

Ms. Lucas also testifies that her brother, who works in the health care field, has already suffered three concussions this year, from patients. She says he’s been head-butted, punched and bitten.

Several nurses also traveled to Jefferson City on March 2 to testify for Hill’s bill. One testified about an assault where a man allegedly kicked a pregnant nurse in the abdomen, trying to kill her baby.

“In this last year, CoxHealth has seen 649 assaults on our property resulting in 364 injuries. Unfortunately, that number is up every single year,” Grote testifies.

CoxHealth, which operates six hospitals and more than 80 clinics across southwest Missouri, also says that a number of health care employees choose not to file complaints because they fear retaliation and further actions by the attacker.

MHA released an eight-page report in 2019, which found that 48 percent of hospitals reported workplace violence or violent intruders as one of their top three internal risks.

Hill is currently working to tweak some of the language in HB 1022. It’s expected return to his Insurance Committee for a vote sometime after the legislative spring break.